Please ensure Javascript is enabled for purposes of website accessibility
Log In Help Join The Motley Fool
Free Article Join Over 1 Million Premium Members And Get More In-Depth Stock Guidance and Research
By Adam Levine-Weinberg - Jan 15, 2016 at 10:30AM

The top global airline's $3.58 billion in share buybacks during 2015 was just the beginning.

During 2015, American Airlines (AAL 1.73%) spent enormous sums of money on share repurchases. With interest rates at extremely low levels and American Airlines stock trading for 6 to 7 times earnings for most of the year, management reasoned that it was a great time to buy back stock.

By contrast, Delta Air Lines (DAL 1.59%) has been much more circumspect about buybacks, despite producing far more free cash flow than American Airlines. Its stock price significantly outperformed American's in 2015. 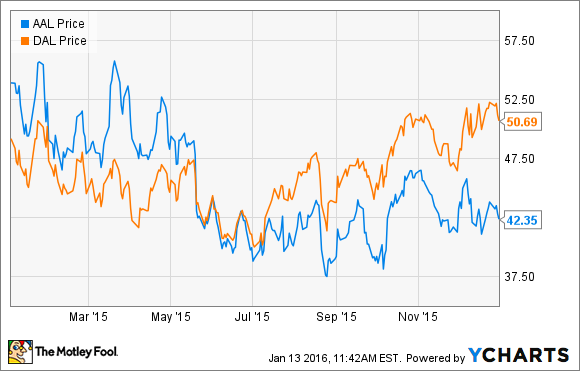 American Airlines appears likely to continue its massive buyback activity in 2016. But does the stock's underperformance in 2015 mean that it should be following Delta's lead and focusing more on debt reduction?

Becoming a buyback beast
As its stock price plunged during the spring and summer of 2015, American Airlines began repurchasing stock at a furious pace. In Q3, with the stock price at its lowest level of the year, management spent more than $1.5 billion on buybacks. 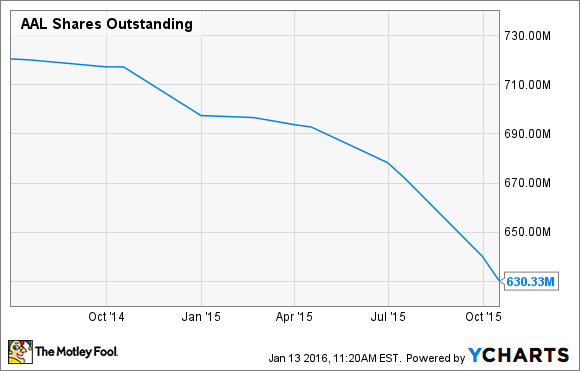 The heavy buyback activity continued in Q4. American Airlines recently revealed that it spent $1.1 billion to repurchase 25.6 million shares last quarter. For all of 2015, it spent $3.58 billion and repurchased 85.1 million shares -- more than 12% of its share count.

Borrowing to fund buybacks
American Airlines has generated a sizable $6.8 billion in operating cash flow over its last four reported quarters. However, it incurred more than $6 billion in capital expenditures during 2015, due to its aggressive aircraft replacement program.

That left very little free cash flow to pay for share buybacks. Instead, American funded them by paying for most of its aircraft purchases with debt instead of cash. American Airlines CEO Doug Parker has been vocal about his belief that as long as the company can issue debt with a 4% or lower interest rate, it should take advantage of that opportunity.

Delta takes a different path
Delta Air Lines' management team has followed a very different philosophy. To be sure, Delta also returned a hefty sum of money to shareholders last year. Between dividends and buybacks, it spent $2.6 billion in 2015. However, Delta produced nearly $4 billion in free cash flow.

Delta has been careful to spend within its means. Image source: The Motley Fool.

In other words, Delta produced enough cash to cover its comparatively modest capital spending, pay for its dividends and buybacks, and still have some left over to reduce its net debt. That's a far cry from the situation at American Airlines.

The American Airlines strategy makes sense
As noted above, Delta Air Lines stock significantly outperformed American Airlines shares in 2015. However, that doesn't necessarily mean that its capital allocation strategy is better. Delta's stronger unit revenue performance probably had a bigger impact on the stock price divergence. Additionally, because Delta has a higher market cap, its buybacks provide less bang for the buck.

American Airlines stock is extremely cheap at about 6 times forward earnings. Chances are it won't stay that way forever. As long as interest rates remain low -- and they still are -- it makes sense to borrow money and buy back stock today and focus on debt reduction in 2018 and beyond, when free cash flow is likely to surge due to falling capex.

Just this week, the company launched a $1.07 billion aircraft-backed debt offering at a blended interest rate just above 4%. Assuming market conditions remain favorable, it will probably execute another two debt offerings along these lines before the end of 2016.

American Airlines currently has $2.4 billion in outstanding share repurchase authorizations. But combining American's free cash flow, the aircraft debt it will raise, and some of its excess cash (it ended the year with $6.2 billion in unrestricted cash), the company will have the capacity to spend at least as much on share buybacks in 2016 as the $3.58 billion it spent in 2015.

That means American Airlines is likely to increase its buyback authorization in the next quarter or two. The continuation of its aggressive buyback strategy will keep its share count declining rapidly. As long as American can stabilize its unit revenue performance this year, the stock is likely to regain its momentum.