Please ensure Javascript is enabled for purposes of website accessibility
Log In Help Join The Motley Fool
Free Article Join Over 1 Million Premium Members And Get More In-Depth Stock Guidance and Research
By Reuben Gregg Brewer - Jan 15, 2016 at 8:15AM

Teck Resources is still fighting to survive, but it's gaining some breathing room.

Teck Resources (TECK 0.61%) has been pulling back hard to keep itself afloat. That's included sharing the pain with shareholders via two dividend cuts last year. Is this enough to ensure Teck makes it through to the other side of this deep commodity downturn?

It's bad
In a December presentation, Teck outlined just how bad the current commodity downturn is. For example, zinc is facing its "longest" downturn since the 1920s. Copper's malaise is the "deepest" since the 20s. Steel making coal, for its part, gets both designations, with a "long and deep" down cycle.

These are just amorphous words. How about some numbers? 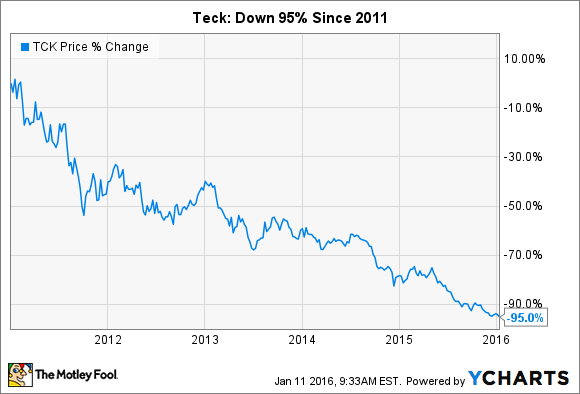 But the real pain shows up on the bottom line. In 2011, Teck had a profit of around $2.7 billion. That number fell to $400 million in 2014, and it looks like red ink will rule the day in 2015 because of asset impairments. The company is still generating positive cash flow, which is a good thing. But that's down materially from its peak, too.

This is why the Canadian miner has been slashing costs -- and why it cut its dividend again. It's even been working with streaming companies like Franco-Nevada (FNV 0.91%) to bring in cash, getting $610 million today in return for an agreement to sell Franco-Nevada future silver production on the cheap from Teck's interest in the Antamina mine. That helps to shore up Teck's balance sheet, even if it means giving up the future benefits of that silver, not one of Teck's main products, to Franco-Nevada.

Teck has also partnered with GoldCorp (GG) on a 50/50 joint venture that brings together mines each has in Chile. This should help reduce costs for both companies in a big way, because they will be able to share infrastructure. To give an idea of how big a deal this is, Teck noted that the capital cost to bring the combined project into production is expected to be lower than earlier feasibility studies suggested either of the individual projects would cost.

The right moves: Are they enough?
To its credit, Teck is feeling pain and doing the right things to ensure it survives. But is it enough? Being cash flow positive is a good start, since it's cash that pays the bills. However, Teck has some big bills coming up, like its piece of the Fort Hills oil sands project. It still has to contribute around $1.5 billion there while paying all of the bills to keep its other mines up and running. The company should end 2015 with around $1.8 billion of cash, according to its projections. So, there's not a lot of wiggle room right now, but there is some.

Teck has a year before some big debts come due. Image source: Teck.

For example, the company has no debt due in 2016, which helps a lot. But it's got $600 million due in 2017, with roughly $500 million in each of the following two years. At the end of the third quarter, long-term debt totaled around $9.2 billion, and while that's up 15% year over year, it's still a reasonable 35% of the capital structure.

One of the big benefits of the dividend cut, however, is the cash it frees up to pay things like interest expenses. In 2014, Teck paid out over $500 million in dividends. That number shrank in 2015 with the dividend cuts, but based on a $0.10 a share annual dividend run rate, the total cost of dividends in 2016 should be around $60 million. So, in two years, Teck has reduced the cash outflow from dividends by almost $450 million -- it paid roughly $400 million in interest in 2014. Interest expense will be higher in 2015 and, more importantly, 2016, but the dividend cut is clearly making Teck's financial life a lot easier.

Good for now
For now, Teck appears to have bought itself some time through its cost saving moves and the recent dividend cut. But time is the operative word since it has big debt bills coming up starting in 2017 and it still has billions to pay for the Fort Hills project. If the deep and long downturns it's facing don't abate somewhat in 2016, 2017 could be difficult year.