In common with JPMorgan, the bank reported a mixed quarter with lots of moving parts. Here's the lowdown.

Given the combination of volatility equity markets, the Federal Reserve increasing interest, and uncertainty in the housing market, it's no surprise that Wells Fargo's (WFC -0.60%) fourth-quarter earnings were so eagerly anticipated. Indeed, there is a lot going on with its results. Let's sift through the noise and take a look at the key facts and numbers behind the quarter.

Wells Fargo earnings: The raw numbers
The best way to look at the bank's earnings is by separating its interest and non-interest income. As you can see below, pre-tax income rose a paltry 0.54% with the negative effects of rising credit loss provisions (net interest income) alongside noninterest income falling more than the decrease in noninterest expense.

Unfortunately, the efficiency ratio sequentially rose in the quarter to 57.4% compared to 56.4% in the third quarter, and management served notice that it would trade at the high end of the 55% to 59% range in 2016 -- something to look out for.

Provision for credit losses: Energy troubles?
JPMorgan Chase & Co. gave results earlier in the week and they prepared Wells Fargo investors with what to expect. In common with its peer, Wells Fargo reported a strong rise in credit losses. JPMorgan reported a $1.3 billion (49%) increase in credit loss provisions due to its energy and mining , whereas on the earnings release Wells Fargo outlined: "Credit losses were $831 million in fourth quarter 2015, compared with $703 million in the third quarter, mainly due to $90 million in higher oil & gas portfolio losses".

Clearly, the fall in commodity prices is having an impact on loans to the sector, but it's important to recognize that Wells Fargo's allowance for credit losses of $12.5 billion (or 1.37% of loans) is slightly lower compared to $12.6 billion (1.39%) at the end of September. Management argued that improving credit quality in its real estate portfolio offset deterioration in the energy sector.

Net interest margin
In banking industry jargon, it's known as the NIM. Representing the difference between the interest a bank's investments generates and its interest expense divided by its average interest earning assets. The NIM is a key determinant of a bank's income.

In usual cycles, NIM has a tendency to rise as the Federal Reserve raises rates, and banking investors cheered when JPMorgan managed to increase its NIM to 2.23% from 2.16% previously. Unfortunately, Wells Fargo couldn't do likewise. As you can see below, Wells Fargo's NIM declined to 2.92% from 2.96% the previous quarter and 3.04% in last year's fourth quarter. 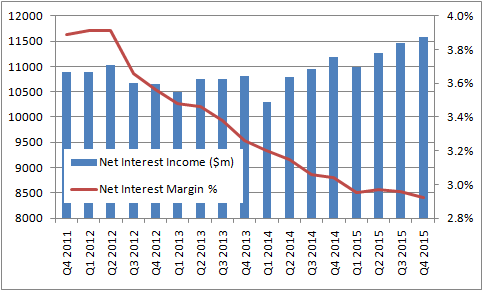 One of the reasons driving WFC's decreased NIM is strong deposit growth of 6% compared to a year ago. It's good news because Wells Fargo can use it to expand lending. However, the moderate economic environment isn't helping matters much.

Loan growth
A mixed picture. Although Wells Fargo reported broad-based year-over-year loan growth , there were some signs of weakening on a sequential basis.

Looking ahead
The bank needs a stronger economy in order to put the increased loan deposits to work and expand its NIM, particularly as there were signs of future slowing in consumer lending.

Moreover, investors will be closely following its efficiency ratio because guidance implies an increase from this year's 57.8% rate. Credit loss provisions due to the energy exposure in its portfolio are obviously a concern, but the overriding factor with Wells Fargo is the state of the economy and the U.S. housing market.