Please ensure Javascript is enabled for purposes of website accessibility
Log In Help Join The Motley Fool
Free Article Join Over 1 Million Premium Members And Get More In-Depth Stock Guidance and Research
By Jeremy Bowman - Jan 15, 2016 at 11:21AM

The Apple supplier keeps beating expectations. Will the streak continue in 2016?

What: Shares of Cirrus Logic (CRUS 2.38%) jumped 25% last year, according to data from S&P Capital IQ, as the stock recovered from a fractured partnership with Apple. As you can see from the chart below, the stock exploded throughout the first half of the year, continuing a run that began in the end of 2014. 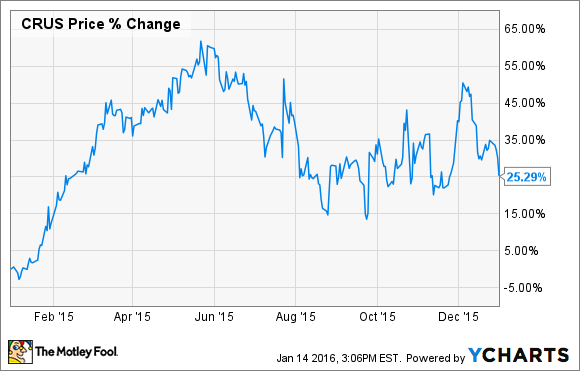 So what: Cirrus shares entered 2015 with momentum and anticipation of improved performance thanks to comments CEO Jason Rhode made at a conference in December 2014. The stock gained 13% in January, fueled by a strong earnings report at the end of the month as the audio-chip maker easily soared past analyst estimates. The stock also tracked at the beginning of year with the iPhone maker, which hit an all-time high in February, as Apple is responsible for 80% of Cirrus' revenue.

The stock jumped higher after its next earnings report as it again blew past estimates and issued upside guidance, pushing shares up 5% on the day. After hitting a peak just north of $38, it began to fade as it had already doubled in less than six months and bearishness about Apple seemed to overwhelm Cirrus stock. After another smashing earnings report in July, its stock was up nearly 20% in one day, but it quickly gave back those gains and fell below $30. In its final earnings report of the year, the company again blew past estimates, gaining 8% in one session but the gains were short-lived as Apple worries again overwhelmed it.

Now what: Investors can expect continued volatility as analysts consistently misestimate its results; the stock is tied to Apple's fortunes, and it tends to move as a more volatile version of its biggest customer. Considering the company's track of smashing estimates and its low P/E ratio of just 12 and big hopes for the iPhone 7, there are plenty of reasons to believe the stock will continue its winning ways in 2016.

These 3 Stocks Are Ridiculously Cheap