What: 2015 was a great year to be a shareholder of Ultragenyx Pharmaceutical (RARE 0.62%), a clinical-stage biopharmaceutical company focused on developing therapies to treat rare diseases. Investors enjoyed a 141% return during the year, according to data from S&P Capital IQ. 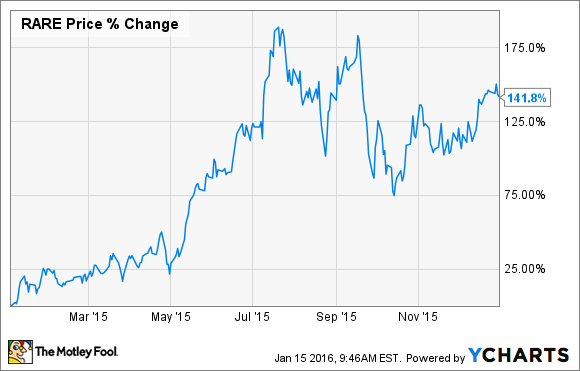 So what: Ultragenyx showered investors with positive updates all year long. Here are a few of the key announcements made during the year:

All this positive clinical news caused its share price to spike and the company took advantage of its good fortune by raising capital twice during the year. As of September, it held more than $580 million in cash on its balance sheet.

Now what: Investing in companies that specialize in treating rare diseases can be very profitable -- just ask shareholders of Alexion Pharmaceuticals (ALXN). Alexion Pharmaceuticals has been a multibagger for investors even though for years it only had one drug on the market that was only approved to treat two very rare diseases. That didn't stop it from generating billions of dollars in revenue, and the company has since grown to become a $36 billion behemoth.

If Ultragenyx Pharmaceuticals is ultimately successful at bringing a few of its compounds to market, then it's possible that it could become the next Alexion Pharmaceuticals. However, until it starts generating revenue from its compounds, it will remain a high-risk but high-reward investment.

Still, with all the great progress it made in 2015, I can understand why investors are so excited about this company's long-term potential.