Please ensure Javascript is enabled for purposes of website accessibility
Log In Help Join The Motley Fool
Free Article Join Over 1 Million Premium Members And Get More In-Depth Stock Guidance and Research
By Daniel Miller - Jan 16, 2016 at 10:00AM

Honda's Ridgeline is a quality pickup, but can it convince consumers to leave Detroit pickups behind? Don't count on it.

Media days at the 2016 North American International Auto Show wrapped up recently, and though the NFL Super Bowl is weeks away, for automotive journalists and analysts it was the auto Super Bowl. With roughly 50 global vehicle debuts and almost $7 million worth of the most cutting edge and luxurious automobiles on the planet, Detroit was one interesting place to be last week.

While it's extremely difficult to narrow down the most important vehicles from the show, as a valid argument can be made for just about all of the vehicles, here's one that hopes to eventually shake up a Detroit stronghold: Honda Motors' (HMC -0.95%) Ridgeline. However, it faces a long uphill battle.

If at first you don't succeed...
Not too long ago the mid-size truck segment in the U.S. market was all but dead. The Dodge Dakota was discontinued, as was the Ford Ranger, and General Motors had briefly axed production of its Colorado and Canyon. The segment leader, Toyota's Tacoma, hadn't been redesigned since 2007, which is long overdue in the automotive industry.

Oh my, how quickly things can change. Now, the Tundra is being redesigned, GM has brought its Canyon and Colorado back to the U.S. market and rumor has it that the Ranger will be available here within a few years.

Japanese automakers would love nothing more than being able to take a sizable chunk of full-size sales in the U.S. which has historically been completely dominated by Detroit automakers. The key might be to start winning sales of mid-size trucks, create a loyal consumer and then step loyal consumers up to full-size trucks later. That's what makes the Honda Ridgeline one of the most intriguing reveals in Detroit this week.

The second-generation Ridgeline is expected to go on sale in the U.S. this spring as a 2017 model and it comes at a great point in time with sales of larger vehicles, namely SUVs and trucks, are selling like hotcakes. However, it's yet to be seen how sales of mid-size trucks will fair after major automakers renewed their focus on the forgotten segment. 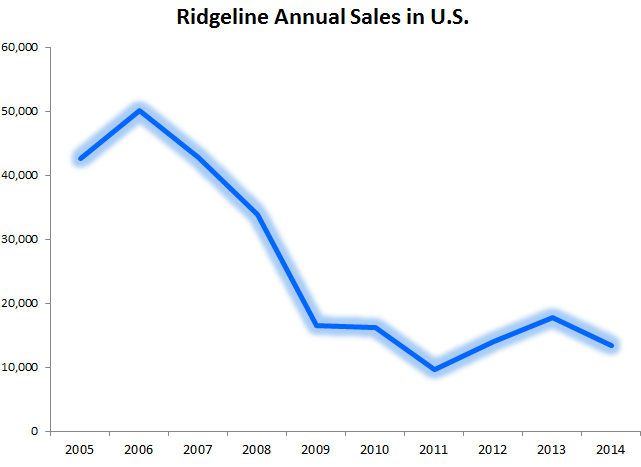 As you can see above, the initial response to the Honda Ridgeline was strong, but then it quickly dissipated as its funky exterior design failed to catch on with consumers over the long haul.

"This is expanding the product portfolio," said Tom Libby, manager of industry analysis at IHS, according to Automotive News. "They need to do that if they're going to be a long-term competitor to the Nissans and Fords and Toyotas."

While many analysts believe that the Honda Ridgeline is intended to win over consumers typically drawn to Toyota's Tacoma or Nissan's Frontier, rather than battle GM's mid-size trucks head on, it will have to do some of the latter to become a runaway success. Here's a look at how sales in the segment stacked up over the past decade, to better understand the challenge facing Honda's Ridgeline. 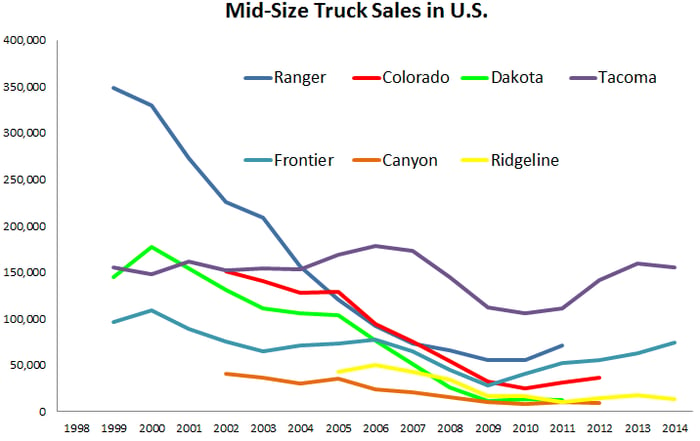 "We think we've got a better idea, a truck that uses its unibody construction and Honda packaging magic to deliver more of the things that many of today's truck customers want and need with none of the things they don't." said John Mendel, executive vice president of American Honda Motor Co.,, in a press release.

This is a big deal, because if any Japanese automaker finally figures out the trick to getting a foothold in the full-size truck market, even if that means succeeding in the mid-size market first, it will send shockwaves through Detroit's big three. That's because Ford and GM, and to a lesser extent FCA, have had a stranglehold on full-size truck sales and that dominance has generated high average transaction prices, revenues, and profit margins that investors have enjoyed for decades. Strong annual sales of pickup trucks is easily one of the best selling points to investors for Detroit automakers.

If Detroit automakers' dominance in the U.S. most profitable full-size truck segment begins to slowly decline, it will be a huge blow to long-term Ford and GM investors. The Ridgeline is Honda's latest attempt to get the ball rolling, but Japanese automakers have a long way to go before they're a real threat to Detroit automaker's bread-and-butter pickup market. That's because American truck buyers are incredibly loyal, and they want a Ford or GM, period.