One plausible theory is that the management change signals increased interest at the board level in pursuing a merger. Another theory raised by some analysts, including Helane Becker of Cowen, is that Fornaro will slow Spirit's growth rate. Becker believes that investors would appreciate such a move, because it would allow Spirit's newer markets to mature.

However, the best outcome for long-term investors would be if Spirit Airlines forges ahead with its rapid growth rate. That's the same strategy that allowed Southwest Airlines (NYSE:LUV) to go from upstart carrier to an industry leader -- thereby delivering a roughly 4000% return since 1990. 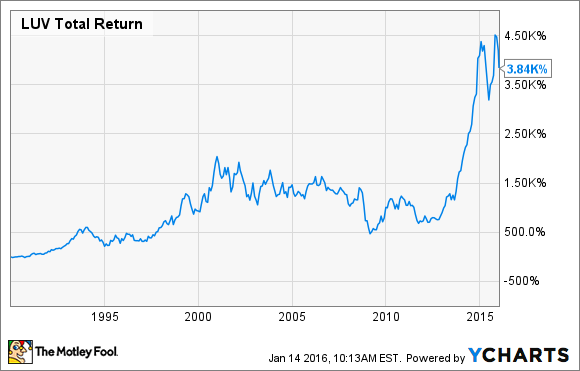 Investors panic about unit revenue
Spirit Airlines shares have lost more than half of their value since late 2014 as investors have become increasingly worried about falling unit revenue at the carrier. Through the first nine months of 2015, Spirit's revenue per available seat mile declined 14.4% year over year, including a 17.5% drop in Q3.

That might seem worrisome, but Spirit's unit costs have fallen even faster due to the sharp drop in fuel prices and the addition of more efficient planes to Spirit's fleet. Spirit expects its adjusted operating margin for 2015 to be up by about 3 percentage points from the record of 19.2% set a year earlier.

Indeed, the sharp drop in fuel prices played a big role in setting off some of the airline industry's price wars last year, contributing to the unit revenue decline. But it's important to recognize that airlines (including Spirit) didn't let their pricing battles get out of hand -- profit margins still rose to record levels across the entire industry.

Growth vs. short-term profit
Spirit's rapid growth rate is undoubtedly putting some pressure on its profit margin. New routes are substantially less profitable than mature routes. But the vast majority of Spirit's new routes will grow into mature, highly profitable routes within a year or so. This means that the short-term pain of faster growth is far outweighed by the long-term benefit of expansion. Spirit Airlines today is in a similar position to where Southwest Airlines was in 1990. That year, Southwest generated $1.2 billion in revenue -- roughly equal to Spirit's 2015 revenue after adjusting for inflation. Southwest ended 1990 with 106 planes in its fleet.

In the following decade, Southwest Airlines more than tripled its fleet size, ending 2000 with 344 planes. Capacity, as measured by available seat miles, grew at a 14% compound annual rate from 1990 to 2000. During the 1990-1995 period, capacity grew at an even faster 17% annual clip.

Southwest earned a profit during every year of this growth period. But in 1990 and 1991, it had a single-digit operating margin, and it wasn't until 1997 that Southwest Airlines' operating margin rose above the 15% mark. However, by 2000, its operating margin had reached 18.7% -- on a revenue base that had more than quadrupled since 1990!

Don't stop now
The lesson for Spirit Airlines is simple. As long as the company continues to produce double-digit operating margins, it should grow as fast as it feasibly can. That's how Southwest Airlines became the industry giant it is today.

If Spirit grows capacity at a 16% compound annual rate for the next 10 years, it would be twice as large by 2025 as if it grew at a more modest 8% rate. It might have a slightly lower profit margin, but it almost certainly wouldn't be 50% lower. It will therefore make a lot more money by maintaining a high growth rate, rather than by trying to maximize its short-term profit margin.

Investors should only become worried about Spirit's growth rate if its operating margin falls significantly below its 15% target. With its operating margin currently above 20% -- and likely to remain there in 2016, thanks to low fuel prices -- Spirit Airlines should stick with its high-growth strategy.