Please ensure Javascript is enabled for purposes of website accessibility
Log In Help Join The Motley Fool
Free Article Join Over 1 Million Premium Members And Get More In-Depth Stock Guidance and Research
By Jason Hall - Jan 16, 2016 at 10:00AM

It could very well be the worst, but there's hope on the other side.

There are too many of these and not enough demand. That must change for Seadrill to have a great 2016. Image source: Seadrill.

Offshore drilling contractor Seadrill Ltd. (SDRL) has seen its earnings drop sharply over the past year as the market for its services continues to deteriorate. And the company isn't alone, with fellow offshore drillers including Transocean Ltd. (RIG 1.72%) and Noble Corporation Ordinary Shares (NEBLQ) all feeling the pinch as long-term contracts expire with almost no demand from offshore oil producers to put vessels coming off contract back to work.

And while I think it's a foregone conclusion that Seadrill -- the business -- won't have its best year ever in 2016, there is a case to be made that Seadrill -- the stock -- could. But a lot of things have to go right for that to happen. Let's take a closer look at what Seadrill must do, and what else has to happen for this to be a great year for the company and its stock.

Cutting spending has helped
Over the past 18 months, the profits for Seadrill, as well as Transocean and Noble Corp. have fallen sharply: 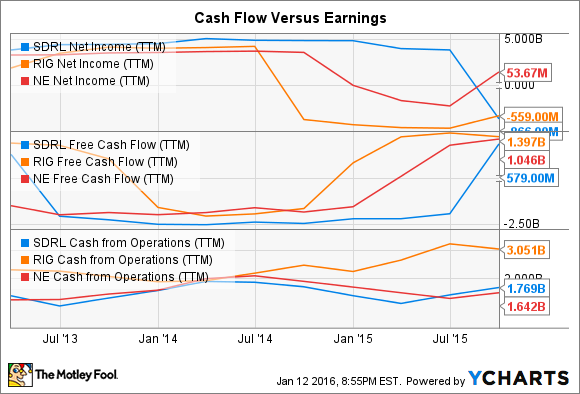 Yet even though net income has fallen, Seadrill and its peers have actually produced more free cash flows over the past year than they did before.

Cost cuts are only part of it
The spending cuts to newbuilds and the dividend have made a massive difference, but the company can only cut so far. At the end of Q3, Seadrill had nine of the 29 vessels it owns directly out of work, and 11 of the 54 total vessels it has an interest in were idle. At some point, it must either get those vessels operating under some sort of contract or consider stacking them in order to further reduce its operating expenses.

The problem is on track to only get worse. Seadrill and its subsidiaries have 14 more newbuilds on order, and eight of those are scheduled for delivery before the end of 2016. The good news is that Seadrill has already demonstrated the ability to work closely with shipyards to delay completion and delivery of vessels, and it's likely that the company will be able to further delay newbuilds for which it has no work lined up.

Seadrill has 11 currently operating fleet vessels idle as of Q3, another four with contracts set to expire in the first half of 2016, and several more that will expire in the second half of 2016. All in, the Seadrill group has somewhere around $5 billion in contracted revenue on its backlog for 2016, a relatively substantial sum of cash that does give some measure of predictability for the company, at least in coming quarters, but huge uncertainty for vessels coming off contract.

Will that be enough to see the company through 2016? Probably. But if the market doesn't start turning soon, there's not a lot of hope beyond that. In a worst-case scenario, Seadrill could end 2016 with 25 vessels idle and as much as $14 billion in debt.

Things that Seadrill doesn't control
Two things must change that Seadrill has no control over: oil prices and the global supply of drilling vessels.

There is a major glut of older vessels in operation that are becoming both uneconomical and incapable of operating in the kinds of conditions and drilling at the depths many new reserves require.

According to Seadrill, 44 floating drilling vessels have been scrapped over the past 14 months, and another 27 with contracts ending in the next nine months would be prime scrap candidates. The jack-up vessel market is even more oversupplied, with Seadrill estimating that about 25% of the current fleet is near or over 30 years old. About half of those vessels are currently idle, with another half coming off contract over the next year. Combined, that's about 130 jack-up vessels that Seadrill expects to be scrapped.

However, there is a roughly equal number of newbuilds in various stages. Frankly, Seadrill needs to see the majority of the older vessels get scrapped, and newbuilds brought to market gradually over years.

Just as importantly, oil prices must rebound. Most offshore oil won't get developed at even $50 per barrel. And until oil prices begin to rebound, oil companies aren't going to commit the big capital to develop those projects. And while oil prices will rebound -- nobody can afford for them not to -- the question is when and how much.

Bottom line: Flip a coin
If oil prices do rebound -- I think they will, but I thought that last year, too -- and the high level of scrapping Seadrill expects to take place actually happens, Seadrill's stock would likely finish 2016 up in a very, very big way from recent prices. But there's too much that has to happen that Seadrill doesn't control for me to be willing to bet on it. There's too much we can't know to reliably predict what happens.

And since risk is basically the sum of what we don't -- and often can't -- know, I'll err on the side of caution. Seadrill could have a huge bounce-back year, but it's too early to make that call yet.