Please ensure Javascript is enabled for purposes of website accessibility
Log In Help Join The Motley Fool
Free Article Join Over 1 Million Premium Members And Get More In-Depth Stock Guidance and Research
By Daniel Miller - Jan 17, 2016 at 9:00AM

Ford's Fusion has been critical in proving Detroit's second-largest automaker can design and produce a successful passenger car -- something that wasn't always true. Will the 2017 Fusion continue its run of success?

Ford Motor Company's (F -2.44%) Fusion has been a huge success on multiple levels. In terms of sales, the Fusion was the 12th best-selling vehicle in the U.S. last year, and when excluding SUVs and trucks, it was the sixth best-selling passenger car. Beyond its impressive sales figures, the Fusion did something arguably even more important: It proved to the world that a Detroit automaker could design a popular and competitive mid-size sedan again.

With the Media Days at the North American International Auto Show in Detroit finished, it's time for consumers to take a look at what the 2017 Fusion has in store, and why it matters.

Mid-cycle strategy
It wasn't long ago when automakers would merely tweak a couple of small things during a vehicle's mid-cycle refresh, which was generally three to four years after the vehicle's new design was unveiled. However, with competition heating up in the mid-size sedan segment, automakers can no longer do the bare minimum during mid-cycle refreshes because the risk of falling behind is too high. Take a competitor of Ford's, for an example.

"We invested three to four times more than we typically would invest" in a mid-cycle update for the two cars," says Pierre Loing, Nissan product-strategy chief, according to Automotive News. "The competition is getting stronger."

Because of mid-cycle refreshes becoming more extensive, many investors are looking to the 2017 Fusion for a big upgrade, and are hoping that Ford hits another home run, and secures near-term sales for its most popular sedan in the U.S. market.

Fusion Sport
While the exteriors of the Fusion models look mostly the same, there's little doubt that Ford put a lot of effort into making this collection the best yet. Perhaps the most intriguing is the Fusion V6 Sport, which boasts a twin-turbocharged 2.7-liter EcoBoost V6 engine. It's a very powerful performance sedan that stands out in a very competitive mid-size segment.

The 2017 Fusion will also have a Platinum trim after the model's Titanium trim sold very well for the folks at the Blue Oval. The Platinum trim will further close the gap between Ford's mainstream vehicles and a luxury vehicle.

The Fusion Platinum will be available with a 2.0-liter EcoBoost, as well as all-wheel drive, and the interior boasts of a hand-wrapped Venetian-leather steering wheel, a unique grille finished in Magnetic paint, and 19-inch polished wheels, among other features. Beyond the Fusion Sport and Platinum, the new Fusion Hybrid and Energi should continue to generate sales for America's best-selling lineup of plug-in hybrids with new software in both models.

The following graph tells a great story of how quickly the Fusion gained ground against the segment leader, Toyota's Camry. 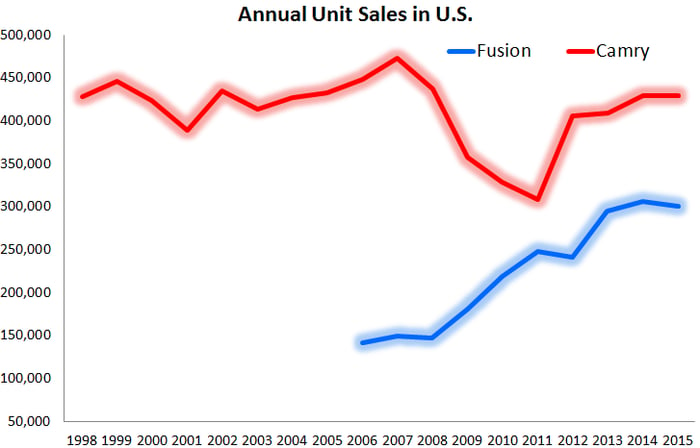 It's easy to see that the Fusion directly stole market share from the Camry, and it served Toyota a warning that it had to step its game up. And step its game up, it did: In 2011, Toyota redesigned the Camry, which provided a rebound in sales -- though, as you can see in the graph, those sales came at the expense of other competitors, rather than the Fusion.

Ultimately, while the exterior of the 2017 Fusion doesn't scream anything wildly different, the old adage proves true: If it ain't broke, don't fix it. And when consumers dig past the exterior, there's a lot to like about the 2017 Fusion, and investors should be optimistic that Ford's surge into the top-end of the mid-size sedan segment isn't going to be short-lived – and that's great news for Ford's market share and sales figures.