Please ensure Javascript is enabled for purposes of website accessibility
Log In Help Join The Motley Fool
Free Article Join Over 1 Million Premium Members And Get More In-Depth Stock Guidance and Research
By George Budwell - Jan 17, 2016 at 6:59AM

Obamacare has made a profound impact on the economy by creating huge demand for skilled workers in the high-paying healthcare sector.

When it comes to the Affordable Care Act of 2010, better known as Obamacare, it's safe to say that almost nothing has gone according to plan. Neither Obamacare's critics nor its supporters have accurately predicted how the law's implementation would play out in the real world.

Soon after Obamacare was signed into law, for instance, Republicans were quick to call it a "job killer.". According to the Bureau of Labor and Statistics, however, unemployment has been declining, and the number of new jobs created has been steadily rising, since 2010 -- implying that Obamacare has not been a detriment to the employment situation inside the United States.

One of the most profound, and perhaps surprising, ways Obamacare has made a positive impact on the economy is by driving up the demand for workers in the healthcare sector. In its latest jobs report, the Bureau of Labor and Statistics noted:

The underlying reason for this surge in employment in the healthcare sector is the upswing in the number of people that now have health insurance under Obamacare. According to a recent Gallup Poll, for instance, there has been a marked decline in the number of uninsured adults aged 18 or higher since Obamacare's implementation in 2013: 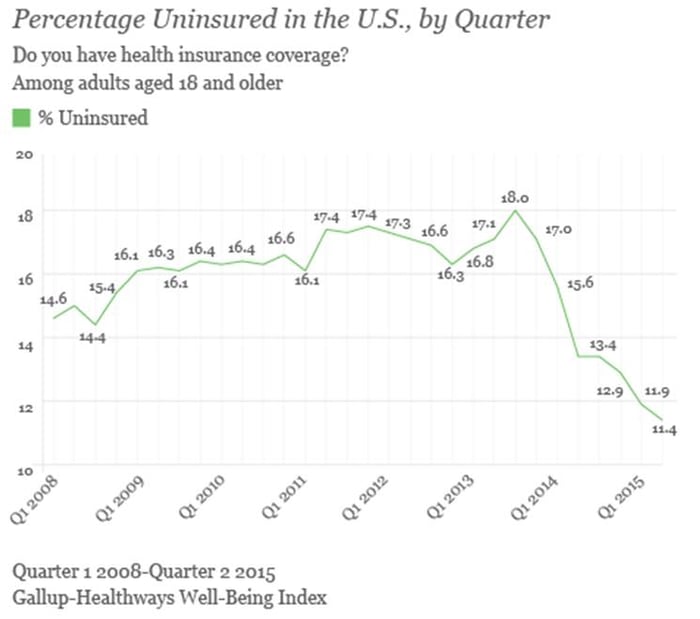 Hospital operators can't seem to meet the demand for skilled workers
The downside to this spike in employment in the healthcare field is that top hospital operators have struggled to control costs. HCA Holdings (HCA -0.60%), the largest hospital operator in the U.S., missed its third-quarter earnings in 2015, for instance, partly because of a hefty rise in its use of expensive contract laborers during the quarter.

Put simply, HCA and its peers have struggled to find enough skilled healthcare professionals such as nurses and EMTs to meet this staggering increase in patient volume. As a result, these companies have been forced to hire people through costly staffing service companies, often paying exceedingly high wages in the process.

On the flip side, this surge in demand for skilled healthcare workers is great news for folks looking to switch careers, or for those mulling over possible careers during their college years. After all, a governmental report on job growth issued last month predicted that medical assistants with a postsecondary degree could expect demand for their services to grow by a healthy 23.5% from 2014 to 2024. And nurses weren't far behind at 17.6%.

Foolish bottom line
Perhaps the key takeaway is that Obamacare needs to be fully implemented before attempting to draw any solid conclusions on its benefits or costs to the U.S. economy as a whole. Many hospital operators and their shareholders, for example, initially thought that Obamacare would be a boon to their industry. In short, hospital operators were hoping that their costs would plummet as fewer uninsured patients walked through their doors. However, the lack of enough skilled workers to service this increased volume has proved to be a major unforeseen cost on hospital operators such as HCA. At the same time, Obamacare has clearly created numerous high-paying jobs in the healthcare sector, and that's been to the benefit of the U.S. economy at large.