Fox introduced a dividend in 2013 but has only raised it once. Will it boost that payout again this year?

21st Century Fox (FOX) (FOXA) usually isn't considered an impressive income stock. Its current yield around 1.2% is much lower than the S&P 500's average yield of 2.3%, and many analysts believe that its bottom-line growth could be hurt by unstable box office returns and cord-cutting trends. However, let's take a deeper look at Fox's dividend and whether it could become more appealing this year. 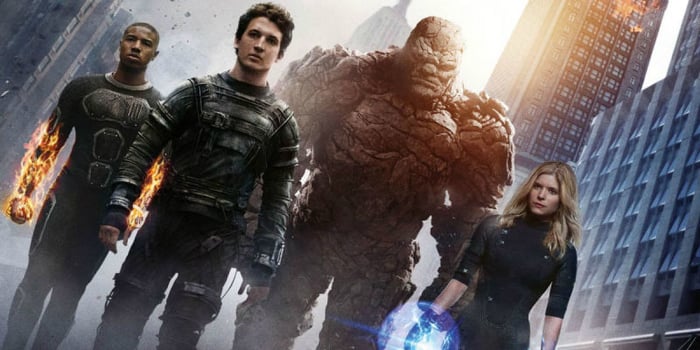 How Fox compares to its media peers
Fox's 1.2% yield is currently lower than Disney's (DIS 3.30%) 1.4% yield and Time Warner's (TWX) 2% yield. That's pretty disappointing relative to its price, since Fox shares fell 27% over the past 12 months and underperformed both rivals by a wide margin. But on the bright side, that decline reduces Fox's forward P/E to just 11, while Disney and Time Warner still respectively trade at 16 and 13 times earnings. 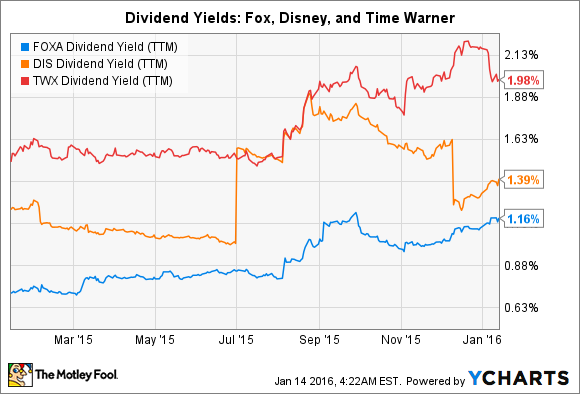 Over the past 12 months, Fox paid out 34% of its free cash flow as dividends, compared to 46% for Disney and 32% for Time Warner. This means that all three companies have plenty of room to raise their dividends. Over the past 12 months, the company spent $6.5 billion on buybacks compared to its free cash flow of $2.5 billion, indicating that it financed those repurchases with debt.

At the end of last year, Fox Executive co-Chairman Lachlan Keith Murdoch stated that by the end of fiscal 2016, Fox "will have returned in excess of $24 billion to shareholders through share repurchases and dividends over a five-year period," which "represents nearly 200% of free cash flow over that same period."

Prior dividend increases
Fox introduced its dividend in the second half of 2013 after splitting with News Corp. That quarterly payment of $0.13 per share remained the same throughout 2014 before being raised 15.4% to $0.15 in 2015.

Fox's single dividend hike is in-line with its industry peers. By comparison, Disney has paid dividends since 1987, and raised its semi-annual dividend 15% to $0.71 in December. Time Warner started paying dividends again in 2005 after a five-year break, and raised its quarterly dividend 9.4% to $0.35 last year.

Gauging the headwinds
However, dividends are meaningless without robust bottom-line growth. Analysts expect Fox to grow its annual earnings about 16% over the next five years, compared to a projected growth rate of 13% for Disney and 15% for Time Warner.

Looking ahead, Fox faces tough competition from Disney and Time Warner's growth in films and TV shows. Disney's upcoming theatrical slate is packed with Star Wars, Marvel, and Pixar films -- all of which can cast a halo effect across its theme park and consumer goods businesses. On TV, Disney's ESPN remains the most popular sports network in the world. Meanwhile, Time Warner has secured a new Harry Potter trilogy, is on the verge of creating a unified film universe for its DC comic book characters, and continues to dominate cable TV with Game of Thrones.

Last quarter, Fox's film revenue plunged 28% annually to $1.8 billion due to unfavorable comparisons to the prior-year quarter and the dismal box office performance of The Fantastic Four. But looking ahead, new X-Men, Independence Day, Maze Runner, Kung Fu Panda, and Ice Age films will all be likely winners at the box office.

On TV, Fox's FX cable network has gained critical acclaim with hit shows like Fargo, while Fox Sports continues to challenge ESPN worldwide. Revenues at the cable business rose 7.2% to $3.5 billion, but revenues at its basic TV networks remained flat at $1.05 billion. Operating income before depreciation and amortization at both the cable and TV segments surged by double-digits, but plunged 67% in the film segment due to its aforementioned problems.

Why Fox will likely raise its dividend in 2016
Fox's core business faces plenty of challenges, but its earnings are still expected to grow at double-digit rates over the next five years, and it pays out a conservative percentage of its free cash flow as dividends. Fox has also sold a lot of non-core businesses, like its pay-TV companies in Germany and Italy, to exit weaker markets and strengthen its bottom-line growth.

Based on these factors, investors should expect Fox to raise its dividend this year and for several years to come. However, its yield probably won't rise enough to satisfy income investors who are seeking beefier yields above 3%.