Please ensure Javascript is enabled for purposes of website accessibility
Log In Help Join The Motley Fool
Free Article Join Over 1 Million Premium Members And Get More In-Depth Stock Guidance and Research
By Daniel B. Kline - Jan 18, 2016 at 8:20PM

The company looks poised to have a big year, but there are a few things that could go wrong.

Charter Communications (CHTR 0.77%) will at some point in the coming year likely go from being just another minor cable and Internet company to becoming the clear No. 2 player in the space.

The company -- which has a deal in place to buy Time Warner Cable (NYSE: TWC) and Bright House -- will more than triple in size, assuming both deals close. That's a major one-year turnaround for a company which began 2015 watching Comcast (CMCSA -1.70%) be the one about to merge with TWC. Had that agreement not been killed by the Federal Communications Commission, Charter would have been forced to try to make numerous smaller deals in order to gain critical mass.

But the FCC put up roadblocks to the deal, and Time Warner Cable was put up for grabs again. Given a second chance to enter the big leagues and become Comcast's near equal, Charter wasted no time. All of this should set the company up for a record 2016, but investors shouldn't lose sight of what could go wrong. 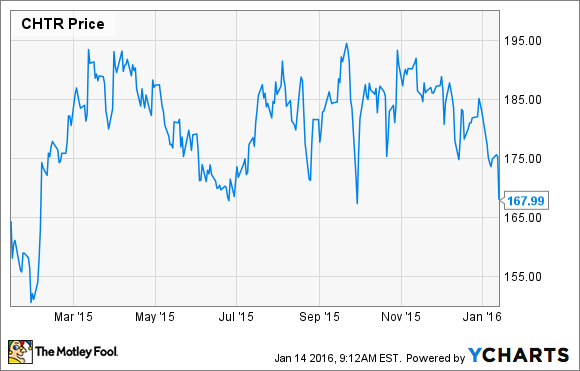 The FCC could say no
The reason the FCC stood in the way of the Comcast/Time Warner Cable deal is that it would have placed too much of the market under the control of one company. That's not the case with the Charter deal, as its purchase of TWC would create a clear No. 2 (really a co-leader) in the cable and Internet industries.

That's why the deal seems likely to avoid antitrust trouble, but there is no guarantee that the FCC will say yes. Under Chairman Tom Wheeler, the regulatory agency has often come down against consolidation. Wheeler, for example, has made it clear that he is against any deal that would shrink the wireless industry from four major players to three.

It's possible here that after a protracted review, the FCC may simply decide that creating new giants in the cable and Internet space does not benefit consumers. That outcome may not seem likely, but it's certainly possible.

The FCC could offer conditional approval
The FCC rarely comes down with an outright "no." Even in the case of Comcast's attempt to buy Time Warner Cable, the agency only made it known it was not likely to approve the deal. It never actually rejected it.

In some cases, like when Sirius and XM -- at the time, the only two U.S. satellite radio companies -- wanted to merge, the FCC imposed restrictions on price increases for a period of time. It's possible in this case that the federal agency will say yes to the deal, but also pile on conditions. It could force the new company to increase Internet speeds by a certain date, for example, or put pricing contingencies in place.

These types of conditions could cause Charter to back away, or they might simply make the post-merger company less profitable for a few years. Either one could drag the stock price down and be bad for investors.

Cord cutting could accelerate
Despite all the hype, cord cutting -- the practice of people abandoning cable for streaming services --  has really amounted to just a trickle, not the mass phenomenon many expected it to become. After losing 125,000 customers in 2014, the 13 major pay TV companies, which cover about 95% of the market, saw subscriber numbers drop another 650,000 through the first three quarters of 2015, according to Leichtman Research Group (LRG).

Assuming its acquisitions happen, Charter will have roughly 18 million cable customers. If the rate of cord cutting increases, that's a large customer base that could flee for cheaper streaming choices.

It's also possible that even a small uptick in cord cutting will force Comcast, Charter, and other cable companies to offer consumers cheaper "skinny"  bundles. That might keep their customer counts up, but it would come at the expense of profit margins.

Daniel Kline has no position in any stocks mentioned. The Motley Fool has no position in any of the stocks mentioned. Try any of our Foolish newsletter services free for 30 days. We Fools may not all hold the same opinions, but we all believe that considering a diverse range of insights makes us better investors. The Motley Fool has a disclosure policy.