Please ensure Javascript is enabled for purposes of website accessibility
Log In Help Join The Motley Fool
Free Article Join Over 1 Million Premium Members And Get More In-Depth Stock Guidance and Research
By Evan Niu, CFA - Jan 18, 2016 at 10:30AM

The famed auto veteran doesn't pull any punches with predicting Tesla's doom, but his criticisms might be misplaced.

Bob Lutz has a lifetime of experience in the auto industry. When he speaks, people listen. He's never been shy about his feelings about Tesla Motors (TSLA -0.84%), either. Just a few months ago, he penned an op-ed for Road and Track wondering, "Is Telsa Doomed?" It's hard to challenge an experienced veteran like Lutz, but Tesla also isn't your run-of-the-mill automaker. Since Tesla is also a disruptive technology company, the old rules might not apply in the same ways.

In the op-ed, Lutz points to what he calls "the trifecta of doom:" cash burn, securitized assets, and rising inventory levels. Let's look at each of his points.

Feel the cash burn
It's absolutely true that Tesla's cash burn is a risk factor for investors. But it's also true that auto manufacturing is one of the most capital-intensive industries on Earth, which is a major reason why there hasn't been a successful new auto entrant in nearly a century other than Tesla. The capital required to manufacture cars at scale is mind-boggling, and Tesla has rarely generated positive free cash flow. 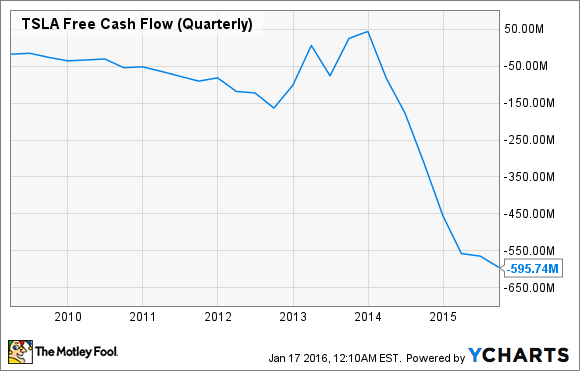 Investors appear to appreciate these capital requirements, and understand that the heightened capital spending is necessary for Tesla to grow. Despite the risks, investors accept the cash burns; Elon Musk already warned of "staggering" capital expenditures.

Furthermore, investors are happy to help Tesla with raising cash. Tesla conducted a secondary offering in August, raising $750 million to bolster its cash position. This offering was increased to satisfy investor demand, and shares even jumped on the news, a notable contrast to the typical market reaction to secondary offerings. Thanks to Tesla's soaring share price, dilution was minimal.

To be clear, investors won't always have patience for ongoing capital raises, but for now the public markets don't mind footing the bill.

Secured, schmecured
Tesla has another important source of cash: revolving credit agreements. This is where the "securitized assets" part of Lutz's argument comes in.

Last March, Tesla entered a revolving credit agreement secured by lease contracts and the related leased vehicles. Tesla can borrow up to $150 million through this agreement, and it had borrowed $124.4 million as of the end of September. It's a floating rate agreement, and Tesla pays LIBOR plus 165 basis points, so this isn't a cheap loan since that's kind of a wide spread.

In June, Tesla entered into another revolving credit agreement secured by accounts receivable, inventory, and other equipment. The total available credit for this line is $750 million, and Tesla had not utilized any of this credit line as of the end of September. It has a few options for the interest rate it pays based on market conditions.

Overall, Tesla has pledged or restricted $1.5 billion worth of assets to secure all asset-based agreements. But the risk of secured assets only materializes if the company comes under financial distress. To the extent that Lutz's first point about cash burn is contained as discussed above, the secured asset argument is arguably irrelevant.

The upside of rising inventory
Fundamentally, inventory risk is only a risk if a company is having trouble selling its products. Inventory that isn't moving will eventually need to be revalued and written down if it's just sitting on the shelf (or on the lot, in the case of a car). Tesla's inventory levels have been rising, jumping 35% through the first nine months of 2015:

Data source: 10-Q. Figures may not sum due to rounding.

The composition of this inventory is quite important. You can see that the vast majority of this increase is finished goods, which Tesla notes is "primarily due to customer orders that were in transit for delivery at quarter-end." Simply put, Tesla's "mounting inventory" is already bought and paid for, but is just on its way to its new home.

You may also note an increase in work in process, which suggests that Tesla is ramping up production. Considering the fact that demand remains robust (new Model S orders still take a couple months to deliver and Tesla has an estimated 30,000 Model X reservations), increasing production is actually a good thing, since that resultant finished goods inventory will promptly be converted into recognized revenue in short order.

Think different
I think Lutz was just making overgeneralized observations about Tesla, based on his considerable experience in the auto industry (not to mention his bias). None of this is to say that Tesla doesn't face considerable risks going forward. Quite the contrary -- I'm well aware of the risks. But when you try to apply Lutz's arguments to Tesla specifically, they don't hold up all that well.