Long-term investors shouldn't focus on geopolitical risks, but the fact that market share gains may be around the corner.

Here's why Yandex stock could have a much better-than-expected year ahead. Image source: Adam Baker via Flickr.

As far as headlines go, it hasn't been a good run lately for investors who've bet on the Russian economy. Between record-low oil prices, civil and military unrest in neighboring Ukraine, and constant threats from Russian leader Vladimir Putin, the average Joe sitting at home in America has more than enough reason to shy away from such a volatile situation.

While I concede that these aren't small concerns, however, I think that the combination of factors have made Yandex (YNDX -6.79%) a good bet at today's prices. In fact, I think it's possible that the company could have a better-than-expected 2016 when all is said and done. 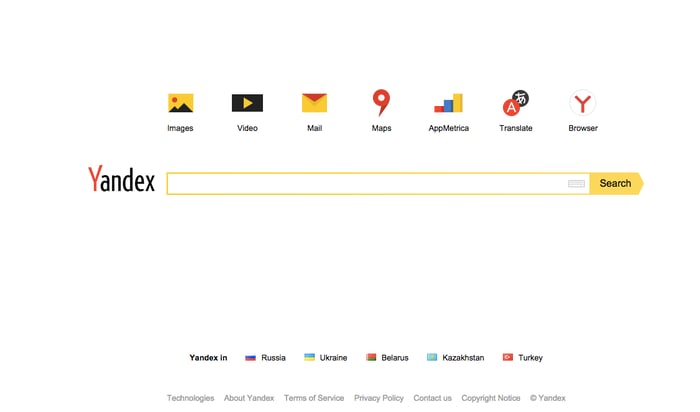 Against the backdrop of a falling ruble and GDP that has shrunk over 4% during the second and third quarters of 2015, Yandex -- the company -- has performed exceptionally well. The same cannot be said for Yandex stock, which is down 70% from the highs it reached in early 2014.

As you can see, while revenue decelerated throughout 2014, it actually accelerated as the Russian economy began to stall. That's no small feat. In fact, during the first nine months of 2015, Yandex was able to grow text-based advertising by 15%. For context, this revenue stream accounts for 92% of the company's top line.

Russian businesses are increasingly signing up to have Yandex help them reach potential customers online. The number of companies advertising via Yandex grew an impressive 18% to 354,000 in all. Perhaps, in the midst of a budget crunch, Russian companies now see the cost effectiveness of Internet advertising.

In this light, the swoon of the Russian economy could actually be seen as a long-term benefit for Yandex -- as more and more companies reevaluate their advertising spend.

The biggest threat isn't geopolitical
Of course, over the long run, none of this will matter if Yandex isn't the dominant search engine in Russia. And in that realm, Yandex has been struggling against Alphabet's (GOOG 2.68%) (GOOGL 2.63%) Google. 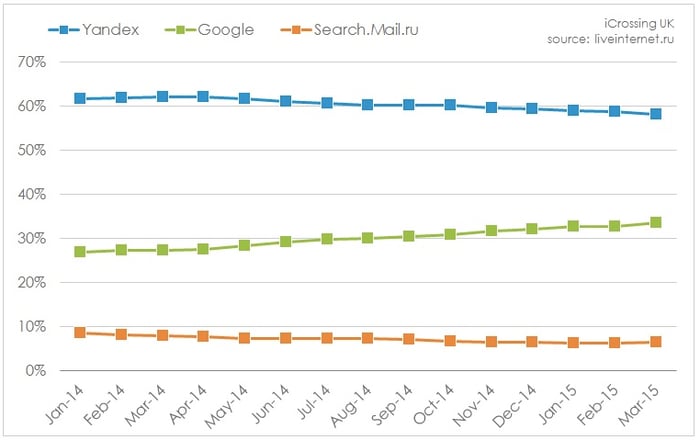 Whereas just two years ago Yandex had twice the search market share as Google, the company only owns 57%  of the Russian search market today. Google, on the other hand, has increased its share from 25% to nearly 35%.

But this is where the story gets interesting. Yandex contends that the reason Google has increased its market share is because Android phones -- which account for 80% of the smartphone market in Russia, according to Yandex -- are preloaded with the Google search app, while the same isn't the case for Yandex's app.

As a result, Yandex filed an antitrust suit against Google. The Russia courts upheld Yandex's claims. Google has since challenged the ruling; there's no known timeline for when the appeal will be decided.

But it is this -- the likely outcome of the appeal -- that could be a huge catalyst for Yandex stock. Investors are rightly worried about the world's largest and most powerful search engine taking over in Russia. But it's clear -- if you believe Yandex's narrative -- that Russian citizens prefer Yandex, and will continue to choose it over Google, so long as the app is equally accessible on their smartphones.

With Yandex showing surprising resilience in the face of this market share loss, it's exciting to guess about what the company could be capable of when (1) it regains lost market share, (2) the Russian economy improve, if only incrementally, and (3) the previous two factors start to drop all the way down to Yandex's bottom line.

As it is today, this founder-led company trades for just 22 times earnings. While that may seem expensive, it is heavily influenced by unfavorable currency exchange rates.

Put all the pieces together, I could easily see a scenario playing out that witnesses Yandex stock advancing significantly in the year ahead.