Please ensure Javascript is enabled for purposes of website accessibility
Log In Help Join The Motley Fool
Free Article Join Over 1 Million Premium Members And Get More In-Depth Stock Guidance and Research
By Leo Sun - Jan 18, 2016 at 7:40AM

Will this company’s paltry dividend yield improve this year?

Oracle (ORCL 2.58%) is often considered a slow-growth tech stock, but its 1.8% yield looks paltry compared with the dividends of other tech giants such as IBM (IBM 1.11%) and Microsoft (MSFT 1.70%). But because of the stock's 20% decline over the past 12 months, Oracle's yield has hit its highest level since it introduced a dividend in 2009. Looking ahead into 2016, should investors expect Oracle to raise its dividend to attract more income investors?

Payout ratios and dividend increases
Over the past 12 months, Oracle paid out 23% of its free cash flow as dividends. By comparison, IBM and Microsoft respectively paid out 35% and 43% of FCF as dividends. While that might seem as if Oracle is less generous than its peers, it also indicates that it has more room to raise its dividend. Oracle favors buybacks over dividends and spent over 90% of its FCF to repurchase shares over the past 12 months. 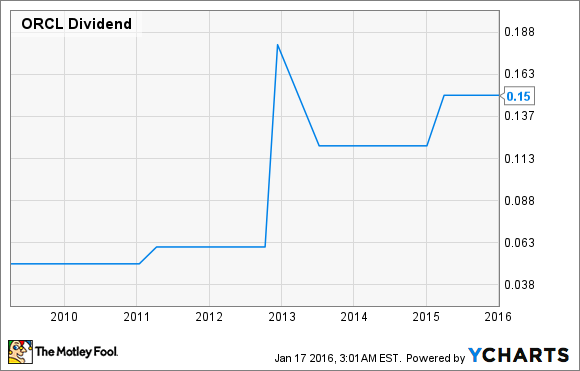 However, Oracle's dividend increases have been very inconsistent. At the end of 2012, Oracle paid three quarters of $0.06 dividends all at once, and then kept its dividend at $0.12 per share for seven quarters before raising it 25% to $0.15 last March. That dividend has remained at $0.15 for four quarters already, but it's unclear if Oracle will raise it again before calendar 2016 ends.

Within its on-premise business, software license sales fell 18% to $1.68 billion due to a shift toward cloud services. License update and support revenue, which feeds off license sales, slipped 2% to $4.68 billion. Within its cloud business, SaaS (software as a service) and PaaS (platform as a service) revenues rose 34% to $484 million, while IaaS (infrastructure as a service) revenue grew 7% to $165 million. Hardware sales fell 16% to $1.12 billion because of weak UNIX server sales and sluggish IT spending.

In the end, Oracle's cloud growth couldn't offset declines at its other businesses, and total sales fell 6.3% annually to $9 billion and missed estimates by $60 million. But looking ahead, Oracle expects to "sell and book" more than $1.5 billion in SaaS/PaaS business in fiscal 2016, which could reduce the weight of its legacy software and hardware businesses.

Oracle's non-GAAP net income fell 12% to $2.7 billion, its non-GAAP operating margin slipped from 46% a year earlier to 41%, and its FCF declined 22% to $11.3 billion. Non-GAAP gross margin for its SaaS/PaaS businesses also fell from 55% to 43%, but Oracle expects that figure to climb back to 60% as more billings convert to revenue.

Doubts about the cloud
If Oracle can keep transitioning to the cloud, its top- and bottom-line growth will probably stabilize. However, some analysts, including Morgan Stanley's Keith Weiss, are concerned that the company's IaaS business could have trouble competing with larger rivals such as Amazon.com's (AMZN 2.07%) AWS and Microsoft's Azure.

Considering how aggressively Amazon and Microsoft are pricing their cloud platforms, Oracle could be forced to lower its prices and sacrifice its margins to retain market share. If that happens, Oracle's turnaround plans could crumble and its stock could continue underperforming the broader market.

So will Oracle raise its dividend?
Oracle's preference for buybacks, its inconsistent dividend growth, and its sluggish bottom line growth all suggest that investors shouldn't hold their breath for a meaningful dividend hike in 2016. Oracle might raise its dividend in the second half of the year, but the yield will probably remain below 2%, so investors looking for a stable tech stock with big dividends should probably look elsewhere.