Please ensure Javascript is enabled for purposes of website accessibility
Log In Help Join The Motley Fool
Free Article Join Over 1 Million Premium Members And Get More In-Depth Stock Guidance and Research
By Leo Sun - Jan 19, 2016 at 9:45AM

Apple (AAPL -0.09%) might be interested in buying media giant Time Warner (TWX), according to a recent New York Post report. The Post claims that Apple is one of "a handful of companies" eyeing the company, which is reportedly under pressure from activist investors to either sell itself or spin off some assets.

After shedding about 16% of its market value over the past 12 months, Time Warner now has a market cap of around $56 billion. Apple finished last quarter with $205.7 billion in cash and equivalents, but only $21.1 billion of that hoard is in the United States. Instead of repatriating its overseas cash and being taxed, Apple would likely take on more debt (as it does for buybacks) or use its own stock to buy the company.

By buying Time Warner, Apple could revive its streaming TV plans, which were suspended last December. Time Warner's portfolio of films, HBO shows, and best-selling video games would diversify Apple's top line away from the iPhone, which generated over 60% of its sales last quarter. But despite those benefits, there are three big problems which will likely prevent Apple from buying Time Warner.

1. Mismatched margins
On the top line, Apple and Time Warner's growth looks comparable. Analysts expect Apple to grow its sales 1.9% annually this fiscal year and 5.8% next year. They expect Time Warner to post 4.5% sales growth this year and 4.9% growth next year. Based on their projected revenues for the year, Time Warner's business would generate 11% of the combined company's annual sales. 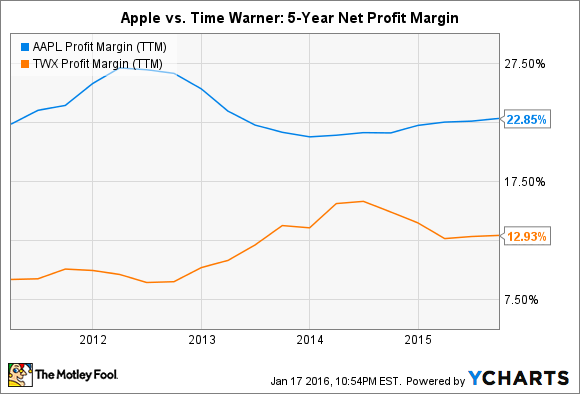 That streamlined relationship is ideal for Apple, but buying all of HBO and Time Warner's other cable networks isn't. Doing so would require Apple to deal with cord cutters, fickle advertisers, and relationships with pay TV providers. Buying Time Warner also wouldn't give Apple digital exclusivity to all of its content, due to existing agreements with other pay TV providers.

Last quarter, HBO's revenues grew 4.8% to $1.4 billion, but Turner's revenues fell 2% to $2.4 billion. To restore that balance, Apple would need to shift leading networks like CNN to digital platforms, eliminate weaker networks, and greenlight new shows. That could be far too much for Apple media chief Eddy Cue, who oversees services like iTunes and Apple Music, to handle.

3. Netflix would be a better fit
If Apple is willing to spend about $60 billion on Time Warner, it would make more sense to buy Netflix (NFLX -1.37%), which has a market cap of about $45 billion, instead. Netflix has a growing slate of well-received original programs like House of Cards, Orange is the New Black, Daredevil, and Jessica Jones. Its app has been widely distributed across all sorts of hardware, and cord cutters strengthen its business.

By buying Netflix instead of Time Warner, Apple wouldn't need to worry about advertisers or pay-TV providers. Furthermore, its iOS hardware and iTunes could give it the market clout to negotiate better terms with content providers than Netflix. While Apple wouldn't likely turn Netflix into an iOS exclusive service, it could offer iOS users early exclusive episodes of popular Netflix series.

However, this theory also has two big flaws -- Netflix has much lower margins than Time Warner, and it has a whopping P/E of 277. Time Warner is much cheaper at just 16 times earnings, which is significantly lower than the industry average P/E of 20 for the diversified entertainment industry. Time Warner is also expected to generate more than four times as much revenue as Netflix this fiscal year.

Apple shouldn't become a conglomerate
I seriously doubt that Apple will buy Time Warner, but stranger buyouts have happened before. If it does so to diversify its business away from the iPhone and expand its streaming TV efforts, it could be a costly mistake which could turn the company into a clumsy conglomerate and muddy up its long-term plans.

Leo Sun has no position in any stocks mentioned. The Motley Fool owns shares of and recommends Apple and Netflix. The Motley Fool recommends Time Warner. Try any of our Foolish newsletter services free for 30 days. We Fools may not all hold the same opinions, but we all believe that considering a diverse range of insights makes us better investors. The Motley Fool has a disclosure policy.