The last three years have been a great time to be a big beer investor. Growing profits and mega mergers have driven stocks like Molson Coors Brewing Company (TAP -1.42%) higher despite a lack of top-line growth from the big beer market. So, what could end this joy ride big beer has been on? Here are three things to watch in 2016. 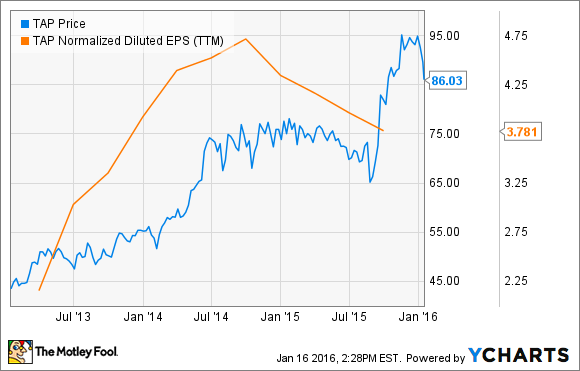 Craft beer continues to roll
The single biggest threat to the Coors and Miller family of beers is craft beer, which has steadily been taking market share for decades. According to the Brewers Association, in 2014, U.S. beer volume grew just 0.5%, but craft beer grew 17.6%. And on a dollar basis, craft beer grew 22% to $19.6 billion, or 19.3% of all beer sold.

MolsonCoors has tried to stem some of those losses by acquiring craft brands like Saint Archer, Leinenkugel's, and Crispin, but that strategy can only take you so far. Consumers are looking for interesting, local craft beer, and as soon as a brand is bought out by a major beer company, it loses some of that luster.

The slow decline of big beer doesn't mean Molson Coors stock is going to fall through the floor overnight. It just means growth will be hard to come by because small craft brewers are taking all of the new volume in the market today.

MillerCoors turns out to be expensive
When MolsonCoors agreed to buy the 58% of MillerCoors it didn't already own for $12.0 billion, it paid a pretty penny for the business, and that could turn out to be a mistake. Management said the purchase price for the enterprise was 11.5 times 2014 EBITDA, or 9.2 times EBITDA after considering tax benefits.

Above, I highlighted that MillerCoors brands aren't growing, and paying a double-digit multiple for the stake Molson Coors didn't already own is a lot. It may be the market price given the trailing earnings multiple of 38 on Molson Coors' shares, but it presents a big risk that shareholders are overpaying -- and could be left holding the bag if the business starts to decline.

The margin squeeze comes to an end
I highlighted above that big beer companies aren't growing much on the top line, but that doesn't mean they haven't grown profits over the past decade. The merger mania going on in beer right now is driven by companies' ability to negotiate lower prices for grains, hops, and even aluminum. They've also been leveraging advertising costs as bigger companies, which is a major expense in the world of big beer.

All of these cost savings have led to growing earnings even as revenue has stagnated. But there's a limit to how much cost you can squeeze out of the business. Molson Coors expects to get $200 million in annualized cost synergies from acquiring the remaining stake in MillerCoors, which shows an example of how companies are looking at scale as an advantage.

If margin expansion hits a wall, Molson Coors will need top-line growth to grow the business. But that doesn't look likely, and with shares trading at a high multiple, it could lead to a decline in shares long term.

Travis Hoium owns shares of Molson Coors Brewing Company. The Motley Fool has no position in any of the stocks mentioned. Try any of our Foolish newsletter services free for 30 days. We Fools may not all hold the same opinions, but we all believe that considering a diverse range of insights makes us better investors. The Motley Fool has a disclosure policy.