Investors beware: These beaten-down retail stocks could have further to fall in the year ahead.

Wal-Mart (NYSE: WMT) is an easy target when it comes to scary retail stocks. The big-box store plummeted 27% in the past year, and recently announced it would close 269 stores around the globe. Around 16,000 global Wal-Mart employees are set to lose their jobs as a result. Nevertheless, Wal-Mart isn't alone. Store closures and sinking stock prices have been a trend in the retail space lately.

To help you avoid the retail duds, three Motley Fool contributors outline below why Sears Holdings Corporation (SHLDQ), Etsy (ETSY 4.56%), and Best Buy (BBY -0.15%) are retail stocks to avoid at all costs in 2016.

Joe Tenebruso (Sears Holdings): As Amazon.com grows increasingly dominant in the retail arena, the e-commerce juggernaut is leaving a huge swath of carnage in its wake. Among the wreckage is Sears Holdings, the once-iconic American retailer that's steadily inching toward oblivion with each passing day.

The countryside is now littered with ghost stores -- formerly bustling Sears shopping centers that now lie vacant due to dwindling traffic and plummeting sales -- that serve as a sad reminder of the company's former glory and fading relevance.

Management has moved aggressively to stem the decline, first by closing hundreds of underperforming stores and then by selling off prized assets. But even after the sale of multiple subsidiaries and much of Sears' most valuable real estate, the capital raised from these transactions has only postponed Sears' passing, as the business continues to bleed cash.

Shoppers and investors alike are fleeing Sears, as evidenced by the precipitous declines in the company's same-store sales and stock price. 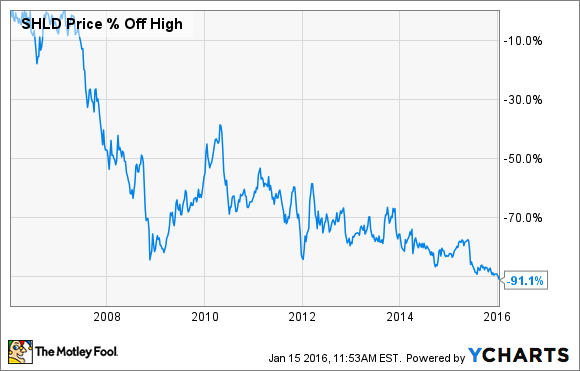 Yet even after a 90% decline in price over the last decade, little value remains in Sears Holdings' shares. And so, as consumers increasingly shun Sears' stores, investors should also stay well clear of the near-death retailer's stock.

Tamara Walsh (Etsy): Brooklyn-based Etsy is one of the worst-performing retail stocks on the market so far in 2016. The stock has nosedived nearly 15% year to date. It's been less than a year since the niche online retailer of handmade goods became a publicly traded company. Yet, Etsy is already trading below its initial public offering price. At around $6 a pop today, Etsy's stock is down a nail-biting 62% from its IPO price of $16 per share.

Wall Street blamed last week's decline in the stock on the expiration of Etsy's lock-up period. The lock-up on Etsy shares recently ended, at which point company insiders and senior management were entitled to sell as much as 21.9 million of outstanding shares. This temporarily depressed the stock as insiders took some cash off the table.

However, Etsy's problems run deeper than its recent lock-up expiration. Fresh competition from Amazon and rising costs are also weighing on the stock these days. The crafts marketplace has yet to turn a profit. Meanwhile, operating expenses increased 32% in its latest quarter to $43 million year over year. This could make it infinitely more difficult for Etsy to achieve profitability down the road.

Another thing keeping Etsy investors up at night: Handmade at Amazon, the e-commerce giant's direct competitor to Etsy that it launched in October. Ultimately, Amazon venturing into Etsy's territory could weigh on Etsy's already thin margins as it will likely be forced to increase advertising and marketing budgets to stave off competition from the online giant.

Bottom line: I'd avoid buying Etsy stock until it proves it can be a real competitor in the space.

Daniel B. Kline (Best Buy): CEO Hubert Joly deserves a lot of credit for the fact that his company still exists. When he took over in 2012, that future was very much in doubt as the chain faced declining sales mostly due to online competition. The once-mighty retailer had become used as a showroom before buying from a website.

Joly, to his credit, has reversed some of the declines while also cutting expenses. His efforts ensured that Best Buy will live to fight another day, but it does not change the chain's inherent problems. The retailer still has an outdated infrastructure built around huge retail stores. That gives it a higher cost structure than its online competition and the advantages of brick-and-mortar locations do not make up for that.

It's not that Best Buy and Joly are not to be commended for what has already been accomplished, but weak 2015 holiday sales show that cost-cutting and price matching will not be enough. The chain might have a future, but for that to happen, it still needs to go through a lot of pain. Joly needs to downsize stores, build a better online infrastructure, and continue to shed costs.

I believe that could happen because Joly has delivered so far, but as an investor, it's not a ride I want to go on. A smaller, leaner Best Buy may someday be a stock worth holding, but it's going to take a lot of pain, and probably some carefully managed losses, to get there.