Last week, MetLife (MET -0.10%) announced plans to sell its retail life insurance and annuity business in the U.S. The company has about $840 billion in assets today, of which up to $240 billion could be included in this sale.

That's a huge portion of the company's business; so why is it selling? It's selling because MetLife doesn't want to be considered systemically important anymore.

Systemically important designation
In response to the financial crisis, the Dodd-Frank legislation called for the creation of a group called the Financial Stability Oversight Council. Its responsibility is essentially to make sure that the financial system never experiences the systemic problems that brought it to near collapse in 2008 and 2009.

One of the cornerstone policies of the Financial Stability Oversight Committee is the designation of certain large and important financial institutions as systemically important. Systemically important financial institutions are required by regulation to carry higher levels of capital on their balance sheets than they otherwise would, in addition to generally increased regulatory scrutiny. That higher capital adds an extra buffer of protection in another crisis situation; but it also limits the company's ability to use leverage to boost earnings.

MetLife is not alone
Most of the companies designated SIFI, as they're known, are banks. MetLife was one of the few non-bank financial institutions designated, alongside competitors AIG (AIG 0.30%) and Prudential Financial (PRU -0.01%). Industrial giant General Electric (GE -0.49%) also made the list, thanks to its massive finance subsidiary, GE Capital. 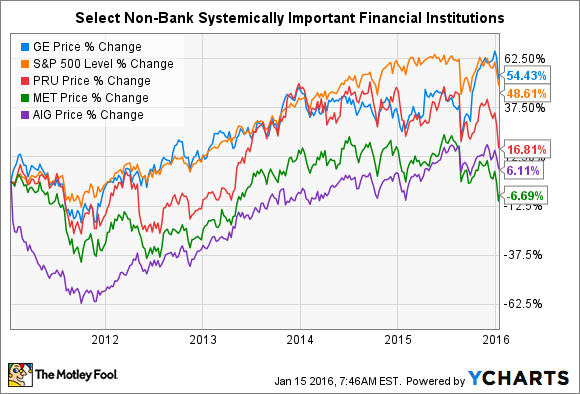 For the non-bank institutions, taking steps to remove the SIFI designation has become a major strategic priority to increase shareholder value. By spinning off, selling, or shutting down the parts of their businesses that drive the designation, the companies expect to increase earnings, compete better, and increase their share prices.

GE has taken the most dramatic steps to achieving this, announcing in April that the company would dismantle nearly all of GE Capital. Since then, GE has sold billions of dollars of assets, moving even faster than planned to shutter the division. GE's stock is up just less than 6% since the announcement, compared to a nearly 9% decline for the S&P 500.

MetLife initially attempted to escape the SIFI tag with a lawsuit against the U.S. government, challenging the Financial Stability Oversight Council's metrics and understanding of MetLife's business. That lawsuit is still ongoing after a year of legal maneuvering. While MetLife won't necessarily abandon the suit yet, this announcement does imply that the tactic isn't working as the company had initially hoped. To speed up the process to remove the SIFI tag, MetLife is now moving to shed assets, following the model set by GE.

Others have taken a wait-and-see approach. Prudential, for example, initially sought to appeal the designation through the standard SIFI annual review process, and then hoped to ride the wave of a MetLife court victory. Neither of these tactics have yielded results, though, and it's yet to be seen how the insurer will respond to MetLife's intention to now sell assets.

AIG, which received the largest bailout of any company during the financial crisis, has stated that it does not intend to challenge, or attempt to shed, its systemically important designation.

What happens next for MetLife?
As of now, MetLife has not said exactly how it plans to sell its retail life and annuity businesses. Most likely, the company will spin it off in an IPO, but management has said they are still exploring a few other options. It's unknown how this IPO would be structured for current shareholders, and how the market will value the new entity.

By selling assets instead of spinning them off, GE is able to use this new cash to fund a special dividend, as well as helping reshape its remaining industrial interests. Will MetLife's IPO tactic produce higher returns than an asset sale or private spinoff? That's yet to be seen.

For MetLife shareholders, there are still critical unknowns that will have a major impact on how the share price responds to the sale. As these details become known during the next few months, the market will gain a much-clearer view of MetLife's businesses going forward. This will be a story worth keeping a close eye on.

Jay Jenkins has no position in any stocks mentioned. The Motley Fool owns shares of General Electric Company. Try any of our Foolish newsletter services free for 30 days. We Fools may not all hold the same opinions, but we all believe that considering a diverse range of insights makes us better investors. The Motley Fool has a disclosure policy.