With so much of Microsoft's future dependent on the cloud, investors should keep a close eye on its commercial cloud annualized revenue run rate.

Given the size and scope of Microsoft's (MSFT -0.26%) businesses, the state of the company can't be embodied by any one particular number. Certainly, the number of machines running Windows 10 is relevant, as is Bing's share of the search market. The number of consumers subscribed to Office 365 and Xbox Live are both important figures, and so is the amount of Surface-related revenue Microsoft manages to generate.

But among the various numbers Microsoft regularly reports, one stands above the others: its commercial cloud annualized revenue run rate. Although it's an imperfect figure, it offers investors the best insight into Microsoft's ongoing transition.

Hypothetical annual revenue
Once, revenues at the Redmond tech giant were driven almost exclusively by the sale of software licenses (Windows and Office). But in today's mobile-centric and connected world, Microsoft increasingly depends on cloud services, including Office 365, Azure, and Dynamics CRM. With the importance of the Windows platform fading, and more computing being done online, many Microsoft investors are betting the company's future is tied to the cloud.

Hedge fund ValueAct bought nearly $2 billion worth of Microsoft shares in 2013 on the basis of its cloud businesses. "In three to five years ... we'll stop talking about PC cycles and instead talk about Microsoft as the largest cloud-computing company in the world," said ValueAct CEO Jeffrey Ubben (via Bloomberg).

Microsoft summarizes the success of its cloud business with its commercial cloud annualized run rate, a figure it has been regularly reporting -- and increasingly emphasizing -- since fiscal 2014. Essentially, the figure represents the amount of annual sales Microsoft's various enterprise-focused cloud services would collectively generate if current demand were sustained over the course of an entire year. It's a hypothetical, but it gives a sense of what Microsoft's annual cloud revenue could be.

Surging demand for Microsoft's cloud services
Microsoft's commercial cloud had an annualized revenue run rate of around $1 billion in the first quarter of its 2013 fiscal year. By the fourth quarter of that year, it had more than doubled, breaking above $2 billion. By the end of fiscal 2014, it had more than doubled again, and stood at $4.4 billion. 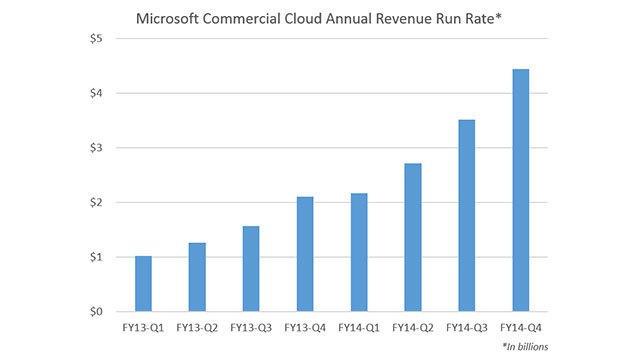 In the five quarters that have followed, it has nearly doubled a third time. Last quarter, Microsoft reported that its commercial cloud annualized revenue run rate exceeded $8.2 billion (up from $8 billion in the prior quarter). When Microsoft reports earnings Jan. 28,  it will likely report an even larger figure. In the long run, Microsoft's management is extremely optimistic. CEO Satya Nadella has repeatedly emphasized a $20 billion goal -- a number he hopes to hit by Microsoft's fiscal 2018. For comparison, Microsoft's entire business generated nearly $94 billion in fiscal  2015.

If Nadella continues to make progress toward that goal, the market may reward Microsoft investors. Since ValueAct disclosed its stake in Microsoft back in April 2013, Microsoft shares have risen about 65%, strongly outperforming the broader market. The rally may have been influenced by other factors, but Microsoft's surging commercial cloud annualized run rate may have played a large role. 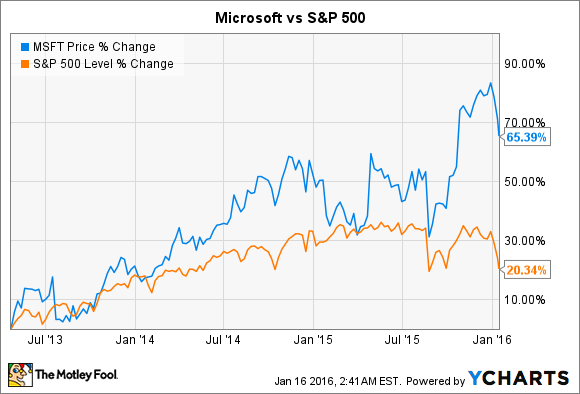 Of course, not everyone is happy with the metric. Last month, former Microsoft CEO Steve Ballmer criticized the figure, arguing that Microsoft should instead break out its actual commercial cloud revenue (and its margins) on a regular basis. Although Microsoft signs many of its customers to long-term contracts, the hypothetical nature of run rates is problematic. Actual quarterly revenue may provide a greater level of insight into the company's cloud businesses, but absent that, the run rate is the best metric Microsoft investors have.