Please ensure Javascript is enabled for purposes of website accessibility
Log In Help Join The Motley Fool
Free Article Join Over 1 Million Premium Members And Get More In-Depth Stock Guidance and Research
By Scott Levine - Jan 19, 2016 at 7:45AM

This leader in LEDs just reported. Let's bring the results into the light.

Energy efficiency is perhaps the most practical way to lower energy bills. In addition to turning the lights off, though, smart lighting products and solutions offer even more ways to enjoy savings. Shining bright in the LED and building automation systems industry, Acuity Brands (NYSE: AYI) recently released first-quarter earnings for 2016. Let's look to see if this smart-lighting specialist represents a smart investing opportunity.

Lighting the way
Although Acuity provides a range of energy-efficient products and services, LED lighting is the company's bread and butter, and it may continue to be so. According to Navigant Research, global revenue from LED lamps and modules, alone, is expected to total $216 billion from 2015 to 2024. During Q1, Acuity demonstrated its prowess in seizing some of this opportunity. LED-based products accounted for 52% of total net sales during Q1 and more than 40% growth year over year. Thanks in large part to LED-based products, the company reported record total net sales of $736.6 million -- growing 13.8% year over year.

Acuity must be cautious about relying too heavily on LED sales; this bright spot on the income statement can quickly burn out. General Electric (NYSE: GE), for example, is a formidable competitor in the space. In its third quarter, GE reported year-over-year revenue growth of 65% -- outpacing that of Acuity -- in its LED business.

With over 120 years of experience, GE is an imposing presence in the lighting market. Image source: GE.

More foreboding for Acuity, though, is GE's intention to center its new endeavor, Current, around its commercial-LED business. In fact, between $750 million and $1 billion of GE's commercial LED revenue will kick-start Current's operations.

Other shining spots
In addition to achieving record revenue, Acuity succeeded in cutting costs and improving profitability. Growing its adjusted gross margin by 120 basis points year over year to 43.4%, Acuity also grew its adjusted operating margin 110 basis points to 17.1% for the same period. The expanding margins translated to adjusted gross profit rising 17.2% year over year to $320 million; moreover, adjusted operating profit increased 21.4% to $125.9 million. Not only did Acuity achieve a company record for adjusted operating profit, but it also reported record quarterly diluted EPS of $1.57 -- a 34% increase over the $1.17 the company reported for the same period last year.

With 18 brands under the Acuity umbrella, the company is acutely focused on growing through acquisitions. Proving this again in early September, Acuity completed the $240 million acquisition of Distech Controls, a leader in building automation and energy management solutions. Acuity is keen on making acquisitions, but so are many other companies. The question then becomes: How meaningful are the acquisitions? Are they material to the company's success, or are they missteps from which the company must recover?

In reviewing Acuity's acquisition history, it appears that management has been successful. Since 2011, Acuity has completed eight acquisitions, and in that time, it has grown net income nearly 160% all without having to take on significant debt. In fact, it has successfully reduced its debt over the last five years. 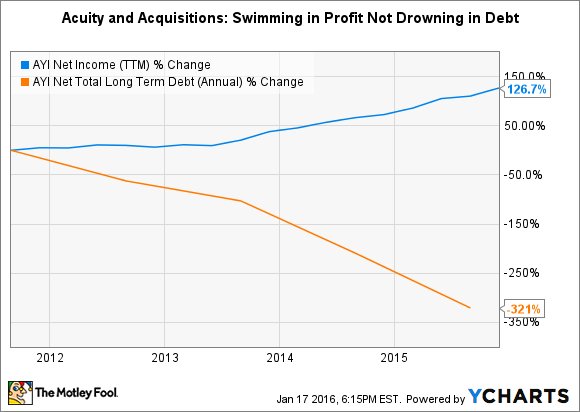 Shedding light on other opportunities
Connecting devices to each other -- without people getting in the way -- the Internet of Things is at the center of the smart building and smart city markets. It's the raison d'etre behind GE's Current, and the desire of numerous industrials and semiconductor companies. During Q1, Acuity announced an endeavor with smart city technology leader, Silver Spring Networks (NYSE: SSNI). The partnership is important as it broadens Acuity's exposure to the energy efficiency and IoT market. According to the press release, the two companies will "jointly develop an intelligent lighting platform for utilities, cities, and large campus operators." This, in turn, will allow operators to retrofit "aging lighting infrastructure and establish a path to additional smart city applications and services."

In addition to the deal with Silver Spring, Acuity expanded upon its building automation and energy efficiency offerings through its acquisition of Distech Controls. Commercial building automation is another market which is anticipated to experience rapid growth. According to Navigant, the market is expected to grow in global revenue from $58.0 billion in 2013 to $91.9 billion in 2023.

The takeaway
Acuity Brands had a respectable kick-off to fiscal 2016, but thanks to the market's whims and fancies, shares sold off nearly 4% following its earnings release -- though it exceeded earnings estimates, it missed on revenue, coming up $3.7 million shy of analysts' expectations. Regardless, the fundamentals seem strong. As it moves forward, look for the company to continue its string of acquisitions. Lacking a wide moat, acquisitions will neutralize smaller competitors and fortify itself against threats from larger companies.

Scott Levine has no position in any stocks mentioned. The Motley Fool owns shares of General Electric Company. Try any of our Foolish newsletter services free for 30 days. We Fools may not all hold the same opinions, but we all believe that considering a diverse range of insights makes us better investors. The Motley Fool has a disclosure policy.