Cablevision (NYSE: CVC) has always been a bit of an oddity among its cable and Internet rivals.

The company is a relatively small player, with under 3 million pay-television customers and a similar amount who buy broadband Internet, according to Leichtman Research Group (LRG). But because those users are concentrated in the tri-state area of New York, New Jersey, and Connecticut, it is often seen as a bigger player than it actually is.

Now, with the company having reached agreement to be acquired by French telecom giant Altice for $10 billion, or $39.40 a share, it looks as if it could become a major player. Including debt, the deal is for $17.7 billion. If the deal moves forward -- and that is not a certainty -- it could power the new Cablevision to its best year ever.

Cablevision has held its own
The biggest challenge for Cablevision has been competing in a space against much bigger competitors. It's not so much the traditional cable players that are its rivals, because those entities mostly stick to their own territories, but Cablevision does compete with Verizon (NYSE:VZ) and AT&T (NYSE:T). That competition should get more intense now that AT&T-owned DirecTV giving it more options to attract customers.

Even though it's dwarfed in cable subscribers by AT&T (about 26 million when you add in DirecTV), according to LRG and still much smaller than Verizon (5.8 million), Cablevision has remained a strong player. In Q3, the company saw revenue decrease slightly by 0.8%, but it also had its strongest third quarter when it came to adding customers since 2012.

But, despite these relatively strong results, Cablevision operates in a consolidating industry where bigger has generally proven to be better. The Altice deal, while it's not as straightforward a benefit as AT&T buying DirecTV, should give it more resources to compete.

It all hangs on the deal
If the deal passes than Cablevision, in becoming part of a bigger company, may have its best year ever. The problem is that the deal may not survive regulatory scrutiny.

Both New York City and New York state have expressed reservations about whether the deal benefits the public, The Wall Street Journal. This doubt has caused the spread between the company's share price and the acquisition price to grow. As of Jan. 18, when stock markets were closed because of the Martin Luther King Jr. Day holiday, it stood at $30.95, well below the $39.40 price Altice is paying. 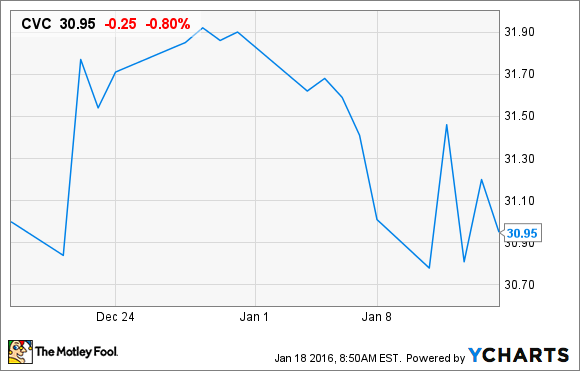 "The spread has widened in large part because people have become increasingly concerned that neither the city nor the state will find that the transaction is in the public interest, or alternatively, they'll demand so much in terms of givebacks that ultimately the deal won't be palatable to Altice," Craig Moffett, analyst at MoffettNathanson LLC, told the Journal.

The big concern, which New York Mayor Bill de Blasio's top legal counsel, Maya Wiley, shared with the paper, is that Altice has said the deal will result in $900 million in savings because of synergies and efficiencies.

"Altice is talking about $900 million in synergies. Well, what's getting cut?" Wiley asked. "How's that going to impact the economy of New York and quality of services? We certainly are not afraid to disapprove a transaction."

It will probably still pass
While both New York City and New York state will shake their sabers and demand certain concessions, it's hard to argue that the deal should not move forward. Cablevision is a small player competing against giants, and getting bigger will ultimately benefit the company.

The city and the state should make sure those benefits are extended to the cable and Internet companies' customers. But ultimately, after it gets some concessions from the new, larger company, the deal should proceed. It's not that Cablevision needs it to hold its own with AT&T and Verizon, but it certainly makes it easier and allows for more investment and innovation.

This will certainly be good for Cablevision shareholders, and ultimately it will make the company stronger. The cable and Internet industries simply require a level of investment that's easier to make when amortized over a larger company. Getting bigger is a key survival strategy in the current market, and should this deal pass, Cablevision will probably have its best year ever.