Cablevision (NYSE: CVC) has paid a dividend since August 2008, not missing a quarter in the years since.

In that time, the company's quarterly payouts have been modest, starting at $0.10, increasing to $0.125 paid in June 2010, then inching up to $0.15 in June, 2011 where it has stayed since then. That's a small return -- less than the $0.25 Comcast (NASDAQ: CMCSA) has paid in recent quarters -- but it's enough to keep the smaller cable and Internet provider's stock competitive.

Going forward, however, it's very likely that Cablevision as we know it will soon be no more. The company has accepted a buyout offer from French telecommunications company Altice. Under the terms of the deal, Cablevision shareholders would receive $34.90 in cash per share, valuing the company at around $10 billion. In addition, Altice would assume nearly $8 billion in debt, valuing the total deal at $17.7 billion, Reuters reported.

It's not a sure thing that federal, state, and perhaps even New York City regulators will allow the deal to go through, but for now, Cablevision will not only not be raising its dividend, it will be suspending it. 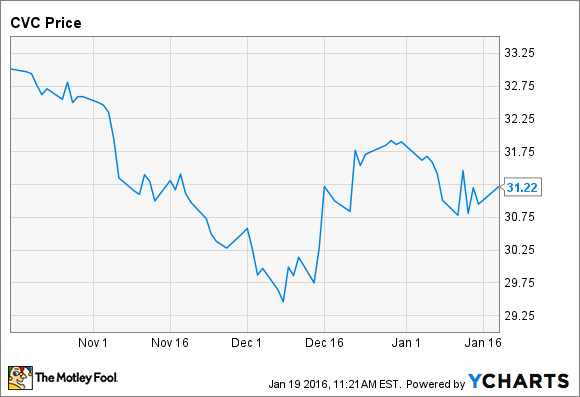 Cablevision is trading below the acquisition price. Source: YCharts.com.

What's happening to the dividend?
As a condition of the Altice deal, Cablevision has agreed to stop paying any dividends, the company said in a press release. The company's shareholders have already approved the deal and its conditions.

And, even if current Cablevision shareholders choose to reinvest the money they receive for the sale in Altice shares (the company trades on the Amsterdam exchange) it seems unlikely they will receive dividends, as the French company has a very clear policy against paying them, which it details on its website (link opens PDF).

Altice N.V. (the Company) has not paid any dividends since its incorporation and does not expect to pay dividends for the financial year 2015. In future years, the Company intends to assess the relevance of paying dividends in light of its strategy to prioritise value-enhancing acquisitions. Within this framework, the Company will at times consider returning capital to its shareholders through ordinary and exceptional dividend as well as share buy-backs if deemed adequate on the basis of its review of the opportunity set for acquisitions.

So, while Cablevision the stand-alone entity will be no more, the entity which is buying it did not pay a dividend last year nor has it ever paid one in its history. That makes it unlikely that during a time of investment and acquisition where Altice is taking on debt to do this deal that it would pay one anytime soon.

Will this make it hard to compete?
While Altice does not pay a dividend, the major and minor players in the U.S. cable and Internet service provider industries generally do. As noted above, Comcast has long paid a dividend and even Frontier Communications, a company similar in size to Cablevision's 3 million or so customers, pays one. But with Altice not trading on a U.S. exchange, its lack of a dividend won't matter since most American investors won't consider it for their portfolios.

The only way not having a dividend will impact Cablevision's acquirer is if it chooses to spin off its American holding on the NASDAQ or the New York Stock Exchange. If that happened and the company stuck to its no-dividend policy, its stock would have a strike against it that Comcast's and other cable leaders' do not.

But, assuming regulators approve this sale, it looks like Cablevision's dividend has ended and it's not coming back.