As the online retail juggernaut's fourth-quarter report looms, here's what it needs to deliver to keep investors happy.

From a long-term investor's standpoint, it seems short-sighted to point out Amazon.com (AMZN -1.20%) stock has pulled back to levels not seen since October. That was, after all, a mere three months ago -- and a drop in the bucket compared with the timeline for any investor who wisely subscribes to Amazon's long-term strategies for pursuing growth and steadily grabbing market share, even if it means forsaking bottom-line profits in the near term.

At the same time, it's hard to ignore the ferocity of the recent drop. Shares have fallen nearly 20% through the first three weeks of January as of this writing, underperforming even the S&P 500's steep 10.6% decline.

But investors should also keep in mind that Amazon stock is still up around 90% over the past year, spurred primarily by four consecutive stellar quarterly reports dating back to last year's Q4 release in late-January 2015: 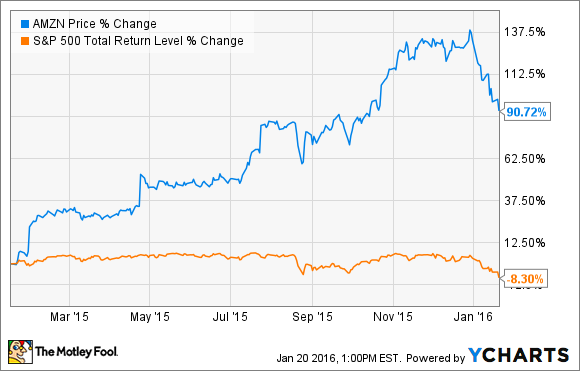 That raises the question: With Amazon's fourth-quarter 2015 results slated to be released next week, can Amazon turn in yet another impressive performance to both resume and extend its winning streak?

Lofty expectations
To be fair, I've already gone out on a limb to argue that, at least from a business perspective, 2016 will be Amazon's best year ever. But it's also safe to say the market is expecting as much; for the current crucial holiday quarter, for example, analysts' consensus estimates predict that Amazon's revenue will increase by a whopping 22.7% year over year to $36 billion, while earnings per share are expected to skyrocket more than 260% to $1.63.

The former sits near the high end of Amazon's guidance provided in October, which calls for revenue to grow between 14% and 25%, resulting in a range between $33.5 billion and $36.75 billion. And though Amazon didn't provide specific per-share earnings guidance, it did tell investors to expect operating income to arrive somewhere in a very wide range between $80 million and $1.28 billion, compared with $591 million in the same year-ago period. For perspective, that $591 million in operating income during last year's holiday quarter translated to net income of $214 million, or $0.45 per diluted share.

Signs of success
What we've heard on the top line so far is encouraging. Last month, Amazon revealed that this holiday has set new records for Amazon Prime, with more than 3 million new members joining the service in the third week of December alone. As a result, Amazon says it shipped over 200 million more items for free with Prime this holiday season than the last, including more than double the number of Amazon devices like its new Fire tablet, Amazon Echo, and Fire TV stick. Of course, that shouldn't be entirely surprising, as Amazon did tell investors during last quarter's report that it expected a "record holiday season," and for the majority of units shipped expected to come from Prime users. Altogether, the habits of these users should only add more fuel to the fire driving Amazon's ecosystem, in turn driving future growth of its retail and digital operations.

With that in mind, analysts' bottom-line estimates admittedly seem too optimistic at first glance. But even given the outsized influence of Amazon's low-margin retail operations in the holiday quarter, we should also remember this year Amazon has a highly profitable ace up its sleeve in the form of Amazon Web Services (AWS).

Last quarter, AWS revenue jumped 78.4% year over year to $2.09 billion. And though that only represented just over 8% of Amazon's total net sales, AWS managed to generate pleasantly surprising operating income of $521 million by itself, compared to operating income of $528 million for Amazon's much larger core North American segment, and an operating loss of $56 million from its young International business. Let it suffice to say, then, that in order for Amazon to once again surprise investors this quarter, it should hope Amazon Web Services can sustain both its torrid pace of growth and superior profitability.

For now, however, investors can only watch and wait until Amazon confirms whether its best-ever holiday season was enough to appease the market.

Steve Symington has no position in any stocks mentioned. The Motley Fool owns shares of and recommends Amazon.com. Try any of our Foolish newsletter services free for 30 days. We Fools may not all hold the same opinions, but we all believe that considering a diverse range of insights makes us better investors. The Motley Fool has a disclosure policy.