It's been a wild year for investors in Under Armour (NYSE:UAA). Its stock soared by 50% in the first half of 2015, only to give most of the gain back in the final three months of the year. What caused the rise and fall of Under Armour's stock? What's the outlook for the current year? And is Under Armour's stock a buy at its current price? 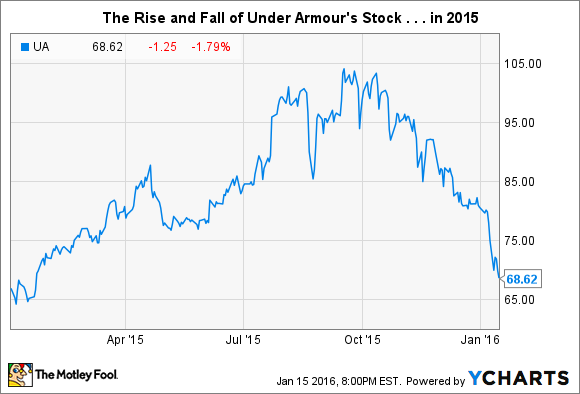 2015 in review
Under Armour had another year of strong growth. The company beat analyst earnings estimates in two quarters, and also put up double-digit revenue growth across the board. Here's a breakdown of those numbers:

2016 outlook
Analysts expect a repeat performance in 2016. Here's a breakdown of the next two quarters, as well as expectations for the 2016 fiscal year:

This outlook puts Under Armour's PEG ratio at 3.34 (dividing the forward price-to-earnings ratio of 76.77 by future growth expectations of 23%). Compare this figure with an average five-year earnings growth rate of 13% and a PEG ratio of 2.17 for the rest of the sports-apparel industry, including companies such as Nike and Adidas. In comparison with the rest of the athletic-wear industry, an investor in the company right now would be paying a premium for future growth expectations.

As with many high-growth companies, any misses in revenue or net earnings could mean a tumble in valuation. Perhaps this may explain the pullback Under Armour has experienced in the past few months, as investors dial down expectations in overall valuation and share price going forward.

Is the stock a buy?
It's obvious that people love Under Armour's products. The company, as well as investors, expect this to continue, which should boost its bottom line in the years ahead. I agree with this assessment , especially as the company starts to monetize its recent acquisitions and its foray into the wearable-electronics industry. With expectations far exceeding 20% a year in both revenue and earnings, even a quarterly miss in either category could still equal a big victory for investors over time. That said, Under Armour's current valuation still seems high to me, as measured by the forward P/E and PEG ratio compared with the competition.

To a new investor in the company, I would preach patience and caution, as the ups and downs could continue as Under Armour battles it out with the competition for a piece of athletic budgets.