Please ensure Javascript is enabled for purposes of website accessibility
Log In Help Join The Motley Fool
Free Article Join Over 1 Million Premium Members And Get More In-Depth Stock Guidance and Research
By Matthew DiLallo - Jan 20, 2016 at 9:15AM

According to the company's current projections, the answer is a resounding "yes."

Energy Transfer Equity (ET 1.57%) has grown its distribution for 13 straight quarters. It's a trend the company doesn't expect will end in 2016, with it projecting to grow its payout by a 21% compound annual rate from 2015 through 2017. Here's why the company expects to raise its payout in 2016. 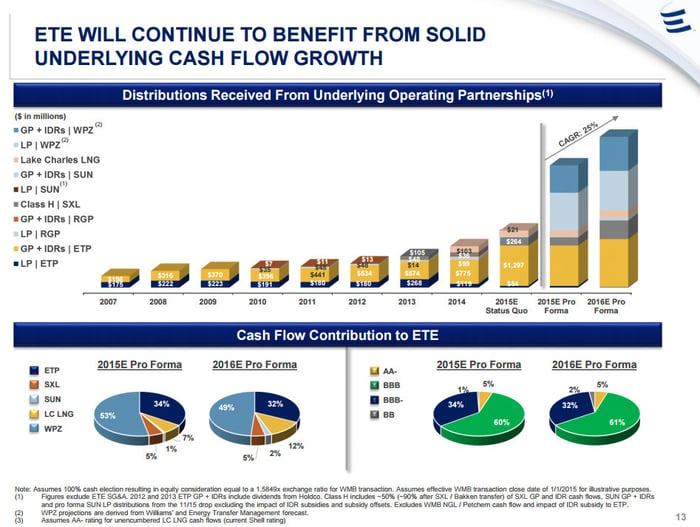 The addition of these income streams alone are expected to immediately boost Energy Transfer Equity's cash flow on a per unit basis. In other words, the Williams merger provides a foundation for dividend growth in 2016.

The income from those income streams will grow in 2016
On top of that, Energy Transfer Equity will also benefit from the overall growth of cash flowing out of its income streams in 2016. As this next slide notes, all three of its other MLPs are projected to grow their distributions strongly over the next two years: 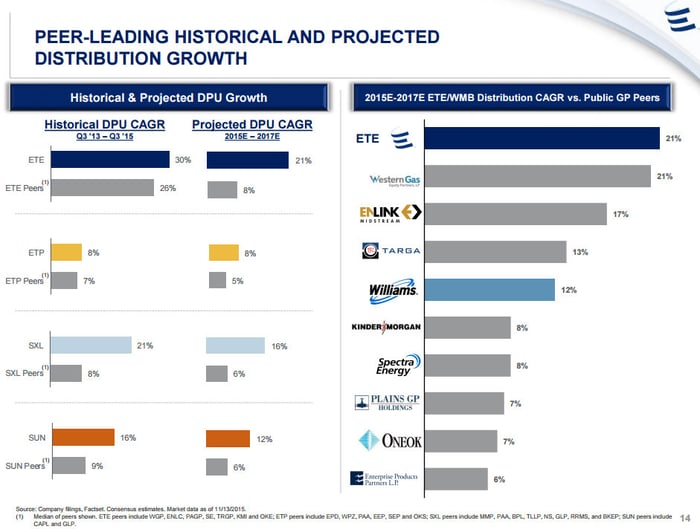 The other thing to keep in mind is that this growth is backed by new assets delivering more cash flow and not mere projections of what the company hopes to deliver. Sunoco LP, for example, recently acquired the fuel distribution and retail marketing assets of Energy Transfer Partners in a number of drop-down transactions last year. These assets provide Sunoco with more cash flow to grow its distribution. Meanwhile, Energy Transfer Partners is using the cash it received from Sunoco to help fund its $10 billion project backlog, which is expected to graduate a number of projects in 2016 including the Orla Plant, Bayou Bridge segment 1, and Lone Star Frac IV. Once these projects come online, they will drive strong cash flow growth for Energy Transfer, which should enable both entities to raise their distributions.

Investor takeaway
There's currently a lot of noise in the market that Energy Transfer Equity might need to reduce its distribution due to the current market turmoil. While that is always a possibility, that's not the company's current thinking. Instead, it's planning for robust distribution growth in 2016 because the number of its income streams will rise due to the addition of Williams while the amount of income flowing out of its income streams is expected to grow due to new assets coming online. That combination makes a distribution increase a pretty good bet.