Energy stocks, once viewed as extremely safe by investors, have had a rough time on the market in the past year. NRG Energy (NYSE: NRG) is one of the big losers in the independent power producer space, getting stuck between the old guard of fossil fuels and the new world of renewable energy.

However, the drop in NRG Energy's stock over the past year have left investors with a strong dividend yield of 5.5%. Is an even higher payout in store for 2016?

Operations aren't heading in the right direction
The biggest challenge for growing NRG Energy's dividend in 2016 is the fact that operations haven't been very strong. Margins in wholesale electricity have been weak, and the renewable energy business has generated losses for longer than management expected. 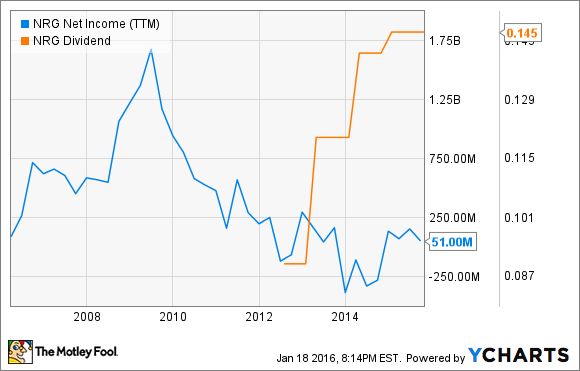 But I don't see operations improving in the near future, either. Wholesale prices are in limbo as wind and solar energy eat into the peak demand that used to be very high margin for NRG Energy. And the spinoff of the renewable energy business will leave a legacy business with little areas of growth. Management's own guidance said that adjusted EBITDA would drop from a range of $3.25 billion to $3.35 billion in 2015 to $3.0 billion to $3.2 billion in 2016.

If the business isn't spitting off cash, the company isn't going to increase its dividend.

The balance sheet is a mess
Operational weakness is a concern, but so is $19.9 billion of debt on the balance sheet. Debt and declining operations hamper the company's ability to grow, and it's debt investors are looking at as the biggest risk for the company going forward.

In the first three quarters of 2015, NRG Energy had interest expenses of $855 million, putting the company's run rate at over $1.1 billion. It's that massive debt load that probably puts the dividend at the most risk in 2016 because there's better things to do with cash than pay a dividend.

Better uses for cash than a dividend
If you were a highly indebted company with a deteriorating core business and few growth options, would you increase your dividend?

Given the upcoming spinoff of the green energy business, I think NRG Energy will spend most of 2016 trying to improve its core operations and reduce debt, or even buy back shares. That would make it a far less risky business and give time for investments made to upgrade its generation fleet to pay off. But in 2016, a dividend increase probably isn't in the cards for investors.