Management stands pat on guidance for the year, but are they being realistic? 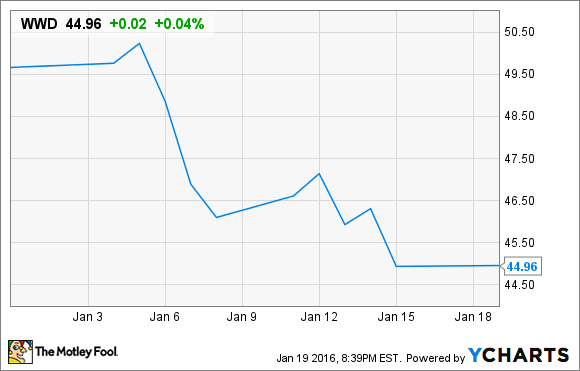 Fort Collins, Colorado-based Woodward makes energy control and optimization products for the aerospace, industrial, and energy markets. On Tuesday, the company reported its financial results for the first fiscal quarter of 2016. So how did it do?

Sales slumped 9% compared to last year's first quarter, coming in at $445 million and below Wall Street estimates. Free cash flow, as management calculated it, came in positive for the quarter ($4 million generated), reversing last year's cash-burning performance in Q1. Profits, on the other hand, although they apparently "beat" analysts' pro forma estimates, collapsed nearly 40% compared to last year when calculated according to generally accepted accounting principles.

Management blamed one-time restructuring costs "to consolidate facilities, reduce costs, and address current market conditions" for the decline, arguing that but for these charges, earnings would have been $0.56.

Nevertheless, the costs were incurred, and Woodward did not earn $0.56. So while management patted itself on the back with congratulatory words about "a solid first quarter" delivering results "in line with our expectations," investors can be forgiven for feeling a bit less than thrilled with the results.

What went wrong
Inarguably, Woodward's worst performance came in its industrial segment, which in most years is both Woodward's smaller business and its less profitable (according to data from S&P Capital IQ ). Sales there plunged 24% year over year. In contrast, the booming aerospace sector helped to lift Woodward's own aerospace revenues 5%, and boosted profit margins 220 basis points as well.

What will (hopefully) go right
Peering into the future, Woodward management saw no reason to change its guidance for the rest of this year, either up or down. After a weak Q1, management still believes it can turn things around later in the year, and emerge with sales growth of 1% or perhaps even 2% for full-year 2016. Despite the huge decline in profits last quarter, management promises to report earnings for the full year no less than the $2.75 it earned last year -- and possibly as high as $2.95.

Is that realistic? I don't want to sound pessimistic, but it's hard to see how even a modest improvement in sales will result in much improvement in profits this year. Revenues declined more than $40 million between last year's Q1 and this year's. At the same time, cost of goods sold declined barely $10 million, while selling, general, and administrative spending increased -- to little effect. The biggest source of spending cuts (aside from COGS) came in reductions to research and development -- the lifeblood of a growing company.

While I can't say for certain that management is wrong about the prospects for a turnaround, long story short... I'd still probably rather be short this stock than long.

Rich Smith does not own shares of, nor is he short, any company named above. You can find him on Motley Fool CAPS, publicly pontificating under the handle TMFDitty, where he's currently ranked No. 245 out of more than 75,000 rated members.