Please ensure Javascript is enabled for purposes of website accessibility
Log In Help Join The Motley Fool
Free Article Join Over 1 Million Premium Members And Get More In-Depth Stock Guidance and Research
By Matthew DiLallo, Tyler Crowe, and Jason Hall - Jan 21, 2016 at 8:00AM

Looking for growth and income? These three dividend stocks offer both in spades.

The market has been in a panic over the past few weeks, which is causing some stocks to sell off by ridiculous amounts. In particular, it has focused a lot of its selling pressure on dividend stocks because it's amplifying the short-term concerns by magnifying any problems. While many of the problems facing these companies are real -- and it's why some have already reduced their dividends -- that doesn't mean the market hasn't over-reacted. There are three dividend payers in particular that appear to have sold off well past a justifiable level, making each a strong bounce-back candidate in 2016.

Matt DiLallo: Over the past year, Kinder Morgan's (KMI 0.68%) stock is down nearly 70%. That's despite the fact that the company's primarily fee-based business model is expected to produce slightly more than $5 billion in cash flow in 2016, which is 8% higher than last year. Instead, what investors have reacted to are concerns surrounding the company's debt, which led to worries that its dividend would need to be reduced in order to address the issue. This became a self-fulfilling prophecy, because the company was left with no choice but to cut its dividend after the capital markets cut off its external funding options.

Having said all of that, Kinder Morgan has addressed this major concern. By significantly reducing its dividend, the company expects its leverage ratio to fall back to a more acceptable level by the end of 2016, with further improvements in future years. At some point, the market will realize that the company's balance sheet troubles are behind it, which would take some of the pressure off of its stock price.

In addition to that, there's a growing belief that the price of oil could rebound sharply in 2016. While the near term is decidedly bearish, with many believing oil has further to fall, a growing number of analysts and oil company executives expect a second half rally in the oil price, with some suggesting that a rebound above $60 a barrel isn't out of the question.

It's this combination of easing credit concerns with a sharp rally in the oil price that could catapult Kinder Morgan's stock back into the mid-$20s in short order.

Jason Hall: Over the past year, Textainer Group's (TGH 3.53%) stock has been battered and bloodied, with shares down nearly three-fourths as of this writing: 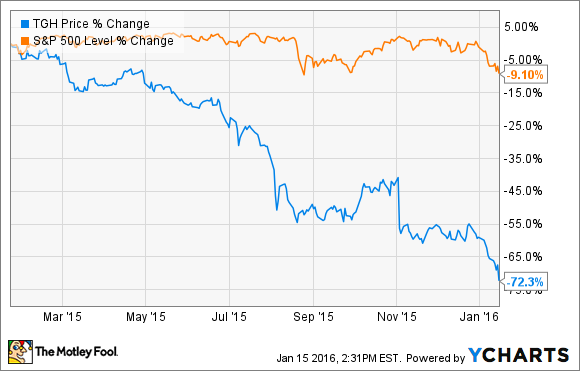 This has been the result of both a lot of competitive pressure, and serious concerns about the global economy, which Textainer relies on to support demand for the shipping containers it leases and rents to cargo shippers. Low interest rates and cheap material prices have led many container suppliers to ramp up inventories over the past few years, and Textainer has been one of the biggest buyers.

But while the debt binge did lead to big revenue growth and some profit growth, earnings have tanked recently: 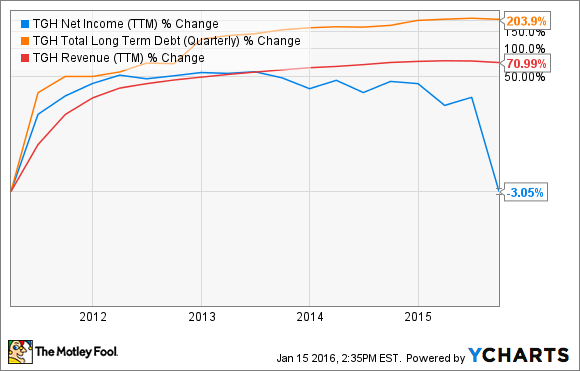 The company continues to face some very real challenges with macroeconomic concerns looming large, and interest rates set to rise. The funny thing is, those threats to the industry at large could very well come out in Textainer's favor.

To start, it's the gorilla in the industry, and Textainer should feel less impact from higher rates than smaller competitors, with a stronger balance sheet and lower leverage than its biggest competitors. Moreover, Textainer has 85% of its container fleet under long-term leases, with only 8% of that total set to expire in 2016.

Lastly, as CEO Phillip Brewer put it, the market seems to be valuing Textainer on the basis of current container prices, versus the cash flow the company will generate from them over their lives.

Between riding out the current volatility, the market's likely readjusting of its valuation of the business, and Textainer's overall strength, there's a very real chance this dividend stock -- currently yielding 10% in these fearful days -- will more than double in 2016.

Tyler Crowe: I can see why investors have sold off shares of Potash Corp. of Saskatchewan (POT) as much as they have over the past year or so, but that doesn't mean I agree with them. Over the past year, shares are down more than 50% as the prices for potash and other fertilizer products have declined. Today, the price for a metric ton of potash (the fertilizer) is below $300 per metric ton, a low we haven't seen since 2007. These low commodity prices can put a scare in any investor as profit margins have dried up for Potash Corp.

What so many investors seem to be missing, though, is that Potash Corp. has drastically brought down its capital spending as it has brought its new mines online.

With such large reductions in capital spending, the company estimates it can support its existing dividend even if prices for potash were to sink to as low as $200 per metric ton.

The market may be pricing Potash Corp for a dividend cut as prices for potash decline in the near term, but the company appears to have the low-cost operations and less need for capital spending right now to support the dividend at today's prices. Longer term, we can count on the need for more food and, hence, more fertilizers.

Once the market starts to realize these things, it's not too much of a stretch to envision shares of Potash Corp. doubling in 2016.