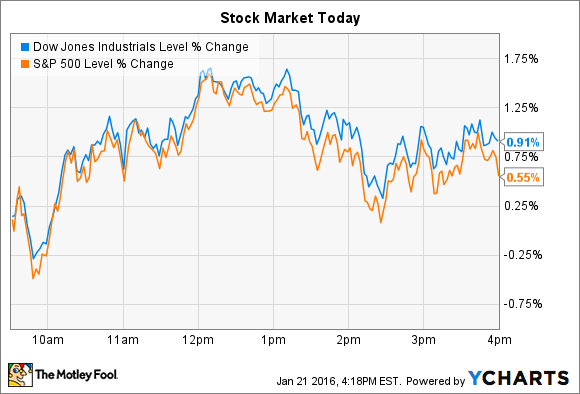 A big jump in oil prices made the energy sector today's leading performer after huge declines over the past three weeks. Meanwhile, fourth-quarter earnings results produced significant moves in some individual stocks today, including Verizon (VZ 0.83%) and Kinder Morgan (KMI 0.54%).

Verizon's improving profitability
Verizon was the Dow's best-performing stock today after its quarterly results beat expectations on both the top and bottom lines. The telecom giant posted a 3% revenue gain to $34.3 billion while analysts were targeting a smaller increase to $34.2 billion. Likewise, its $0.89-per-share adjusted profit was slightly ahead of consensus estimates that called for $0.88 per share.

The wireless business benefited from an increase in new subscribers and a decrease in churn, or the percentage of customers who cancel their subscriptions. Profitability jumped to 29% of sales from 24% as customers continue to upgrade to the latest smartphones, and to do so using installment payment plans. These pricing options grew to 67% of Verizon's wireless base, and the company expects that number to climb to 70% in the current quarter.

Management highlighted the fact that the telecom was able to produce hefty profits while still spending on its business and sending cash to shareholders. "Verizon delivered strong and balanced results in a dynamic competitive environment while returning more than $13.5 billion to shareholders," CEO Lowell McAdam said in a press release.

For the year ahead, the company affirmed its guidance that calls for 2016 earnings that are on par with last year's result. There are a lot of moving pieces within that expected flat result, though, including the sale of its wireline operations and the gain of new revenue from the acquired AOL and Millennial Media businesses. "Verizon embraced transformational change in 2015, and in 2016, the company has a huge opportunity to drive a new era of growth in our industry," McAdam said.

Still, oil price hedges helped shield the operations from the worst of the commodity slump. Earnings from Kinder Morgan's carbon dioxide segment, which is the segment most exposed to shifting oil prices, only fell 22%. Natural gas and product pipelines divisions contracted slightly, while the rest of its business stayed flat.

Management also detailed the financial implications of its recent decision to slash the dividend payout. The capital that difficult choice protected "insulates us from challenging capital markets and significantly enhances our credit profile," CEO Richard Kinder said. The company now won't need to take on any new debt this year, or for the foreseeable future beyond that, according to Kinder.

In the meantime, Kinder Morgan plans to focus on cutting costs and prioritizing those projects in its backlog that boast the highest return potential. "While the markets appear to have begun 2016 on the same sour note on which they left 2015, we are confident that we are one of the best positioned companies to withstand these headwinds," Kinder said.

Demitrios Kalogeropoulos has no position in any stocks mentioned. The Motley Fool owns shares of and recommends Kinder Morgan. The Motley Fool recommends Verizon Communications. Try any of our Foolish newsletter services free for 30 days. We Fools may not all hold the same opinions, but we all believe that considering a diverse range of insights makes us better investors. The Motley Fool has a disclosure policy.