2016's awful start has created a number of buying opportunities for patient investors. Among mega-cap stocks, Bank of America is one such opportunity.

Bank of America, the nation's second largest bank by total assets, has been savaged in this year's stock market rout, losing over $30 billion in market value since the start of the year.

The Charlotte, NC lender isn't alone in having suffered massive losses: On Jan. 15, Reuters BreakingViews pointed out that the top six banks had lost an aggregate $130 billion in the first two months of 2016. However, among the six, B of A arguably offers the most attractive combination of valuation, quality, and safety among the top banks.

The following graph shows B of A's stock price performance (blue line) beginning in the second half of 2013 compared to that of the Financials Select Sector SPDR Fund (XLF) and the S&P 500: 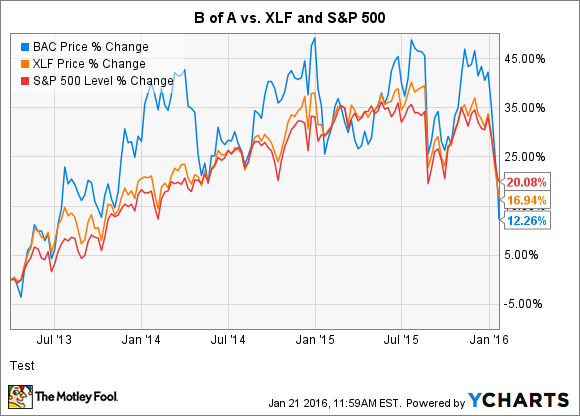 Note that B of A shares have outperformed both their peers' and the broader market during virtually the entire period, and often by a substantial margin (albeit with higher volatility, too). Over the past two-and-a-half years, this month is the only period of meaningful underperformance other than early 2015.

That strongly suggests to this columnist that the stock started out undervalued, at least on a relative basis.

While we remain concerned about Bank of America's relative medium-term revenue growth prospects, we believe the current share price more than reflects these concerns. Assuming our belief that a global recession does not loom in 2016 is accurate, we see significant upside to Bank of America shares from their current valuation.

But even if we were to assume that a global recession occurs in 2016, investors would then likely be hard-pressed to select mega-capitalization stocks that will perform well in the near term, and B of A's shares would still be well-positioned to outperform.

In any case, genuine investors have the wherewithal and temperament to look out further than the next 12, or even 18 months. On a three- to five-year time horizon and beyond, Bank of America's shares look likely to deliver very acceptable returns from current levels. B of A's slogan is "Life is better when you're connected"; it's time for value-driven investors to (re)connect with this bank's stock.

Alex Dumortier, CFA, has no position in any stocks mentioned. The Motley Fool recommends Bank of America. Try any of our Foolish newsletter services free for 30 days. We Fools may not all hold the same opinions, but we all believe that considering a diverse range of insights makes us better investors. The Motley Fool has a disclosure policy.