2015 was a fine year for McDonald's, judging by its stock appreciation. We look at what the company will need to achieve in 2016 to have its best year yet.

A few weeks into the new trading year, McDonald's Corp. (MCD 1.12%) continues to benefit from warm investor sentiment for its turnaround story. After 2015's phenomenal stock return of 30.4%, McDonald's has retraced just 2% so far year to date, versus a loss of 9% for the S&P 500 Index.

While it's improbable that the the international fast-food franchise can match its blazing prior-year stock performance, confirmation that it can increase its top line consistently could still make 2016 McDonald's best year yet, as this would signal a practically full restoration of investor confidence.

But to convince shareholders that revenue growth can be sustained, McDonald's will have to complete, in the least, the following three broad strategic tasks that management embarked on last year. At this point, McDonald's fixes aren't rocket science -- they're more burger science. That is to say, this part of the plan isn't about analysis, brainstorming, and problem solving -- it's about execution.

Task No. 1: Keep the brand-positioning initiatives rolling
By the end of next week, CEO Craig Easterbrook will have completed his first year at McDonald's helm. The company's latest chief executive has combined a push for incremental operational improvement with reinvigorated brand messaging that paints McDonald's as a company in transition. Add menu improvements to these two objectives and the incidence of new and repeat customer visits should increase in 2016: 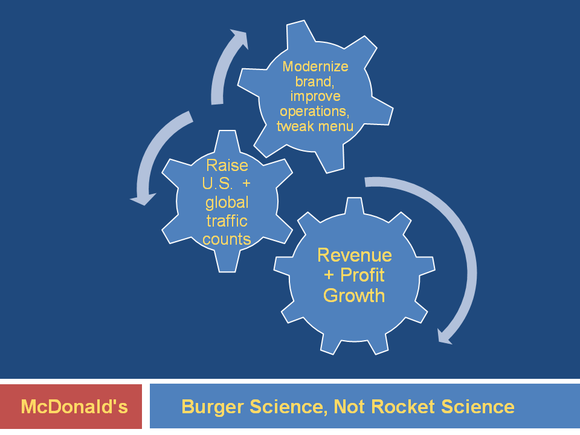 Easterbrook's brand proposition, which has become his signature catchphrase, is the remaking of McDonald's into a "modern, progressive burger company." Of course, having served as McDonald's chief brand officer prior to his appointment as CEO, Easterbrook understands that the messaging must reflect actual and significant change to be credible.

To this end, McDonald's has pushed forward a succession of product enhancements, the latest of which is the completely new packaging design rolled out this month. This aesthetic reset features brown paper bags and sandwich boxes free of McDonald's usual visual clutter, and relies heavily instead on bold and colorful typographical elements.

Maintaining a steady cadence of product messages surrounding these core concepts of "modern" and "progressive" should remain a near-term corporate prerogative. As clumsy as these two descriptors might be, after a year it's become apparent that McDonald's modernization is welcomed by existing core customers. That justifies and makes all the more desirable a contemporary, hipper outreach to Millennials -- the true target of the most visible modifications like packaging redesign.

Task No. 2: Maintain significant menu innovation
McDonald's introduction of all-day breakfast in the fall of last year, which followed a months-long pruning of low-profit menu items, proved management's resolve to shake up its product offerings in order to return to its traditional industry dominance. Also vital to McDonald's revenue recovery, but perhaps less noted, are recent successful LTOs, or limited time offerings. A prime example is the "Southern-Style Buttermilk Crispy Chicken Sandwich," a 2015 LTO that is making a positive impact on the brand and traffic.

New items are just part of the menu strategy. The company is examining and altering its current food sourcing structure, an area the management team has owned needs improvement. Easterbrook is an avowed admirer of Chipotle Mexican Grill (CMG 2.00%), which, despite recent crisis-level problems with its own supply chain, has led the fast-casual and quick-service sectors of the restaurant industry in the pursuit of sustainable sourcing.

The departures from long-standing sourcing practice Easterbrook has introduced, such as a gradual shift toward cage-free eggs and antibiotic-free chicken, are clearly intended to engage the type of customer Chipotle and similar chains have attracted. But within McDonald's monolithic supply chain (at least in North America), changes take years, not months. And given Chipotle's E. coli woes tied to the use of fresh ingredients, McDonald's is likely to proceed even more cautiously in this endeavor.

Moving slowly on sourcing shouldn't be a huge detriment. Like the brand changes discussed above, McDonald's needs not a super-fast, but a steady stream of menu and ingredient innovation to increase recurring visits from its traditional and newest customers.

Task No. 3: Give U.S. franchisees what they need to prosper
After McDonald's released third-quarter fiscal 2015 earnings in October, I discussed how important the U.S. business is to the entire enterprise. This is due to both its size (accounting for nearly 50% of global operating income in the first three quarters of 2015) and its homogeneity. The U.S. is a vast market, and while McDonald's four named geographical regions (West, Midwest, South, and Northeast) may be quite distinct from one another, they're nonetheless much more similar than regions within, say, Europe, which is fragmented across national borders.

It follows that U.S. franchisees are one of the most important stakeholder groups management should attend to. Unlike non-franchised Chipotle, which is currently undergoing its own mini-turnaround effort, McDonald's management can't simply choose the correct strategy and then stay the course within the confines of the executive suite.

Instead, it has to convince its franchisees that the net effect of current actions will eventually result in increased cash flow to owner-operators. Operating cash flow is a metric that both the moms and pops and larger franchise groups across the quick-service industry recognize as vital, regardless of the brand signage that graces their individual buildings.

The newest attempt to drive traffic in 2016, the "McPick 2" value menu, will succeed for franchisees if customers attach higher-ticket items to their orders after being lured in by the value offer. But management probably grasps that this is but one path to increasing franchisee cash flow. The best way to help U.S. operators prosper in 2016 is to continue to gain the small wins in branding and menu innovation, which we saw last year. Again, it comes down to a bit of burger science.

Asit Sharma has no position in any stocks mentioned. The Motley Fool owns shares of and recommends Chipotle Mexican Grill. Try any of our Foolish newsletter services free for 30 days. We Fools may not all hold the same opinions, but we all believe that considering a diverse range of insights makes us better investors. The Motley Fool has a disclosure policy.