The Mac maker's corporate finance team has its work cut out for it in the year ahead.

Over the past year, one recurring theme for Apple (AAPL 0.88%) and other major multinationals has been the impact of a strengthening dollar. The U.S. dollar continues to rise, putting pressure on international revenue for these companies. Since two-thirds of Apple's revenue is generated abroad, this is absolutely an important risk factor for investors to keep an eye on.

The Mac maker primarily uses foreign exchange derivatives to hedge its exposure, but at times it has been forced to raise prices when currency fluctuations prove to be greater than expected. This is particularly true for the Chinese yuan, since the U.S. dollar continues to rise against the yuan and Apple's "Greater China" segment is now 25% of total revenue on a trailing-12-month basis. 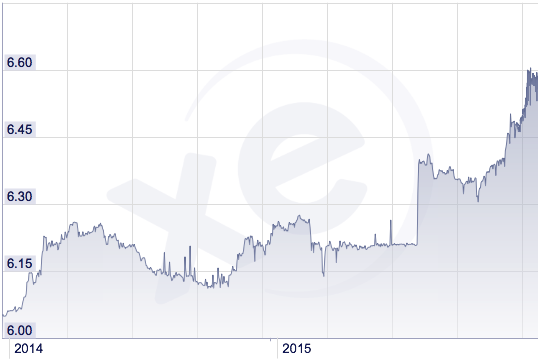 But Apple's hedges are only good for so long, since derivative contracts eventually expire and need to be replaced. Navigating foreign exchange risk is only going to get trickier from here on out.

Guidance is better than it looks
For example, Apple's guidance for the fourth quarter seemed a little soft because the growth forecast incorporated a foreign exchange hit of 7 percentage points. That's a massive hit when we're talking about a revenue base as large as Apple's. At the midpoint, revenue is "only" expected to rise by 2.5%, but on a constant currency basis Tim Cook said it would actually jump 8% to 11%.

When you acknowledge these foreign exchange headwinds, Apple's guidance actually looks that much more impressive, especially on the profitability side. The company expects gross margin to be 39% to 40%, even after taking a currency hit. I agree with CFO Luca Maestri calling the guidance "incredible" in light of these factors.

Party like it's 2016
Apple's currency hedges are typically in place for upwards of 12 months. So part of its derivatives portfolio will be rolling off this year. On the last conference call, Maestri noted, "That protection diminishes as we go through the year, and so we should expect that over time, during the course of fiscal 2016 that protection will come off assuming that the dollar stays at current levels."

In a recent research note, Morgan Stanley analyst Katy Huberty pointed out that Apple recognized $3.5 billion in gains from all of its hedges throughout fiscal 2015. This is the total that was reclassified from accumulated other comprehensive income into net income, net of tax expenses. That represented 5% of pre-tax profit.

Volatility = risk
The fundamental purpose of derivatives is to mitigate risk associated with volatility by transferring that risk. Forecasting is already hard enough, but increased volatility just makes it that much harder. So even as Apple continues to expand its hedging strategies, this task is only going to become more difficult, since currency volatility will likely continue to rise.

Global markets are freaking out largely because of China, and the yuan is expected to be volatile throughout 2016. That being said, China's central bank has said that it will try to mitigate and limit volatility in the yuan as best as it can, but the yuan still looks like it will remain weak this year.

Apple has a world-class (no pun intended) corporate finance team to navigate the tumultuous global financial markets, but it's not an easy job.