Freeport-McMoran (NYSE:FCX) continues to drop on the back of depressed energy  prices. Shares are down 80% over the last 12 months alone, with the decline in copper, gold, molybdenum, and oil being the main culprit for the precipitous drop in shares .

Freeport has already taken measures to combat the decline  in commodity prices by suspending its dividend, reducing capex, as well as possibly selling minority interests in various mining assets. These measures should help shore up the balance sheet and provide for much-needed liquidity. The recent resignation of James R. Moffett, chairman and co-founder, certainly didn't help stem the tide of uncertainty.

Barring any major turnaround in commodity prices, fundamentals are unlikely to improve in the coming quarters. Also, expectations for the upcoming quarter are unlikely to be significant or well received. However, it may be the time to start accumulating shares in Freeport, and here's why.

Global leader in copper mining
Freeport is the world's largest publicly traded copper producer. It has an industry-leading global portfolio of mineral assets and a substantial oil and gas reserve base that helps round out its portfolio. 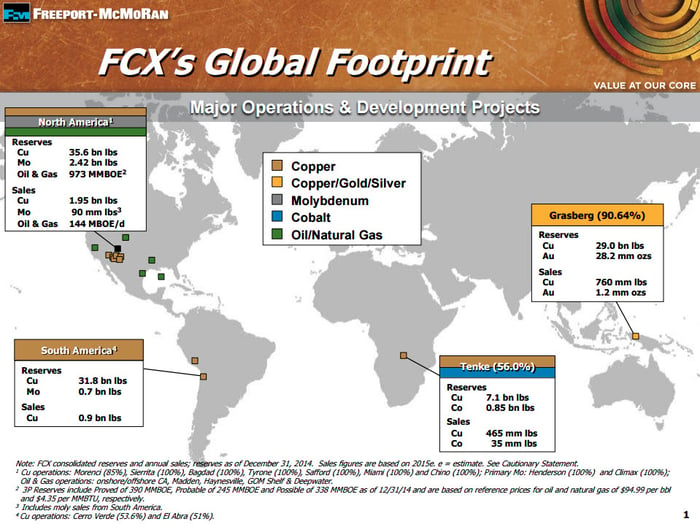 Freeport's high-potential exploration rights and vast industry experience through various commodity cycles give it an advantage over many in the industry.

Debt is excessive, but manageable
The company recently announced cuts to CapEx and deferred projects. Also, the company recently raised $2 billion from the sale of common stock. The company has a debt/EBITDA of 3.9 times, a strong liquidity position, and a declining Capex profile. 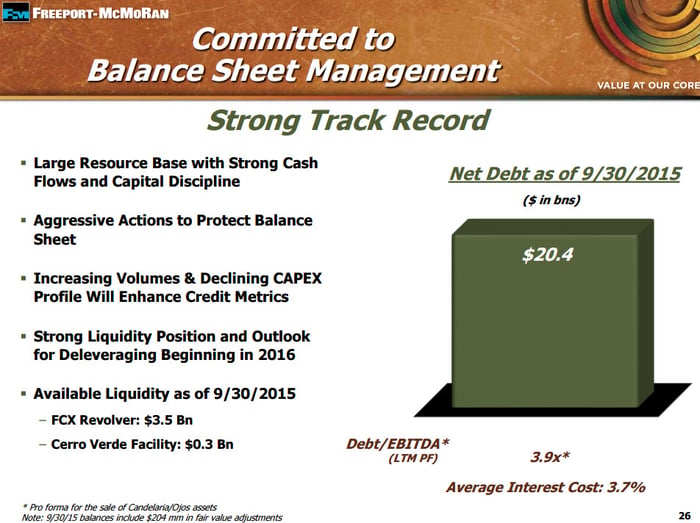 Another significant sign is the demand for copper assets in the market. Recently, Barrick Gold (NYSE:GOLD) sold a 50% stake in its jointly operated copper mine for $1.01 billion to pay down debt obligations. There was competitive bidding throughout the process among companies such as BHP Billiton (NYSE:BHP), China Molybdenum, and Antofagasta Plc, but Antofagasta ultimately won the bid with an all-cash offer.

On the asset side of the equation, the company has incredible assets that opportunistic competitors and P/E companies would love to own, including minority stakes in Tenke and Grasberg.

Numerous catalysts
Mounting debt, a drop in earnings, and the cancellation of its dividend have certainly helped pressure shares in Freeport. As we Fools know, the market is a discounting mechanism. These things are already known in the market. To gain an edge in the market, we need to ascertain divergences between perception and reality. In other words, what is the market missing? What are the potential catalysts that will help drive the business going forward?

I've been able to identify four main catalysts for increased stock prices that the market may be missing in this depressed commodity environment: (1) activist pressure on the company, (2) asset sales, (3) increased production with lower expenses, and (4) high copper prices. 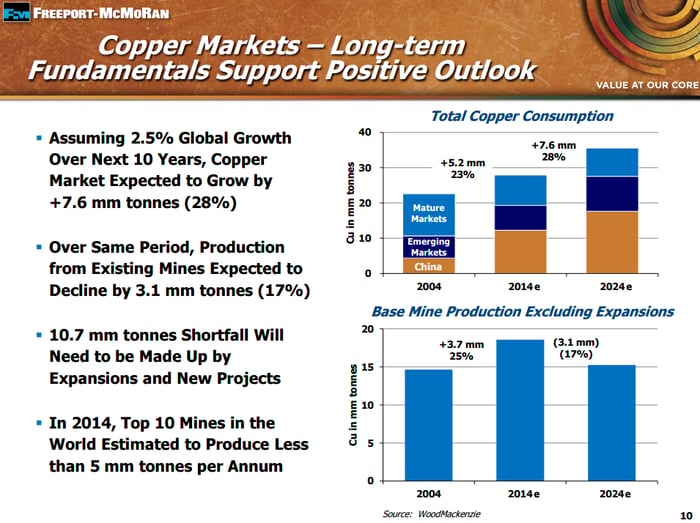 These catalysts lend support to stock prices long term and point out that the market may be missing the bigger picture. It's important to note that 154,731,000 shares are sold short, equating to 14.88% of the float. The significant short interest could lead to a big short covering rally given any good news or stabilization in commodity prices.

Extremely undervalued
Management has guided for roughly $2.8 billion in free cash in 2016 after the massive drop in CapEx, which would have shares trading at a P/FCF of less than 2 times at current levels based on the current market cap of $4.36 (enterprise value of $28.98 billion). If the company were able to generate this free cash flow number in the next 3 to 5 years, shares would be extremely undervalued at current levels. 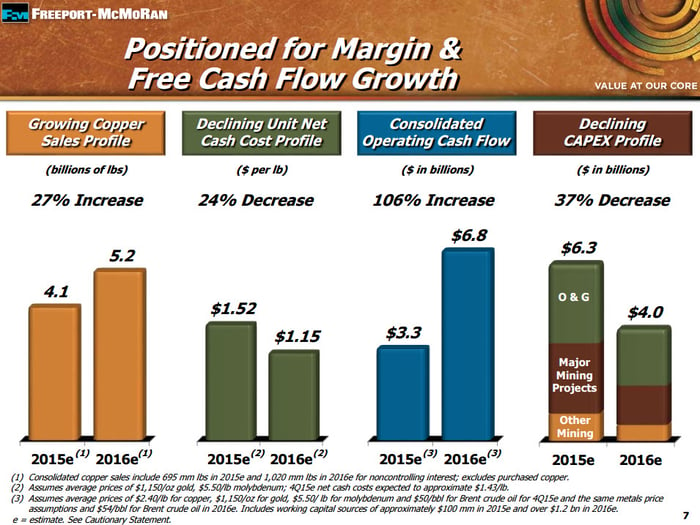 Also, the company is trading at 40% of its tangible book value. Using tangible book as a proxy for liquidation value, this is extremely undervalued.

Bottom line
The last time we saw Freeport trading at such a discount to its tangible book value was the depth of the financial crisis in 2008 and 2009. Granted, FCX is a very controversial stock right now. The stock price has been utterly obliterated. At this point, the question is, will they survive?

Even with all of the negativity surrounding the company, I believe the company will stay afloat and survive. It may not be in its current form, but I think it will survive. Ultimately, the survivability of the company comes down to free cash and the assets it can monetize through the sale of minority interests in various mining assets.

According to management, FCX should be able to generate $2.8 billion in FCF in 2016 with copper at $2.40/lb, gold at $1,150/oz, molybdenum at $5.50/lb, and $54/bbl for Brent crude. These numbers may be a little optimistic. However, they are reasonable levels when you look out 3 to 5 years, and beyond. The point is that they should be able to get back to free cash flow positive (or, at least, neutral) with the massive drop in CapEx in 2016 and 2017. If worse came to worst, Freeport should be able to sell assets to stave off disaster.

Shares look appealing at a price to free cash flow of less than 2 times (based on management projections in 2016-2017) and a price to tangible book value of 0.40.