Las Vegas Sands (NYSE:LVS) CEO Sheldon Adelson told reporters at a news conference last month that he believes Macau will stop spiraling down and begin growing again this year. Two weeks later the numbers were in, showing that December was the 19th month in a row that the company's total gaming revenue declined compared to the year-ago period.

"We are at the beginning of the shift in the cycle from a recession-type economy to a bottoming out, and I think the economy and Macau's fortunes will turn around," said Adelson.

Investors in Las Vegas Sands, Wynn Resorts (NASDAQ:WYNN) and Melco Crown (NASDAQ:MLCO) have been hearing this "turnaround" story for a long time now. How can Adelson be so optimistic when Macau's total gaming revenue dropped by roughly 30% last year compared to 2014? 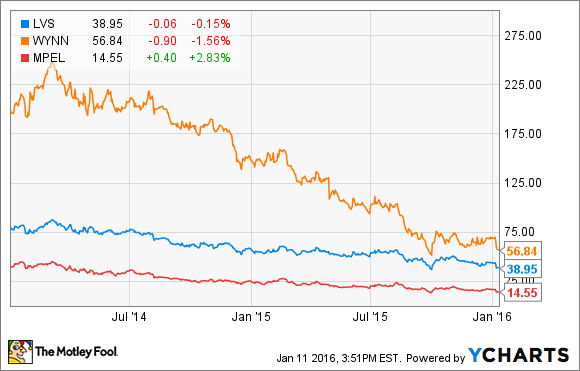 Is this the light at the end of the tunnel?
When the Chinese government decided in the summer of 2014 to restrict tourism to Macau, specifically targeted at high net worth players that constituted the bulk of Macau's economy, gaming stocks plummeted. Fast forward to the end of 2015, and the decline continued. The hardest hit, Wynn Resorts, has seen its stock drop by nearly 80% since June 2014.

The good news is that these month-to-month declines are starting to slow. Total sales in December fell by 21% compared to the year-ago period. That sounds bad, and it is, but it's a lot better than the 48% year-over-year drop reported last February.

Even more encouraging, month-over-month revenues have started to grow again. Total revenue in October 2015 was higher than September, and though it declined in November, it rose in December. All of this seems to suggest that there's a light at the end of the tunnel.

I know what you are thinking, but hear me out
A 21% year-over-year sales drop is nothing to celebrate. However, Macau's mass market tourism continues to thrive.

VIP gamblers made up the bulk of Macau's gaming economy over the last decade. This group includes wealthy business tycoons and government officials from mainland China. The Chinese government's 2014 policies targeted this segment of players specifically. The policies succeeded at curbing VIP gaming activity and thereby ignited Macau's ongoing travails.

Mass-market tourism, on the other hand, remains a great opportunity for Macau's casino operators. Many casino companies were already headed in this direction before the anti-VIP policies were put in place. Most casinos that have opened in the last few years have diversified away from VIP gambling with more non-gaming entertainment like shopping, dining, and live shows. This is similar to Las Vegas.

A new transportation option to Macau will help as well. Most people get to the island on a water ferry from Hong Kong, a one-hour ride that departs every 30 minutes or so. A bridge from Hong Kong to Macau is now under construction that will allow visitors to drive there.

A risky short term gamble, but long term opportunity
Macau's gaming industry may have turned the corner, but investors shouldn't expect it to eclipse its 2013 record of $45 billion in total revenue anytime soon. Plenty of challenges remain. A smoking ban inside Macau casinos could go into effect this year, and the Chinese economy's recent struggles could each weigh on Macau's gaming revenue. This could push gaming stocks even lower.

All of this sounds like a risky gamble in the short term, but Adelson's optimism comes from his long-term focus. He's saying there could be a turnaround in 2016, while simultaneously looking to diversify away from VIP gaming in favor of Macau's mass market. Since each of these casinos' stocks have been hammered over the last year and half, this could be an opportunity for long-term investors who are willing to wait out the short-term pain.