Please ensure Javascript is enabled for purposes of website accessibility
Log In Help Join The Motley Fool
Free Article Join Over 1 Million Premium Members And Get More In-Depth Stock Guidance and Research
By Travis Hoium - Jan 22, 2016 at 9:15AM

Earnings may not grow for this engine maker but its dividend could.

The economic uncertainty that's led to declining commodity prices should have both a positive and negative impact on Cummins (CMI 0.14%) operations, but lately investors have focused on the negative side, pushing shares lower.

On one hand, low energy prices should mean strong demand for transportation engines as more cheap goods are shipped around the world. On the other hand, a slowing energy sector has combined with slowing growth in China and Brazil to leave off highway and power generation markets weaker than investors had hoped. Will conditions improve enough to see an increased dividend in 2016?

The trends aren't positive today
Third-quarter results showed a 6% decline in revenue versus a year ago, 4% of which could be accounted for by the strong dollar. Management saw so much uncertainty in its off-highway and power generation markets that it decided to reduce its workforce by 2,000 in an effort to save $160 million to $200 million annually.

But within those numbers are some telling statistics. North American sales were up 4% while international sales declined 18%. This makes sense with weakening economies in Brazil and Asia combined with the strong dollar. But North America is very strong and that's where there could be upside in 2016.

Will engine sales pick up in 2016?
The strong dollar and low energy prices certainly have a negative impact on some parts of Cummins business. But they also should drive more U.S. imports and more attractive shipping volumes in the U.S. That could drive greater demand for on-highway engines, especially with emissions standards increasing in coming years.

The company has made a strong effort to increase international exposure, but 60% of sales still come from the U.S. and Canada so these are its most important markets. Given the economic tailwinds here, I wouldn't be surprised to see another uptick in North American performance in 2016. And that's the key to growing the dividend.

Plenty of cash for a dividend bump in 2016
While Cummins is fretting about the short-term drop in demand internationally and trying to lower costs to adjust, investors should take a longer-term view of the business. You can see below that over the past decade revenue and earnings have grown significantly and have been stable until quite recently. Earnings may drop slightly, but I don't see it collapsing given a strong U.S. economy. Analysts are currently expecting a 9% drop in EPS in 2016 to $8.19. 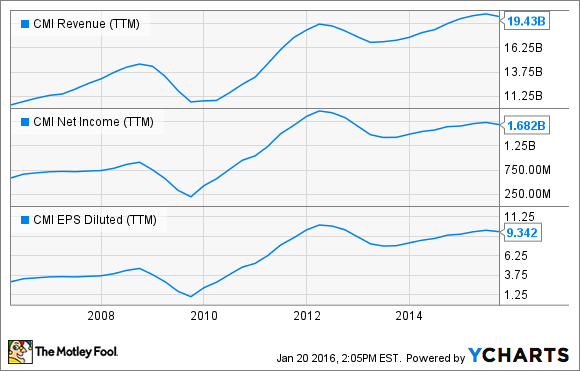 Even third-quarter earnings of $2.14 per share were more than double the $0.975 the company paid in a dividend. And management has a streak of increasing dividends to hold up as a sign of stability to investors. I think the manageable payout ratio and the dividend growth streak mean we can expect another increase in 2016. It may not be big, but the company isn't in as bad a position as recent share performance might indicate.

For investors looking for a solid dividend in 2016, Cummins may be a better option than you might think.

Travis Hoium has no position in any stocks mentioned. The Motley Fool owns shares of and recommends Cummins. Try any of our Foolish newsletter services free for 30 days. We Fools may not all hold the same opinions, but we all believe that considering a diverse range of insights makes us better investors. The Motley Fool has a disclosure policy.