Apple doesn't need stellar earnings and guidance to get the stock back on track.

Apple (AAPL 0.88%) finds itself in an unfamiliar position ahead of its fiscal first-quarter earnings report on Tuesday afternoon.

Typically, expectations are so high that if Apple meets (but doesn't beat) its guidance, investors are extremely disappointed. By contrast, its shares have fallen nearly 30% in the past six months and trade for less than 10 times forward earnings. This shows just how skeptical many investors are about Apple's near- and long-term prospects. 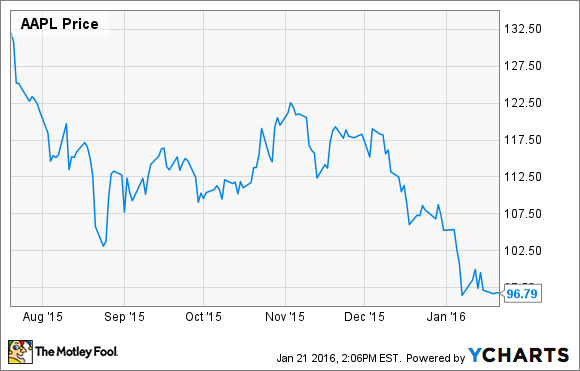 With expectations as low as they are, even merely "good" results and guidance from Apple could be great for its stock. Despite all the doom and gloom spread by Apple pundits, the company should be able to meet this low bar.

iPhone sales solid -- not spectacular
A series of recent guidance cuts by a wide range of Apple suppliers has led to some dire iPhone sales forecasts from Apple analysts. However, Apple CEO Tim Cook has repeatedly stressed that it's easy to misunderstand supply chain data.

In this case, while Apple does seem to be reducing its production plans, it's not clear from what level it is cutting production. For example, it could be that Apple over-ordered components ahead of the iPhone 6s launch to cope with a potential surge in demand and it is now expecting flattish sales.

That's a far cry from what many Apple analysts expect. In recent weeks, several analysts have projected that iPhone sales could be flat or down in the recently ended first quarter and could decline as much as 20% in Q2.

Usage data do imply that sales of Apple's flagship iPhones may be down by 20% or so in the U.S. and other developed markets compared to sales of the iPhone 6 and iPhone 6 Plus a year ago. However, there is growing evidence that these declines are being offset to some extent by higher sales of older iPhones.

Meanwhile, despite widespread worries about China's slowing economy, iPhones seem to be as popular as ever there. Earlier this month, analysts at Stifel estimated based on official Chinese government data that non-Android smartphone sales rose 33% (or 6 million units) year over year last quarter. The iPhone probably represents the vast majority of those sales.

Furthermore, top Chinese wireless carrier China Mobile (CHL) added a record 64.7 million 4G subscribers last quarter. The iPhone has always been a key part of China Mobile's strategy to move customers to pricier 4G data plans. China Mobile's 4G user base has grown along with the explosion in Apple's sales in China, so further increases there are a bullish sign for iPhone sales.

No reason for panic
Back in October, Apple projected that revenue would reach $75.5 billion-$77.5 billion in Q1. Analysts currently expect Apple's quarterly revenue to end up near the middle of that range.

However, since revising its guidance policy about three years ago, Apple's revenue has always beaten the midpoint of the guidance range. More often than not, Apple has even exceeded the high end of its guidance -- often by billions of dollars. This makes the current analyst consensus seem quite conservative.

It's not hard to imagine Apple beating its revenue guidance again when it reports earnings next week. The decline in flagship iPhone sales in the U.S. and other developed countries is likely to be fully offset by strong sales in China and higher sales of older models. Depending on how much Apple increased its channel inventory during the quarter, it likely sold 75-80 million iPhones.

Apple will probably project a revenue decline for Q2. However, as long as it posts revenue at or above the high end of its guidance for Q1, it can afford a modest revenue decline in Q2 while still posting first-half revenue that's at least as good as its record results from last year.