The tech titan showed that the end of the iPhone 6 cycle doesn't mean the end of growth.

During the past few months, many Apple ( AAPL -1.17% ) investors apparently panicked about everything from the slowing Chinese economy to smartphone market saturation to tough comparisons after Apple's record-setting 2015 fiscal year. The stock has been mired in a range roughly 10%-20% below its 52-week high for the past several months. 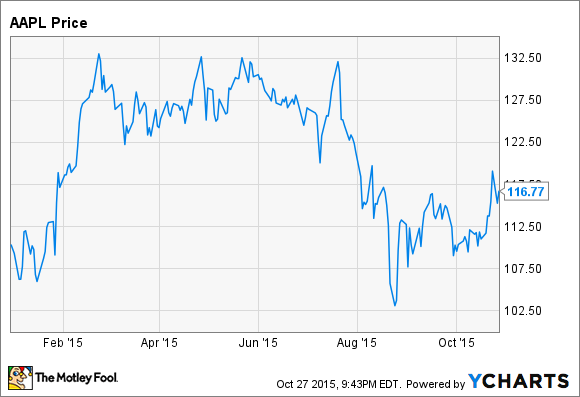 These fears seemed to be unfounded all along. However, Apple just provided one more piece of evidence that all is well at the tech giant. The company delivered strong earnings growth in the fourth quarter of its 2015 fiscal year, and projected solid growth for Q1 2016.

Apple's results beat expectations again
As has been the norm for the past couple of years, Apple comfortably beat both its own guidance and analysts' expectations in Q4. Apple had projected that revenue would reach $49 billion-$51 billion with a gross margin of 38.5%-39.5%. Taking into account the rest of the guidance, Apple's implied EPS forecast was about $1.81.

Apple's guidance is typically conservative, though. Not surprisingly, analysts expected a little more from the iPhone maker: revenue of $51.1 billion, and EPS of $1.88. Even that average estimate was too low, though. Apple's revenue rose 22% year over year, to $51.5 billion, while EPS jumped 38%, to $1.96, thanks to a 39.9% gross margin.

These strong results were primarily driven by iPhone demand, once again. Apple sold 48.0 million iPhones, up from 39.3 million a year earlier, while the average selling price rose to $670 from $603 a year earlier.

However, it was also notable that Apple's non-iPhone revenue grew 4.6% year over year in Q4 after declining during the first half of FY15, and rising 3.1% in Q3. The release of the updated Apple TV and the new iPad Pro this fall could add to that momentum in FY16, helping to diversify Apple's revenue a bit.

Given that Apple's revenue has never fallen below the midpoint of its guidance range since it revised its guidance policy in 2013, it's clear that the widespread fears of a Q1 revenue decline will not come true. Additionally, Apple's revenue growth would be 700 basis points higher in constant-currency terms. From that perspective, the guidance looks even better.

Of course, there's always the possibility of a big Q1 earnings beat. A year ago, the top of Apple's Q1 revenue guidance range was $66.5 billion, and the result was more than 12% higher than that. I don't expect anything quite so dramatic this quarter, but it wouldn't be very surprising based on Apple's guidance if revenue reached $80 billion -- a few percentage points ahead of guidance.

Keeping the fears alive?
Even as Apple decisively refuted the rumors that its revenue might contract during Q1 of FY16, some of the more skeptical analysts started to turn their attention to Q2. For example, analyst Toni Sacconaghi of Bernstein Research posited that Apple's fiscal first quarter was "structurally advantaged" this year, suggesting that subsequent quarters might be weaker.

Some analysts are worried that iPhone 6s demand could peter out after a few months. Photo: Apple.

Sacconaghi cited two main changes from last year's iPhone launch timing. First, Apple launched its new iPhones just two days before the end of Apple's fiscal fourth quarter this year compared to nine days before the end of the quarter last year. Second, Apple is selling the new iPhones in China for the whole first quarter this year after launching the iPhone 6 and iPhone 6 Plus in China in mid-October last year. Both factors would tend to shift demand into the first quarter.

However, Apple CEO Tim Cook noted that less than a third of the pre-September 2014 iPhone user base has upgraded to an iPhone 6 or 6s-series phone. This implies that there are still a ton of people waiting to upgrade. The rate of people switching from Android phones to iPhones is also at an all-time record, supporting demand growth.

Additionally, Apple will probably see continued strengthening in its non-iPhone revenue growth, with pretty easy comparisons coming in the next two quarters. In Q2 specifically, Apple will benefit from the first-full quarter of iPad Pro sales. That could keep overall sales growing even if the iPhone stumbles.

Finally, it's important to distinguish any individual quarter's results from broader trends. Apple is likely to roll out another big upgrade to the iPhone -- presumably the iPhone 7 -- in late 2016. That should drive another wave of faster growth at Apple.