After a tumultuous start to the year, investors in the stock market finally had a good week. The S&P 500 managed to put up a positive return of 1.44% during the short trading week, and many exchange-traded funds that focus on the healthcare sector performed even better. One ETF in particular -- the PowerShares Dynamic Pharmaceuticals ETF (NYSEMKT:PJP) -- was this week's best healthcare ETF. This fund produced a strong return of 2.7% during the past few trading days, allowing it to outpace the index. 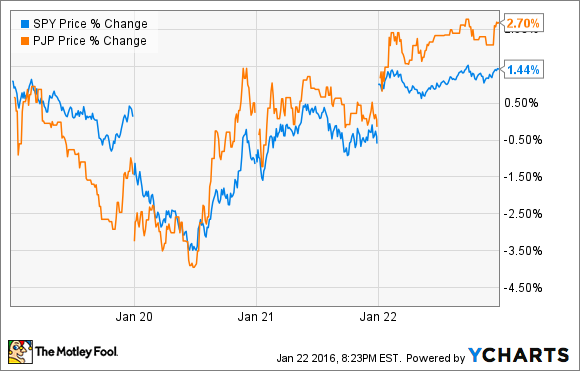 So what's going on inside the PowerShares Dynamic Pharmaceuticals ETF that cause it to perform so well?

Cracking it open
As its name suggests, the PowerShares Dynamic Pharmaceuticals Portfolio ETF invests the vast majority in is assets in the stocks of pharmaceutical companies. Unlike other healthcare ETFs that hold hundreds of stocks, this fund is quite concentrated, counting only 23 companies among its holdings. It also keeps the majority of its assets in the giants of the pharmaceutical industry: Its current weighted average market cap is north of $70 billion.

This focused strategy has worked out wonderfully for its investors. Since the fund's inception in June 2005, it has produced compounded returns of more than 18% per year. That performance has far outpaced the returns of the S&P 500. 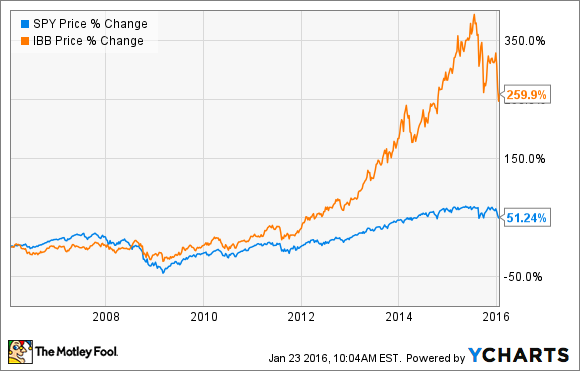 Top holdings
So what's this fund invested in right now? Here's a list of its top 10 holdings:

This table hints at just how concentrated this fund is. Its top 10 holdings comprise more than 50% of its total assets. Thus, as the share prices of these companies wax and wane, so does this ETF.

What went right this week?
While several of this fund's top holdings ended the week in the green, two stocks in particular -- Mylan NV (NASDAQ:MYL) and Amgen (NASDAQ:AMGN) -- put up stellar performances. 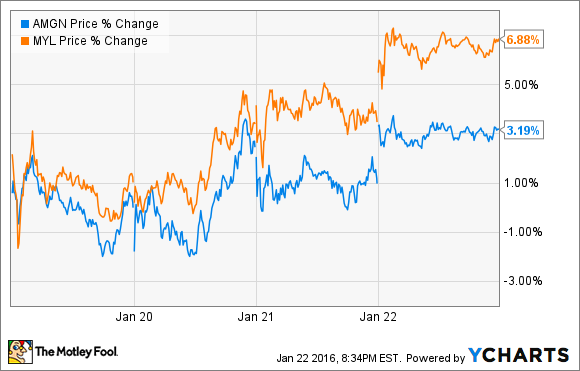 Mylan's shares jumped this week after news broke on Tuesday that Greenlight Capital, a hedge fund managed by famed investor David Einhorn, initiated a position in the company. Shares of Mylan have waned over the past few months after it tried -- and failed -- to take over fellow drugmaker Perrigo (NYSE:PRGO). The sell-off grabbed Einhorn's attention, because he believes that the combination of aggressive share repurchases and Mylan's huge backlog of 269 ANDAs currently pending FDA approval should allow its grow its earnings considerably over the coming years. Believing that the company's shares are a bargain right now, Einhorn forecasts that Mylan will generate roughly $7 in earnings per share by 2018.

Amgen's stock also popped this week after the company released two positive news items. First, Amgen's multiple myeloma drug Kyprolis successfully grabbed a FDA label expansion. Kyprolis has been approved for use as a combination therapy along with dexamethasone or with lenalidomide plus dexamethasone. Regulators also approved it as a single agent for patients with multiple myeloma who have previously received one or more treatments.

Investors were right to cheer this news, since Kyprolis is one of Amgen's fastest-growing drugs, so seeing it win a label expansion should ensure that its fast growth continues into the future.

In a separate announcement, Amgen and its partner Astellas Pharma announced that their new cholesterol-lowering medication Repatha managed to win regulatory approval in Japan. Repatha is the first PCSK9 inhibitor to be approved in the country, and when added to the other geographies it's available in for sale -- the U.S., EU, and Canada -- this development should help to ensure that it will eventually reach blockbuster status.

What's next for the PJP?
Given this ETFs long track record of success, it's clear that this fund has found a strategy that works well. Investors looking increase their exposure to the pharmaceutical sector should give this ETF a look.