Image by Juliacdrd via Pixabay.

Investors in the healthcare space should be filled with holiday cheer this week. The sector once again put up a strong performance, as many of the exchange-traded funds that focus on the space exited the week higher. Investors in the iShares Nasdaq Biotechnology ETF (NASDAQ:IBB) had a particularly good week, gaining 2.35% during the short trading period, which was good enough to leave the S&P 500 in its wake. 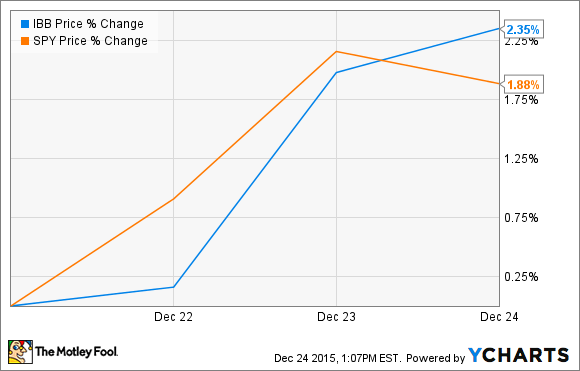 So what went right for the iShares Nasdaq Biotechnology ETF this week that allowed it to outperform?

Cracking it open
As its name implies, the iShares Nasdaq Biotechnology offers investors broad exposure to the U.S. biotechnology and pharmaceutical space. This ETF currently holds positions in 192 Nasdaq stocks in a sector well known by for its high volatility.

Although you'd think 192 positions would mean the ETF is well diversified, it's actually fairly concentrated. The top 10 positions comprise more than 50% of the fund's total assets.

Have a look for yourself to see what I mean.

This level of concentration makes the fund susceptible to big swings if one of its top holdings moves wildly in one direction or the other, and that's exactly what happened during the past few trading days.

What went right this week?
While many of the fund's top 10 holdings put up positive performances during the week, it was the ETFs No. 1 holding, Celgene (NASDAQ:CELG), that really put up a monster performance. Shares of the cancer-focused giant roared more than 10% higher during the short week. 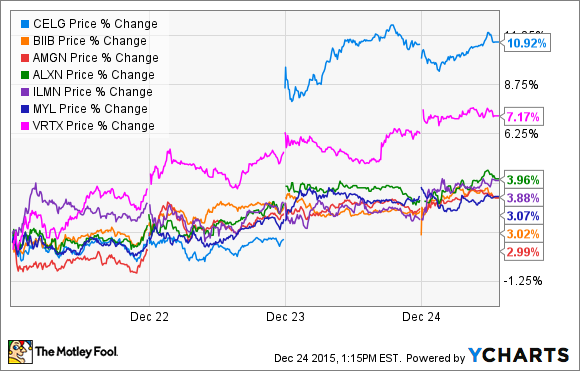 Celgene's shares skyrocketed after news broke that it had reached a settlement related to an ongoing patent dispute for its best-selling multiple myeloma drug, Revlimid. Investors have been worried for a while that generic versions would hit the market well before the drug's patents expired in 2027 and drastically slow Revlimid's sales growth. Seeing Revlimid encounter generic competition so early would blow a hole in the the company's financial statements as well, since Revlimid current accounts for well over half Celgene's total revenue.

Those fears can now be put to rest, as Celgene announced that it has struck a deal with Natco, Arrow, and Watson Laboratories to limit the amount of generic Revlimid coming to market in the coming years. Those manufacturers will be allowed to sell generic versions starting in March 2022, but only enough to represent a "mid-single-digit" amount of market share. That amount will be allowed to increase each year until January 2026, when manufactures can sell as much generic Revlimid as they want.

With Revlimid's last patent set to expire in 2027, the timing of the rollout looks to be favorable for Celgene. And by allowing generic versions of Revlimid to come online slowly, the company should have plenty of time to bring new drugs online to help keep its total revenue heading in the right direction.

That should allow both Celgene and in turn the iShares Nasdaq Biotechnology ETF to continue their winning ways in the years ahead.