After a string of strong years, will this year be another one for LyondellBasell?

LyondellBasell Industries (LYB -1.74%) is a large and diversified plastics, chemicals, and refining company. Earnings have grown every year since it came public in 2010, expanding at a fairly swift clip. That makes us wonder if 2016 will be the best year yet. The problem is that the world in which the company operates has changed.

A good run
There's no question that LyondellBasell has had a great earnings run since 2010, when it listed on the public markets again after going through the bankruptcy process. An important part of this success has been the U.S. energy Renaissance, which left natural gas prices at historically low levels. Natural gas is a key input to the company's products in the United States, while foreign competitors often rely more on oil.

Although the last year and half or so has left oil prices in the dumps, they were high relative to gas up until mid 2014, giving LyondellBasell an advantage in its industry. One way the company measures this advantage is by looking at the oil to gas ratio. Between 1999 and 2009, that ratio averaged around 8.5. It spiked to nearly 60 in 2012, but it has been coming down since then with oil's price decline.

To be fair, at the end of 2015, the oil-gas ratio was still a very healthy 20 or so, so 2015 should be another solid year. The problem is that oil has continued to fall this year, hitting prices last seen over a decade ago. In fact, according to LyondellBasell, the historic oil-gas spread suggests oil prices should be in the $20 to $25 range, and oil prices appear headed toward that range if the continued weakness is any indication. As oil prices inch lower, the company's advantage on the input side fades.

So, could 2016 be LyondellBasell's best year ever? Falling oil prices suggest that continued earnings advances could be harder to pull off than before. 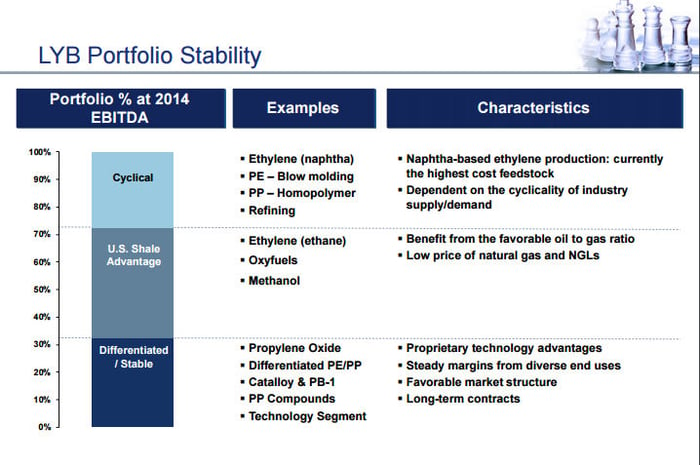 There more than just oil here
On the positive side of things, LyondellBasell is a fairly diversified company with operations around the world and in different industry segments. And since falling oil prices won't have the same dampening effect across the entire company, this is a headwind, not a death knell.

The company is doing things to make sure its earnings keep growing. One important trend has been expanding its operating margin, which has gone from the high single-digits when it IPOed to the low- to mid-teens. The key to that has been keeping operating expenses in check. The company believes its sales, general, and administrative expenses, for example, are among the lowest in the industry. Putting some numbers on that, LyondellBasell's SG&A expenses were just about 2.3% of sales in the third quarter of 2015 compared to DuPont's (DD) figure of around 20%. That's a big difference.

Perhaps more important, though, has been the use of profits to buy back stock. In 2011 and 2012, LyondellBasell paid special dividends, but it switched to stock buybacks in the following years. Essentially using what might be described as windfall profits to shrink the share count. That, in turn, supports future earnings growth and, more importantly, can soften the blow of top- and bottom-line weakness should the industry's tailwinds shift (like they are doing today). The company's share count has fallen by around 20% since since the start of 2013.

On top of this, LyondellBasell continues to invest in expanding its business through building new facilities and acquiring others. On that score, it recently gave the green light to a giant plant in Texas and acquired an Indian company that serves that nation's auto industry, materially expanding its presence there. So, there's a lot of good going on behind the earnings numbers. 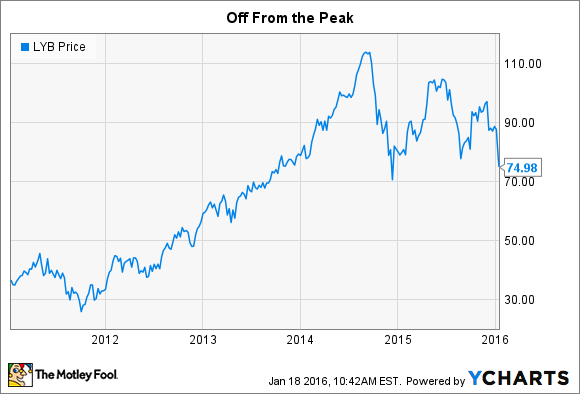 So, will 2016 be another great year?
At this point, it looks like LyondellBasell is doing the right things to make 2016 another good one. That said, oil prices are likely to be a notable headwind. So, in the end, it might be the best year yet, but just not by as wide a margin as some investors might have come to expect based on past performance. But with the share price already down by roughly 33% from all-time highs, it looks like that might already be priced in.