Through it all, Deere & Company actually raised its dividend by a nickel per quarter to $2.40 per share in 2015. Is another increase in store this year?

Operations are in a world of hurt
You might think Deere & Company would have a pretty stable business in Agriculture & Turf, as it calls the business, because no matter the economy, crops have to be grown, and the lawn has to be mown. But the consistency of use of John Deere equipment doesn't mean its sales are steady.

If you were in the market for a riding lawn mower, and the economy got rough, you could easily put off the purchase for a year or two and use an older mower. By the same token, farmers put off acquiring large equipment until profits are high and they have the money to buy it, which, as you can see below, isn't likely the case today given crop prices. 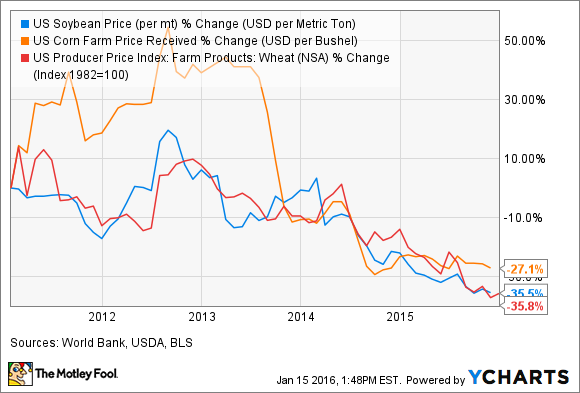 Agriculture & Turf is Deere & Company's biggest segment, and it's struggling because it's in a weak spot in the cycle. But Construction & Forestry segment sales are actually in worse shape. Fiscal fourth quarter net sales dropped 32% and operating profit plunged 72%, both driven by weakness in international markets.

The slowdown in China's economy has meant a big drop in demand for construction equipment, and a strong dollar hasn't helped matters. It's easy to argue that China and other parts of Asia were in a construction bubble over the past few years, but until there's a visible slowdown, companies don't know when the good times will end. For Deere & Company, the slowdown came in 2015, and I don't see an imminent turnaround in demand -- at least not in Asia.

But wait, there's good news
There's no doubt 2015 was bad for Deere & Company, but when it comes to the dividend, I think there's a lot to like. Earnings for the last fiscal year were $5.77 on a diluted basis, meaning more than 2 times coverage of the $2.40 dividend.

While fiscal 2016 won't be a great year, it also isn't expected to be a bad year. Analysts are looking for earnings of $4.23 per share, and keep in mind that Deere & Company actually beat estimates each quarter last year.

With earnings still well above the dividend payout, and Deere & Company on a streak of increasing its dividend every year since 2003, I think another increase is coming in 2016. But it probably won't be anything more than a symbolic dividend increase given the operating environment. And that's what investors should really watch long term, because if demand doesn't return, the company won't have much room to increase dividends in the future.