Please ensure Javascript is enabled for purposes of website accessibility
Log In Help Join The Motley Fool
Free Article Join Over 1 Million Premium Members And Get More In-Depth Stock Guidance and Research
By Jay Jenkins - Jan 23, 2016 at 8:42AM

JPMorgan paid out $0.44 in common dividends per share last year. Is there room for more?

In the fourth quarter of 2015, JPMorgan Chase (JPM -0.91%) returned $2.6 billion of net capital to shareholders. That broke down into $1 billion of net repurchases of shares and a dividend of $0.44 per common share.

That's pretty good, but I think shareholders will get even more dividends from the megabank in 2016. Here's why.

JPMorgan has a strong dividend history that shouldn't be overlooked
Historically, JPMorgan Chase has an excellent track record of prioritizing shareholders and dividends. The bank increased or maintained its dividend every year from 1990 all the way to the financial crisis, which most consider to be a once-in-a-generation financial meltdown. 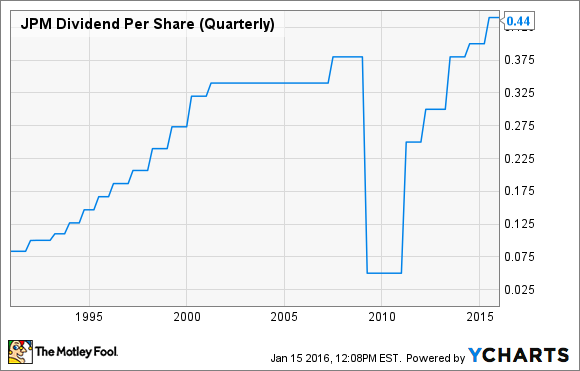 Since the crisis, the bank has resumed its dividend raising ways, increasing its payout each year since the end of 2010.

Of course, past performance is no guarantee of future success, but it does speak to a culture that puts shareholder priorities at the top of the list.

Reinforcing the "Fortress Balance Sheet"
One of JPMorgan Chase CEO Jamie Dimon's core philosophies is the so-called "fortress balance sheet." This means that the bank prioritizes strong credit and operational risk management, prudent capital buffers, and constant awareness of what could go wrong. With strong capital levels already on the books, the bank has more freedom to allocate profits to shareholders as dividends without dipping into its capital reserves.

Today, a fortress balance sheet is a prerequisite to any dividend thanks to the Federal Reserve's annual bank stress tests. These stress tests assess how a bank would be likely to fare in the event of a major economic shock. Before a bank can raise its dividend or buy back shares, it must pass this test and secure approval from the Fed.

Last year, JPMorgan passed the stress test unconditionally and was approved for a 10% dividend raise and $6.4 billion in share buybacks. For context, Wells Fargo (WFC -0.28%) also received an unconditional approval and upped its dividend 7%. Bank of America (BAC -0.43%), on the other hand, received only a conditional approval, which allowed it to maintain its existing dividend without an increase and required the bank to resubmit a revised capital plan.

The Fed found that JPMorgan and Wells each had robust balance sheets and the stress testing protocols needed to manage their risks. Bank of America had adequate capital but lacked the processes to produce reliable stress test results. In other words, Bank of America's risk culture was not up to snuff, while the culture of the fortress balance sheet permeates JPMorgan's culture, starting at the very top.

JPMorgan's balance sheet looks even stronger today than it did for last year's stress test. The bank's balance sheet is $200 billion smaller than it was last year, translating to a reduction in risk-weighted assets of about 7.5% year over year. The bank's tier 1 capital ratio improved from 11.4% to 13.3%, and its common equity tier 1 ratio strengthened from 10.2% to 11.6%.

*Bank of America numbers as of Q3 2015. Q4 numbers not available at the time of this writing

If the Fed approved JPMorgan's 10% dividend raise last year and its ratios are even better now, it follows that JPMorgan should be in line for another unconditional approval this year.

Incredible expense control and a rising interest-rate environment
To earn profits and distribute them as dividends, companies must grow their top line and control their expenses enough to turn that growth into higher profits. JPMorgan is highly adept at controlling expenses, and a rising rate environment in 2016 will virtually assure higher revenues. To me, that indicates higher dividends to come.

First, the top line. In December, the Federal Reserve raised its benchmark interest rate for the first time since 2006. When rates rise, banks tend to benefit because they can charge more interest on the loans they make and find higher yields on their bond investments. The interest they pay for their funding -- customer deposits and some borrowings -- tend to not rise as high or as fast as the bank's earning assets. Together, this improves both the bank's top-line revenue as well as the margin between the bank's interest income and its interest expenses.

As long as the Fed continues to increase interest rates, JPMorgan, Wells Fargo, Bank of America, and all the rest should benefit handsomely on their income statements.

On the operating expenses side, we can look to the efficiency ratio, sometimes called the overhead ratio, as a tool to measure how well a bank controls its expenses. This ratio is reported as a percentage, and it measures the expenses required to produce a dollar of revenue. A 50% overhead ratio, therefore, means that it took a bank $0.50 in expenses to produce $1 in revenue.

JPMorgan's fourth-quarter overhead ratio was 60%, compared to 65% for the prior year's fourth quarter. This change was driven by a 7.4% decrease in the bank's non-interest expenses, much of which came from reduced legal bills. For context, Wells Fargo's was 57.4% for the same quarter, while Bank of America's most current available efficiency ratio was 66% for the 2015 third quarter.

If the bank can ride the wave of higher rates and continue to effectively control expenses, that should generate the higher profits needed to drive a 2016 dividend increase.

For JPMorgan, it all comes back to culture. It's the culture of putting shareholders first and prioritizing dividends. It's the fortress balance sheet and preparing the bank for the worst-case scenario. It's about protecting every dime of profit with expense management and efficiency.

Put all that together and, at least to me, you have a bank that is likely to keep raising its dividend for a while to come.