Please ensure Javascript is enabled for purposes of website accessibility
Log In Help Join The Motley Fool
Free Article Join Over 1 Million Premium Members And Get More In-Depth Stock Guidance and Research
By Jay Jenkins - Jan 24, 2016 at 7:14AM

Even the very best stocks occasionally fall on hard times.

Among U.S. banks, US Bancorp (USB 0.68%) is among the best. It's a leader in profitability, risk management, and stock price performance. It's efficient, shareholder friendly, and has a proven history through all phases of the credit cycle.

But no company or investment is without risk, and despite the bank's excellent performance, its stock could fall. Here are three reasons why that may happen.

US Bancorp is already very expensive
Compared to other large regional and national banks, US Bancorp trades at a very steep premium. 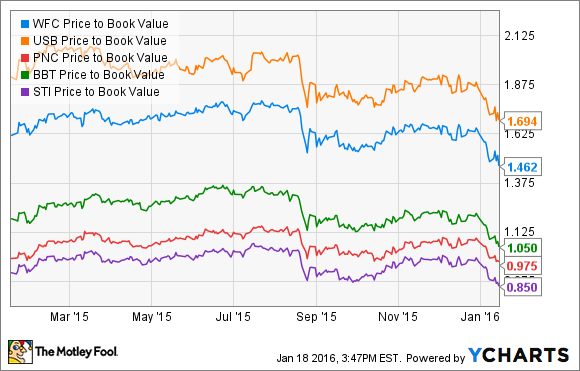 Based on the bank's performance, the premium stock price is justified. US Bancorp reported 1.44% return on assets, 14% return on common equity, and a very impressive 53% efficiency ratios. Among large banks, that performance stands well above the rest.

These numbers are quite strong and a testament to the bank's exceptional management. However, it's not easy to be this great forever. Investors must ask if it can continue. Should the stock trade above 1.7 times book value if it falters for a quarter or a year? What if unforeseen credit problems drive reserves and losses higher? What happens to the stock if the bank's profitability ratios drop to the levels of its more pedestrian competitors?

Because the bank is currently so expensive, I think a relatively minor hiccup could send the stock down considerably lower than other banks on a relative basis. The two reasons that follow this section are possible triggers that could send US Bancorp and other bank stocks lower. The blessing and the curse for US Bancorp0 is that they simply have farther to fall to come back to Earth.

Low oil prices could trigger a problem for US Bancorp. The problems have already started at other banks.
One of the biggest stories in investing today is the continuing slide in oil prices. With crude now trading near or even below $30 a barrel, industries with tangential exposure are now beginning to feel the energy sector's pain. Banks are no exception.

US Bancorp increased its reserves for credit losses by $305 million, or 5.9% in the fourth quarter. US Bancorp has a $3.2 billion portfolio to the energy sector, but management stated on the fourth quarter earnings call that thus far the bank has not seen a concerning number of problems from that portfolio. In this regard, at least, US Bancorp's management seems out of step with others in the industry. 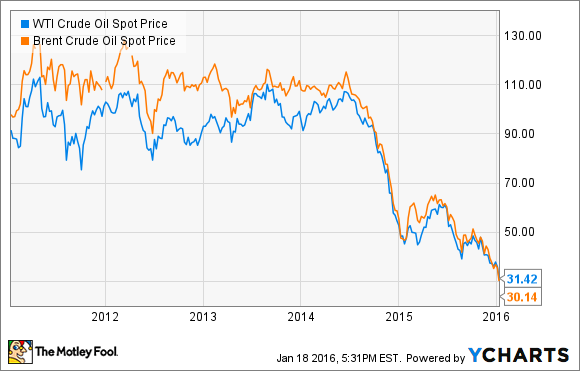 Wells Fargo increased its reserves for problem loans by over 18% in the fourth quarter, driven mostly by a $90 million increase for loans to the oil and gas sector. The bank also reported that over 90% of its oil and gas loans were current on their interest payments at quarter end. That implies that its higher reserves were driven by specific, known problem situations as well as a general acknowledgment of the challenges facing that portfolio.

PNC Financial Services CEO William Demchak told analysts that the problems in oil and gas are "starting to spread." Citigroup added $250 million to its reserves due to problems with its the oil and gas portfolio.

Could US Bancorp simply have a higher quality oil and gas portfolio than the competition? That's certainly possible, but it's also possible that the bank is underestimating the problem and setting itself up for much higher reserves or even losses if low oil prices persist. Only time will tell, but this could certainly be a trigger to drive the stock lower.

The cyclical nature of the U.S. consumer
On the company's fourth-quarter conference call, US Bancorp's president, Richard Davis, described the most important thing for the bank going forward:

"The most important thing to happen to us is just a continued improved recovering economy where people feel they can consume. People feel they don't have to save quite as much and that they've got a higher backstop either in their own savings account or in their home equity, or in their own debt positions where they can start spending money and feel more comfortable about it."

The bank earns the majority of its income from mortgages, credit cards, consumer loans, and business loans. All of these products and business lines are directly correlated to American households spending money, buying goods or services, and maintaining the income needed to pay back their loans. So what happens if American consumers lose their willingness or ability to consume?

In December, the Federal Reserve took the first step to returning interest rates to historically normal levels, raising their target for the Federal Funds rate to 0.25%. That move was largely symbolic, but it foretells of more rate hikes to come. With rate hikes, access to credit becomes more expensive for consumers and businesses. That alone could be enough of a headwind to keep individuals from consuming. 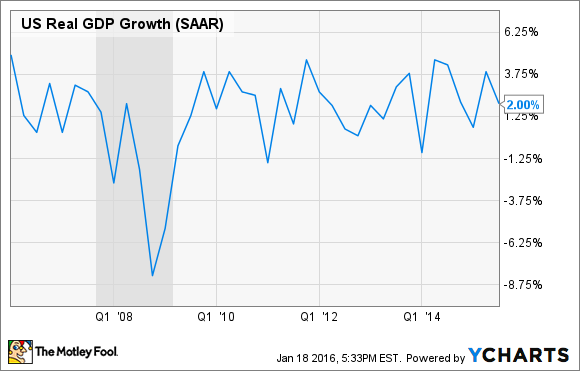 It's been eight years of economic growth since the onset of the financial crisis. Historically since World War II, the U.S. has experienced a recession about every five years. Does this imply we are overdue for a recession? I don't think so, and this by no means predicts a recession, but it does show that our economy cycles from expansion to contraction and back to expansion again. Consumers won't keep spending unabated. Whenever the cycle turns again, US Bancorp and many other stocks will suffer. Are rising rates enough to tip the scale? Could the problem arise from problems overseas, as we are currently seeing in the Chinese economy?

It's impossible to predict exactly when or how significant macroeconomic changes like a recession will occur. But when (and if) it does turn, expect US Bancorp's stock to fall, possibly even more so than other banks due to the bank's already sky high valuation.

US Bancorp is an elite bank and deserves all the credit it gets from investors. The bank's performance numbers are nothing short of incredible. The bank has an excellent track record through multiple credit cycles, and there's no obvious reason to expect that performance to change. However, that doesn't mean the stock will go up forever -- almost no stock will. Higher interest rates, low oil prices, or another unforeseen economic headwind could be enough to trip up the stock and cause it to fall in 2016.

Jay Jenkins has no position in any stocks mentioned. The Motley Fool owns shares of and recommends Wells Fargo and has the following options on it: short March 2016 $52 puts. Try any of our Foolish newsletter services free for 30 days. We Fools may not all hold the same opinions, but we all believe that considering a diverse range of insights makes us better investors. The Motley Fool has a disclosure policy.