Spirit Airlines (SAVE -0.45%) investors came into 2015 with high hopes as fuel prices plummeted and the carrier prepared to ramp up its growth rate. Spirit Airlines stock rose above $80 as its profit outlook for 2015 soared.

Indeed, in early February, Spirit projected that its full-year operating margin would be between 24% and 29.0%, up from the record 19.2% operating margin it produced in 2014. Unfortunately, management had to cut its margin guidance twice in the next six months. This helped drive the stock down by 60% from its highs. 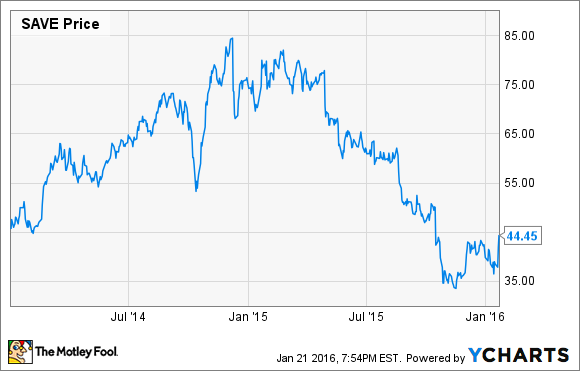 However, while 2015 wasn't quite as good a year as Spirit's management originally expected, it also wasn't as bad as management (or investors) have feared in recent months. The company's recent guidance update made that crystal clear -- sending Spirit Airlines stock up 11% on Wednesday and up another 6% on Thursday.

Guidance comes down
Spirit Airlines' original margin guidance for 2015 assumed that domestic airfares would remain fairly stable despite the steep drop in oil prices. Instead, various airlines used their fuel cost savings to lower prices on routes where they compete with Spirit.

American Airlines Group (AAL 1.73%) was most aggressive in this regard. More than half of the carrier's revenue comes from customers who fly American just once a year. Thus, American Airlines decided that it needs to compete on price -- even with budget carriers like Spirit -- to avoid losing customers.

This policy may have contributed to American Airlines' mid- to high-single-digit unit revenue declines in recent quarters. But the impact was even greater for Spirit Airlines. In Q3, its total unit revenue fell by a stunning 17.5% year over year.

As this situation developed, Spirit Airlines cut its full-year operating margin guidance range: first to 24% to 27% in April, then to 21.5% to 23.0% in July.

Guidance goes back up
However, since July, Spirit has been able to not just maintain but actually improve its 2015 margin guidance. In July, Spirit forecast that it would produce a 22% to 25% operating margin in Q3. Spirit's adjusted operating margin for the quarter ultimately reached 27.4%, despite the sharp unit revenue decline noted earlier.

As of October, the company still expected a 21.5% to 23% full-year operating margin. As it turns out, this forecast was too conservative. In Spirit's investor update released last week, it raised its Q4 operating margin guidance by 5 percentage points: from 17.5% to 22.5%. Both fuel and non-fuel costs were lower than expected, while revenue came in higher than expected.

Both revenue and costs came in better than expected for Spirit in Q4. Image source: Spirit Airlines.

For 2016, Spirit Airlines plans to boost capacity by 20%, which could lead to another year of double-digit revenue growth. Meanwhile, with jet fuel prices falling to levels not seen in more than a decade, Spirit's profit margin could reach another record this year.

Longer-term, Spirit Airlines' industry-leading cost structure and large market opportunity should allow it to produce many more years of double-digit profit growth. With the stock still trading for just over 10 times Spirit's 2015 earnings per share, long-term investors should stay the course.