Please ensure Javascript is enabled for purposes of website accessibility
Log In Help Join The Motley Fool
Free Article Join Over 1 Million Premium Members And Get More In-Depth Stock Guidance and Research
By Luke Neely - Jan 24, 2016 at 10:00AM

The deal recently cleared EU approval, which possibly set the stage for the deal the complete.

FedEx (FDX 0.93%) investors welcomed the recent news that EU regulators approved of their company's acquisition of Dutch-based TNT Express. The approval moves FDX one step closer to the completion of a deal that will make FedEx one of the biggest ground parcel providers in Europe and position it nicely in the growing global e-commerce market. Let's take a look at how we got here, and what a completed merger would mean for FedEx.

The deal
On April 7, 2015, FedEx made an offer to acquire TNT Express for 8.00 euros per share in cash, with an implied equity value of $4.8 billion. The combined company will become one of the top businesses in the transportation and logistics industry, particularly in Europe.

"We believe that this strategic acquisition will add significant value for FedEx share-owners, team members, and customers around the globe," says FedEx CEO and Chairman Frederick W. Smith. "This transaction allows us to quickly broaden our portfolio of international transportation solutions to take advantage of market trends – especially the continuing growth of global e-commerce -- and positions FedEx for greater long-term profitable growth."

The EU approval ended a six-month investigation and put and end to some uncertainty. EU authorities blocked a similar deal between UPS (UPS 2.18%) and TNT Express in 2013.

But although the EU was seen as the biggest hurdle, several other countries still need to approve the deal, including China and Brazil. China has been known to hold up deals in the past, but FedEx says it's confident the deal will be completed in the first half of 2016.

Is there an opportunity?
Continued e-commerce and global trade growth should give FedEx a long wave of demand growth for shipping. UPS and DHL are its main competitors, but based on margins and revenue, they have a difficult time competing. FedEx also has the advantage of reputation: Fortune magazine recently recognized it again as one of the world's 10 most admired companies, and No. 1 in the delivery industry.

The company also enjoys a significant competitive advantage with its transportation infrastructure and worldwide brand recognition. It serves markets that comprise more than 90% of the world's GDP, and its popular Express product offers reliable delivery within one to three days. At home, the U.S. Ground segment has a stranglehold on ground transport, which is the primary profit driver.

The industry as a whole is fairly attractive because of the incredibly high barriers to entry that have allowed companies like FedEx, UPS, and DHL to thrive. In an industry with limited players, mergers can play an important role in increasing market share, revenue and profitability. TNT currently generates $7.39 billion in revenue that will flow to the top line. This deal will, naturally, increase FDX's market share significantly, placing them right behind UPS. 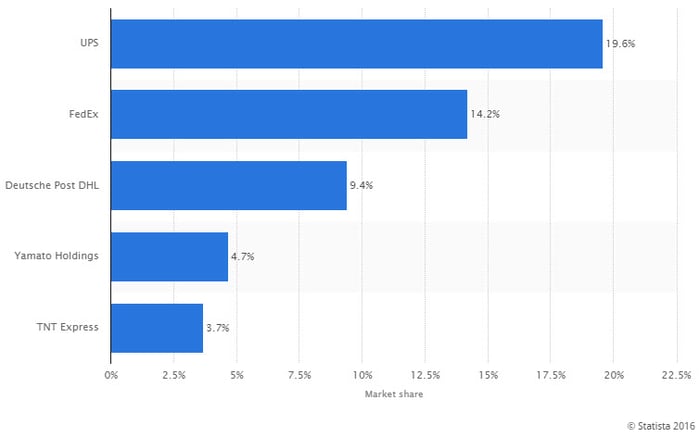 The combined company will allow FedEx to capitalize further on the growing market for international door-to-door express packages. In a world with decreasing U.S. exports caused by US dollar increases, the EU approval is a welcome sign for FedEx investors.

Bottom line
FedEx already has a wide moat in the transportation and logistics industry, but it delivers in and out of Europe with limited options. The acquisition of TNT will significantly expand its reach, making the company the third largest in the European express-delivery market, behind only DHL and UPS. E-commerce is a strong global trend, and this deal will ultimately add to FedEx's growth prospects in the long term.

Shares appear to be overvalued at current levels, with a P/E of 31.70 and a LTM Price/Free Cash Flow of 58.36. I'd wait for further pullbacks in FedEx before initiating a position, but FedEx's competitive position should allow it to compound returns well into the future.