What would it take for this leading broker and asset manager to stumble in 2016?

The Charles Schwab Corporation (SCHW 2.26%) has beaten the S&P 500 over the past one-, 10-, and 15-year periods. That's a pretty good run, and there are plenty of reasons that performance could and will likely continue.

But there are also valid reasons the stock could fall that, though unlikely, could still occur. Here are three such reasons that I think investors should be watching.

Charles Schwab stock could fall, if the company stops growing
Compared with other companies whose primary business is managing money and administering investment funds, Charles Schwab looks very expensive. The company's stock has a price to earnings ratio well above its peers, including being double that of State Street Corp (STT 3.18%) and nearly double BlackRock (BLK 1.18%), two behemoths of money management. 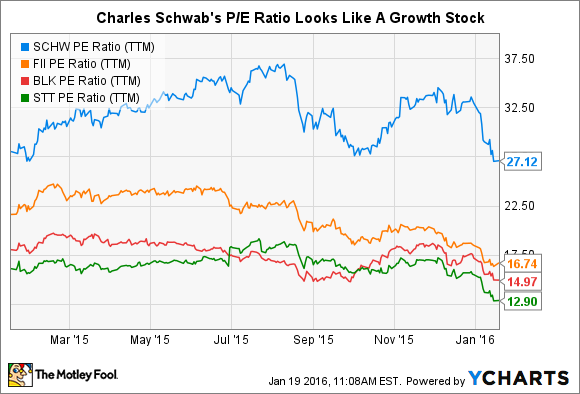 There's a good reason for this high P/E ratio though, and that reason is growth. Compared with Schwab, State Street, BlackRock, and others look downright pedestrian.

Over the past six years (and even before that), Schwab has been growing like a weed. The company's assets under management, total assets, and other pertinent metrics have all seen significant increases, justifying the market's pricing of Schwab as a growth stock compared to the competition. 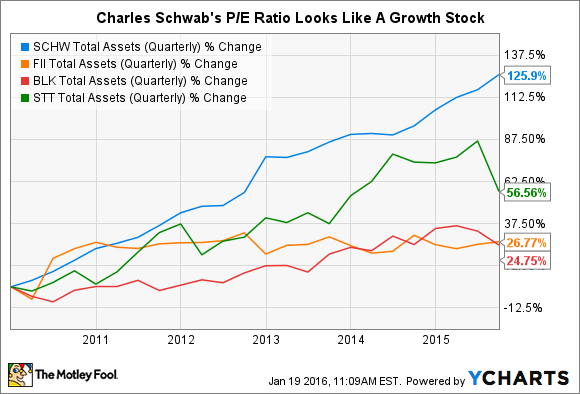 The stock's high P/E can be justified so long as the company is growing assets and earnings. However, if that growth stalls, the stock could see its valuation fall in line with others in the industry

If interest rates don't rise
Since the financial crisis, Schwab and other money managers have left considerable revenues on the table because of low interest rates.

With rates being so low, normal fees charged on money market and other funds would have pushed investor returns into the negative. Instead of doing that, asset managers elected to waive the fees until interest rates normalized.

The scale of this cash is massive. The Wall Street Journal calculated that the industry waived $6.3 billion in fees in 2014 alone. 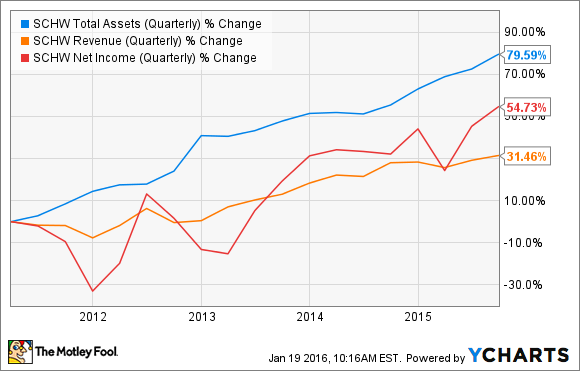 Charles Schwab Corp. alone waived $2.34 billion from 2009 through 2014. In 2015, Schwab waived $651 million in fees. Until interest rates rise, the company will continue to leave these huge sums of money on the table, to the detriment of the bottom line and shareholder returns. This phenomena is visible in the chart above, as the company's tota assets have grown considerably faster than its net income and particularly its revenue.

Schwab reported $1.4 billion in net income available to shareholders for 2015. Adding back fee waivers, and assuming that cash flows directly to the bottom line, net income could have theoretically increased by 46.5%.

For some money managers, the fee waivers have already started to reverse. For example, Federated Investors (FHI 0.77%), a smaller Schwab competitor, reported in its third-quarter earnings an 8% increase in revenues for the quarter and 6% year over year, primarily driven by a reduction in fee waivers over both time periods. Federated is scheduled to report fourth-quarter results on Jan. 28.

The market expects Schwab and other asset managers to reinstitute these fees as soon as interest rates allow it. If market rates don't rise as fast as expected or if the company fails to successfully charge their old fees, the stock could easily fall to reflect lower net income expectations.

If Charles Schwab, the man himself, retires
Anytime a company's founder steps away, investors must worry about the implications for the firm's leadership, culture, and strategy. In this case, the Charles Schwab Corporation's stock could fall when company founder Charles Schwab decides to fully leave the company. Schwab is currently the company's chairman of the board and was CEO as recently as 2008.

Schwab is a visionary leader for the company, turning what started as a simple investment newsletter in 1963 into a global player with a market cap over $35 billion today.

When Schwab stepped down from the CEO role in 2008, then Chief Operating Officer Walt Bettinger assumed the day to day leadership of the company as CEO. 55 year old Bettinger is an entrepreneur at heart, similar to Schwab, founding his first company at age 22 before eventually selling it to Schwab in 1995. Since then, Bettinger has excelled in various roles at the Charles Schwab Corp. The company currently does not have a chief operating officer, the position held by Bettinger before his promotion to CEO.

The Bettinger/Schwab combination has thus far had great success steering the company in the post financial crisis world. However, the company's succession plan remains a question mark worth consideration. Does the board of directors have the strategic thinking and leadership to replace Schwab's contribution when he does fully retire? Is Bettinger's bench of managers up to the task of leading the company and preserving its culture without the founder's support and guidance?

Only time will tell, but if Schwab retires and the company's new leadership is not up to the task, expect the stock to struggle.

Jay Jenkins has no position in any stocks mentioned. The Motley Fool recommends Federated Investors. Try any of our Foolish newsletter services free for 30 days. We Fools may not all hold the same opinions, but we all believe that considering a diverse range of insights makes us better investors. The Motley Fool has a disclosure policy.