Among other assets, the company owns the FOX television network, a number of cable channels, including its self-titled news network, and a movie studio. Over the past year, FOX performed well with its television properties, but it stumbled in theaters. Though it did have some hits -- The Martian and Kingsman: The Secret Service were big moneymakers -- it also had a spectacular failure that not only cost it money, but also kills a potential franchise.

Fantastic Four, a too-soon reboot of the comic book series actually managed to do the near-impossible. At a time when Disney (NYSE:DIS) can make a hit out of the little-known Ant-Man, played by always-a-sidekick, never-a-successful-lead Paul Rudd, it's stunning that Fox could not deliver a hit with one of the comic world's best-known properties. But, that's exactly what happened as the new take on Mr. Fantastic, The Thing, and the rest of the super-powered gang brought in only $56 million domestically, and another $111 in the rest of the world, according to Box Office Mojo.

That makes the movie a bigger flop than even John Carter, a Disney pic that bombed so badly compared to its budget that a book was written about it. That film managed to bring in nearly $300 million globally, according to Box Office Mojo, but as was the case with Fantastic Four, the failure was compounded by what the company lost in sequel, merchandising, and other tie-in potential.

The failure of Fox's summer tentpole illustrates the highs and lows of one of the company's chosen industries. Movies can be surprise hits or surprise bombs. The same can happen with television networks, albeit a little more subtly, leaving the company open to stock swings. 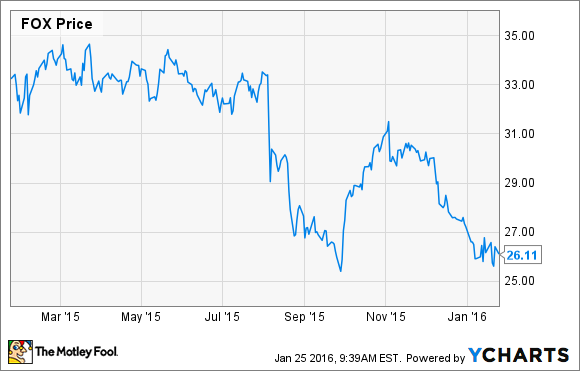 As you can see Fox shareholders have not had a steady ride for the last 12 months. Source: YCharts.com.

Movies are a rough game
One of the reasons Disney has been such a solid player in the movies business is that it has a number of franchises that are essentially sure things. Any film bearing the Marvel or Pixar labels will almost certainly make money, and any animated film given the Disney banner will almost certainly perform as well. The same will likely be true of any further Star Wars films, and this takes away risk for the company.

That's where the failure of Fantastic Four hurts the most. The film bombing robbed FOX of not only a franchise, but a film universe full of potential spinoffs. This leaves the company in the more vulnerable position of still having to release big-budget films that don't necessarily have a built-in audience. That won't be as much the case this year given that the company has Independence Day, Kingsman, and X-Men sequels on tap, but even with those films, the FOX slate is much riskier than Disney's.

Quick end to elections
FOX News, with its right-wing slant, has been a top cable network with its mix of news and personalities. The company should continue to draw a big audience as long as there is no quick end to the election season. If, however,  the frontrunners on both sides -- Donald Trump and Hillary Clinton -- wrap things up early (which doesn't seem likely) the news channel could lose months of high-interest programming.

A long primary season, specifically on the Republican side, guarantees huge interest every time a vote is taken. It it just becomes a formality, then the audience will tune out until the party conventions start gearing people up for the general election.

Of course, the holy grail for FOX News would be drawn-out primaries followed by something crazy like former New York City Mayor Mike Bloomberg entering the race.

Cord-cutting is looming
Cable television and the FOX network have been major revenue-drivers for the company, but both remain vulnerable to cord-cutting, or even cord shaving -- people looking for cheaper bundles of channels. If people drop cable, they could, in theory, still pick up the FOX network via an HDTV antenna. But, they may choose not to do so and simply elect to use streaming networks to meet their entertainment needs.

Cord-cutting has not been a massive problem yet, but if the momentum grows -- and there were signs in 2015 that it might -- than it would be very bad for the FOX family of cable stations. FX, FX2. Fox Sports 1 and 2, as well as FOX News, all get hurt in a cable world that's smaller. Fewer subscribers mean lower carriages fees, cheaper ad rates, and generally bad news for the channels.

FOX is actually pretty well set up
The good news for FOX shareholders is that the company has a strong movie slate, the primaries appear likely to be heavily contested, and cord-cutting may grow, but it probably won't explode this year. Still, the company is operating in two fields where it does not take much to move from success to failure.

Even one movie bomb that was expected to be a hit -- perhaps audiences rejecting a Will Smith-free Independence Day sequel -- can send stocks down. FOX has a strong year ahead of it, but it's a path filled with potential trip wires, where a number of things that are expected to fuel its success could go wrong in a hurry.