Please ensure Javascript is enabled for purposes of website accessibility
Log In Help Join The Motley Fool
Free Article Join Over 1 Million Premium Members And Get More In-Depth Stock Guidance and Research
By Lee Samaha - Jan 25, 2016 at 11:14AM

The powertrain company is trying to reset investor expectations and regain the market's confidence.

While equity markets have been tough in 2016, BorgWarner's (BWA -3.02%) nearly 33% fall year to date, and its 42% decline in the past year, both deserve some inspection. Part of the reason for the fall was the company's recent disappointing guidance. So let's take a closer look at what's going on and whether the stock is now worth buying. 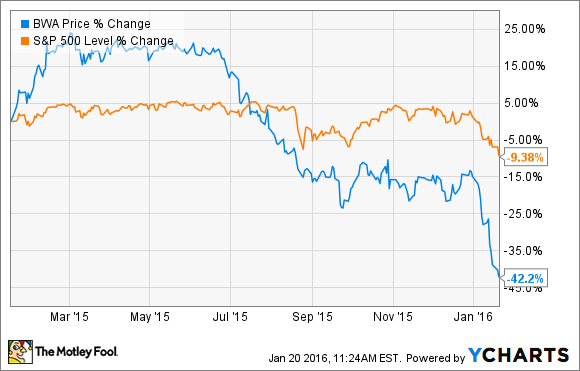 BorgWarner lowers growth estimates
After a difficult 2015, in which management lowered investor expectations for three quarters in a row, the market was ill prepared for the guidance cut unveiled at the Deutsche Bank Auto Industry Conference in mid-January. In a departure from its usual practice, management gave detailed earnings guidance for the first quarter of 2016 and the full year. However, it was the cut to its mid-term outlook that caught my eye.

BorgWarner significantly reduced its new business expectations for the next couple of years. The market reacted by promptly taking the stock down by double digits. In fact, the midpoint of growth expectations for 2016 to 2017 was cut by some 55%, from 1,100 million to 500 million. The reason? In his presentation, CEO James Verrier attributed the reduction to two factors:

In a nutshell, the company's previous guidance proved overly optimistic, and management is resetting investor expectations to a more realistic set of targets. Indeed, management went on to express comfort in hitting these targets, and also its EPS forecast for $3.11 to $3.22 for the full year 2016.

Time to buy?
While the downgrade is disappointing, the case for buying stock is starting to look more attractive. It's based on four points:

I've dealt with the first point already. Turning to underlying demand, Verrier assured investors that demand for its products remained in place and reiterated claims that even with a potential increase in the electrification of the powertrain -- brought about by increasing electric vehicles -- the company could still prosper. It's cause for concern, because BorgWarner's most important products are diesel and gas turbochargers.

In valuation terms, the stock now trades at around $30, so even if you accept the low point of 2016 EPS guidance, it trades on a forward P/E ratio of around 9.6. Similarly, the low point of its 2016 free cash flow guidance of $400 million to $475 million puts it on a forward free cash flow-to-enterprise value yield (EV being market cap plus net debt) of slightly more than 5% -- not bad for a company investing heavily to develop products for future regulatory requirements on vehicles.

Finally, other companies have given positive outlooks on auto demand in 2016. For example, Johnson Controls (JCI -0.80%) expects China's automotive production to increase almost 11% in 2016, with government incentives spurring demand.

Two concerns
Before hitting the buy button, there are two key considerations.

First, management's argument that issues with launch timing, volume, and cadence were behind the larger part of the reduction in its guidance. In reality, when an economy slows down, it's very common to hear companies discuss launch delays and the issues with the timing of sales patterns. Frankly, it's very difficult to divorce these issues from macroeconomic concerns. In other words, if the economy keeps slowing, then there is no guarantee that BorgWarner might not face more launch delays and the like.

Second, the guidance that companies such as Johnson Controls have been giving on automotive sales in China, the world's largest market, appears to rely on the current spurt of growth continuing through 2016. On Johnson Controls last earnings call, CEO Alex Molinaroli said the Government of China would have incentives in place for at least 15 months -- the industry is strategically important to the country.

On the other hand, China's economy has definitely slowed, and when the incentive impact fades, it's hard to know where automotive sales will go -- an especially pertinent consideration for Johnson Controls investors due to the intended spinoff of its automotive business later this year.

The takeaway
All told, management is trying to regain the confidence of the market by taking down expectations and being more prudent in its sales assumptions. All of this is a good thing and helps build a base for the stock. However, while the uncertainty on the outlook for auto sales -- particularly in China -- remains in place, the stock is probably one for cautious investors to avoid. For those convinced the auto sector will have a good year, now could be a good time to invest in the stock.

Lee Samaha has no position in any stocks mentioned. The Motley Fool owns shares of Johnson Controls. The Motley Fool recommends BorgWarner. Try any of our Foolish newsletter services free for 30 days. We Fools may not all hold the same opinions, but we all believe that considering a diverse range of insights makes us better investors. The Motley Fool has a disclosure policy.