Please ensure Javascript is enabled for purposes of website accessibility
Log In Help Join The Motley Fool
Free Article Join Over 1 Million Premium Members And Get More In-Depth Stock Guidance and Research
By Cory Renauer - Jan 25, 2016 at 8:41AM

Find out where some investors might find better dividend growth opportunities.

Becoming overly complacent in your assumptions is one of the most dangerous things an investor can do. This is why I like to start each year with a cold-hearted look at my core holdings to see if I can do better.

Even though I'm a proud member of the Johnson & Johnson (JNJ 0.33%) fanclub, I'd like to walk you through some figures that suggest certain investors might consider either Cardinal Health (CAH -1.08%) or Gilead Sciences (GILD 0.77%) a better dividend investment opportunity.

Anyone paying attention to the healthcare sector, or the stock market in general, should be familiar with the runaway success of Gilead Sciences' HIV and hepatitis C products. Cardinal Health, on the other hand, may be one of the largest companies you've never heard of. With over $100 billion in annual revenue, it's one of America's big three medical distributors, and in fact, it's responsible for a double-digit percentage of Gilead's total product sales.

What have you done for me lately?
With just 19 years of consecutive dividend raises, Cardinal Health can't hold a candle to Johnson & Johnson's 53-year track record. Look at the pace of those increases over the past decade, however, and you'll see Cardinal Health is winning by a mile. 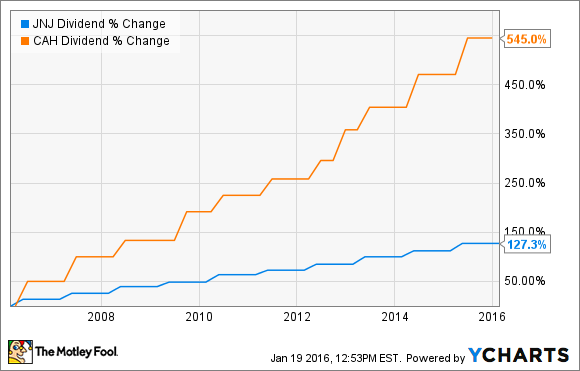 Of course, past performance doesn't guarantee future results. Luckily, Cardinal has a significant advantage that should help its dividend continue this trajectory in the years ahead.

Medical supply wholesalers operate on paper-thin margins, but that's not necessarily a bad thing. The company's size and scale allow it to remain profitable while offering prices to its customers that would-be competitors couldn't begin to match. To increase this advantage, in 2014, Cardinal formed the Red Oak Sourcing joint venture with CVS Health, America's leading retail pharmacy chain. Combined, the juggernaut negotiates generic pharmaceutical supply contracts that either company would probably be incapable of wrangling on its own.

Although Cardinal has been expanding operations beyond America's borders, the vast majority of its revenues are earned in U.S. dollars. Johnson & Johnson's international operations have been hit hard by the rising greenback, turning a 1% operational gain into a 6.8% loss in reported revenue during the first nine months of 2015 as compared to the same period in the previous year. Now that the Fed has begun tightening monetary policy, that's a trend many economists expect to continue. 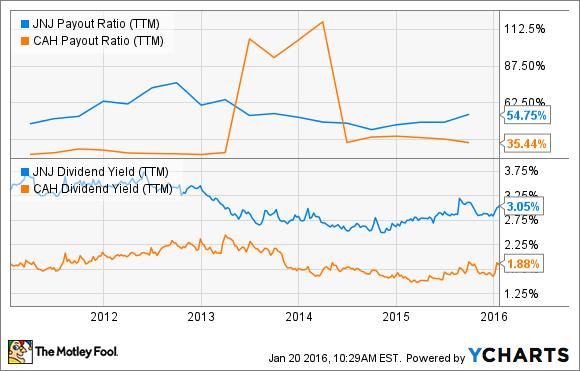 Looking at the two companies' payout ratios -- the percentage of profits required to make dividend payments -- both have plenty of runway left to continue increasing distributions. However, I expect Johnson & Johnson to remain somewhat conservative. With its medical device and consumer segments at something of a standstill, the company's growth is heavily dependent on riskier development of new drugs in its pharmaceutical segment. Cardinal Health, on the other hand, is well positioned to take advantage of a rapidly aging U.S. demographic increasingly dependent on drugs, regardless of who develops them.

Another animal altogether
Wholesale medical distribution may offer a great deal of stability, but I'll admit it isn't terribly exciting. Dividend income seekers with a much healthier appetite for risk might want to consider Gilead Sciences. Its dividend program may be less than a year old, but the company is generating free cash flow at a mind-boggling rate. 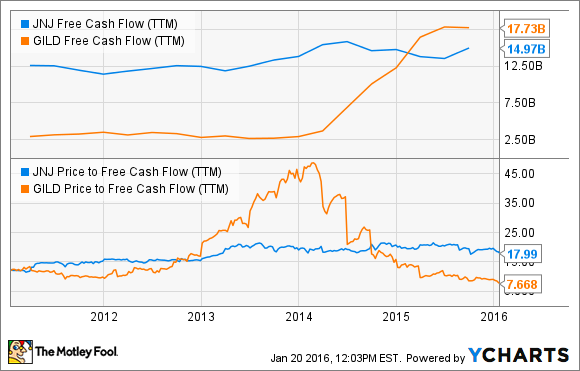 Technically, free cash flow is measured as cash from operations minus capital investment required to continue those operations. Smart investors like to think of it as cash that can be handed back to them in the form of dividends and buybacks, or used by the company to make acquisitions and other investments.

While the rest of the industry has been caught up in an M&A frenzy, Gilead has bucked the trend in favor of its shareholders. Early last year, the company announced a five-year, $15 billion share repurchase program and a $0.43 quarterly dividend. At recent prices, that equates to a 1.9% dividend yield. Again, this is well below the 3% you could earn with Johnson & Johnson's shares, but I expect Gilead can easily make up the difference in the years ahead.

Wall Street expects Gilead to announce earnings of $12.00 per share for last year, which would put its dividend payout ratio at about 14%. With the potential market for hepatitis C treatments something of an unknown, it seems Gilead has just dipped its toes in the dividend-paying waters. I'm hardly going out on a limb by predicting big increases in the distribution going forward.

Last November, the FDA approved Gilead's latest HIV cocktail, Genvoya. With an improved safety profile over its predecessors, I expect sales of the antiviral to explode in the quarters ahead.

Further down the road, Gilead's pan-genotypic hepatitis C antiviral could further cement its dominance in this highly lucrative market. The company expects a decision from the FDA by the end of June. Given the lack of genotyping capabilities in less developed healthcare systems around the globe, the new combo could help Gilead increase distributions at a healthy clip for many years to come.

A painful conclusion
As much as it hurts me to say it, dividend investors at least a decade ahead of retirement might be better off forgetting Johnson & Johnson until it shows clear signs it can return to an acceptable level of earnings growth. 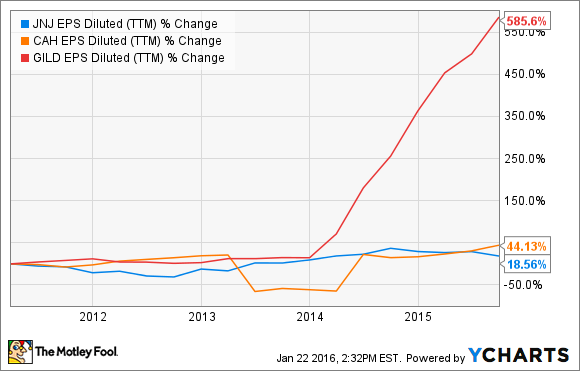 I'll admit, Cardinal Health's earnings growth over the past five years has also been less than exciting. Nevertheless, I'd like to argue that its growth trajectory is more of a sure thing than Johnson & Johnson's. The conglomerate's main growth engine -- its biopharmaceutical segment -- will constantly struggle with competing drugs from a myriad of players, not to mention eventual patent losses. In stark contrast, Cardinal Health has only AmerisourceBergen, and McKesson to contend with for a market largely expected to continue growing for many years to come.

And if desire for explosive dividend growth far outweighs your need for certainty, you'll may want to overlook Johnson & Johnson's dividend for Gilead's. Without a lumbering medical device segment weighing it down, the antiviral champ's earnings growth is unmatched by any dividend-paying company I can think of and could very well lead to equally steep dividend payout growth.